Frannie Cavanaugh is a good Catholic girl with a bit of a wicked streak. She has spent years keeping everyone at a distance—-even her closest friends—-and it seems as if her senior year is going to be more of the same . . . until Luc Cain enrolls in her class. No one knows where he came from, but Frannie can’t seem to stay away from him.
What she doesn’t know is that Luc is on a mission. He’s been sent from Hell itself to claim Frannie’s soul. It should be easy—-all he has to do is get her to sin, and Luc is as tempting as they come. Frannie doesn’t stand a chance. But he has to work fast, because if the infernals are after her, the celestials can’t be far behind. And sure enough, it’s not long before the angel Gabriel shows up, willing to do anything to keep Luc from getting what he came for. It isn’t long before they find themselves fighting for more than just Frannie’s soul.
But if Luc fails, there will be Hell to pay . . . for all of them.
I mentioned on twitter that I was going to put this book on my TBR list. Almost immediately I received a response from Momo over at Books Over Boys and Katie from Call Me Crazy YA Book Reviews singing this book's praises.  A few weeks later I was in a bookstore shopping for Christmas presents when I came across Personal Demons and bought it. A week or two later I was finally able to read it.  Now I'm able to tell you that I will start singing with Momo and Katie. This book is fantastic!!! Frannie, the main character is spunky, smart, and she can take someone out with her Judo moves.  Frannie is also having doubts about her faith. I liked this element of the story because I think it's something everyone can relate to. The story is told through the eyes of Frannie and Luc. I liked this aspect of the book. It was interesting to see the different points-of-view. Luc is a spawn of the devil. He's evil, conniving and hot in every sense of the word.  Then there is Gabe. Gabe is well, Heavenly. He makes Frannie feel safe and secure. Frannie is being hunted by both Heaven and Hell. She has untapped powers that she doesn't even know about. Frannie is also plagued by a traumatic event from the past. All of these elements made a phenomenal, fast passed, don't want to put it down, story. I loved seeing the internal struggles of all the characters. One thing in particular that I appreciated about this story is that Frannie had parents that were present in her life. So many times I've read novels and the parents are nonexistent. I also hope in the next book we get to see a little bit more of Gabe.  There were parts of this story that had me screaming "NOOOOO!" and there where parts of this story that made me want to cry.  I love books that evoke my emotions.  On a side note, when I started to read Personal Demons, Lisa Desrochers tweeted me saying she hoped I liked it. I am happy to say that I really did. Now comes the hard part....... waiting on the next book Original Sin.


Also, Momo and Katie, here's a little something for you. 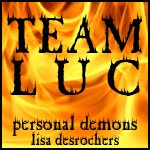