Guest Post by Pauline Jones: Not Your Great-Grandma's Corsets

By Marcie - May 19, 2011
Not Your Great-Grandma’s Corsets, Sweetie
As one who was in college during the Women’s Movement when bras were burned with considerable glee (though not my own since I couldn’t afford to replace them), I tended to regard corsets as instruments of torture. And yet I recently purchased—brace for it—a corset pattern.
It is true. I confess that I am considering making a corset.  I haven’t bought fabric yet, but the pattern is here. In my house.
I’m not thinking about it because I want to (or ever could) have a Scarlet O’Hara waist, but because, well, corsets have become fun again—or maybe fun for the first time.  Fun, you ask, with brows arched in shock. These aren’t your great-grandma’s corsets, sweetie. For one thing, your great-grandma would have worn hers under her clothes. These corsets are for making a statement. 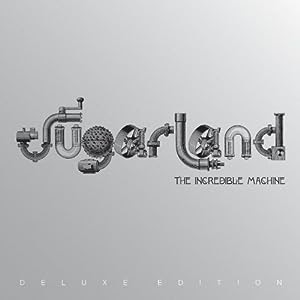 The return of the corset comes to us courtesy of a movement called steampunk and its not just corsets they bring to the table. Jeff Vandermeer points out that steampunk “embraces divergent and extinct technologies as a way of talking about the future.” It started as literature and spread into pop culture, the aesthetic seeping into movies, art, music and fashion. The upcoming Sugarland Incredible Machine tour is heavily laced with steampunk elements, including lining the stage with specially crafted vintage looking light bulbs.  And take a look at that cover----à
)

They are probably the most mainstream band to embrace steampunk (though they are by no means the first!), but both NCIS and Castle had shows with some steampunk (Castle did it better, IMHO) in their storylines.
I first heard about steampunk on The Galaxy Express blog and had to check it out because, well, I’m a sucker for quirky fiction. My first steampunk book was Gail Carriger’s Soulless. It was a lot of fun, loaded with quirky and left me with an urge to…try it myself. The closest I’d come to historical fiction was a time travel to World War II! (Out of Time) It was supposed to be a short story, but instead, I penned a steampunk/science fiction romance novella mashup called Tangled in Time, which led to me purchase a steampunk hat at ApolloCon.  I’m not exactly sure why the two events are linked, just that I bee-lined to the display after I wrote my novella. Maybe a love of hats is buried in the female psyche and steampunk sets it free? And the hats are both fun and cool.

Then I had to get my goggles on because its windy when flying an airship and one needs eye protection while working on that steam engine. And because these aren’t your great-grandpa’s goggles either. Also cool. As you can see from this one sample, the steampunk artisans have got both style and flair down for something that is generally very utilitarian. I got these goggles for one of my daughters to wear for Halloween. No surprise she got lots of comments and compliments.

While I have yet to create a “steamsona” (a steampunk persona), I did up the ante by purchasing some glasses to go with my hat and goggles. And there is that corset pattern there next to the duster pattern…
Confession time! Do you have a steamsona? Do you want one? What’s your favorite steampunk accessory? Read a steampunk book yet? How did you like it?
In honor of her visit to the blog, Pauline is offering one commenter the choice of a pdf of either Ghostly Dreamspell or Romance of My Dreams 2.

Pauline Baird Jones is the author of eleven novels of sometimes quirky peril and romance, including two steampunk/science fiction romance mash ups. The most recent is called Steamrolled, and its available in print and digital. You can find out more about her and her books at: http://www.perilouspauline.com