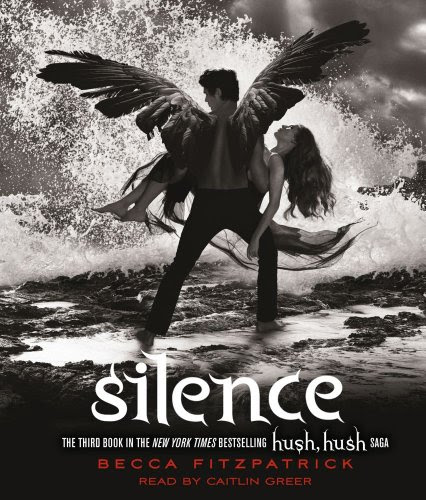 
Summary:
The noise between Patch and Nora is gone. They've overcome the secrets riddled in Patch's dark past...bridged two irreconcilable worlds...faced heart-wrenching tests of betrayal, loyalty and trust...and all for a love that will transcend the boundary between heaven and earth. Armed with nothing but their absolute faith in one another, Patch and Nora enter a desperate fight to stop a villain who holds the power to shatter everything they've worked for—and their love—forever. 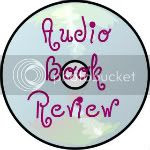 Caitlyn Greer is the narrator for Silence. She's appeared on television and has been a motion capture performer for video games, animation and film. I was eager to hear her read the next book in Becca Fitzpatrick's Hush Hush series. I thought Greer did a really good job with Nora Grey's character. She seemed to capture the emotions that the author expressed. As far as the other characters go, I have mixed feelings. For the most part I thought the majority of characters voices were okay but some of them fell flat for me. I  really didn't like the voice she used for Marcie's dad, Hank Miller. She gave him a deep, articulate, pronounces every syllable in a word voice. He. Talked. Like. This., in a sardonic tone. To me this voice was annoying. Voices aside, Caitlyn Greer read Silence beautifully. I especially liked listening to the scenes between Patch and Nora. Overall if you're a fan of this series, I think you will enjoy listening to the audio.

Silence is the third book in the Hush, Hush series. I really liked the first book, Hush, Hush but the second book, Crescendo, fell short for me. It was an okay book but Nora was a bit too whiny and insecure. So did Silence measure up?  For me it was a lot better than Crescendo. In this book, Nora has amnesia after she's been missing for months. She can't remember the past five months of her life. This leaves Nora feeling confused and angry. She takes her over-emotional state out on everyone around her. She has the feeling that the people in her life are purposely keeping things from her. Nora doesn't know who to trust. On top of all that her mom is dating her arch-nemesis's dad, Hank Miller. Nora tries desperately to recover her lost memories.
I like Nora's character better in this book than in Crescendo. Nora was angry for a big part of this book though. I could understand some of the frustration. I can imagine how frustrating it would be to lose a chunk of your memories. The story line was good. Nora is on a quest to find out what happened to her and to regain her lost memories. She also wants to find out what's up with The Black Hand. Her journey brings her in very close proximity with danger. However even though she can't remember Patch, he's always around to save her. This book has excitement, adventure and romance.
Overall this is a good read. If you're a fan of this series you won't want to miss this book. Silence is not as good as Hush, Hush but better than Crescendo. Also originally I thought this series was a trilogy but there will be a fourth book. Becca Fitzpatrick leaves the door wide open for the next book in this series. More Patch? Yes please!

My thoughts on:
Hush, Hush
Crescendo

*I received an audio book from the publisher in exchange for a review. This in no way influenced my opinion.