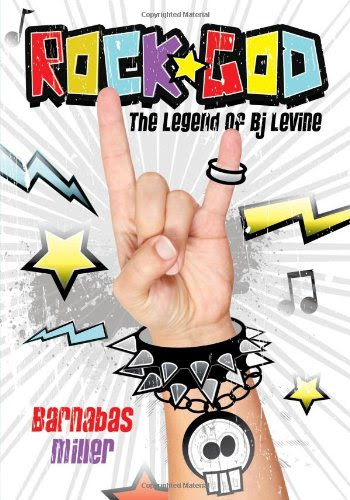 B.J. Levine, a mild-mannered, 13-year-old boy voted most likely to become a tax accountant, moves to New York City and discovers his true purpose: he must transform himself into the most almighty rocker since Jon Bon Jovi. B.J. battles his father's disappointment, his mother's disapproval, his lack of apparent talent, and a secret society of middle-aged bikers as he gathers a ragtag band and embarks on a real life rock Odyssey.

It was Barnabas Miller's long-standing love of reading that drew him to a new career as an author.  Luckily, he also has the opportunity to bring his two passions together as the drummer for the New York City-based Tiger Beat, the YA-only writers band with Libba Bray, Natalie Standiford and Dan Ehrenhaft.  His band mates are helping him launch ROCK GOD in New York City at the Barnes & Noble on the Upper East Side on Thursday, January 19th at 7pm.  They’ll be performing “Three Notes”, other music and signing their books as well.
Since the author has such a great background in music,  he’s produced a single “written and performed” by B.J. Levine himself! You can find it on the Facebook Fan Page: www.facebook.com/rockgodbjlevine.  The song is called “Three Notes”. You can also follow BJ on twitter: http://twitter.com/#!/BJrockgod