No one believed I was destined for greatness.
So begins Isabella’s story, in this evocative, vividly imagined novel about one of history’s most famous and controversial queens—the warrior who united a fractured country, the champion of the faith whose reign gave rise to the Inquisition, and the visionary who sent Columbus to discover a New World. Acclaimed author C. W. Gortner envisages the turbulent early years of a woman whose mythic rise to power would go on to transform a monarchy, a nation, and the world.

My thoughts:
Isabella of Castille is a historical figure that I would think most people are familiar with. If, of course, you paid attention in history class. She is an intriguing person because she did what other women of her time weren't allowed to do: She took her fate into her own hands. In this novel, C.W. explores the life of Isabella, from childhood to adult. Her father died when she was very young. As the kings sister, she grew up knowing what her life might behold. She had no real political desires of her own. However as fate would have it, she was destined to rule. She stood up to those who would resign her to a life not of her choosing. She married for love and ruled a kingdom.
C.W. Gortner has written a highly entertaining novel about Isabella's life. The book begins when she is a young girl who is brought to court after many years away to celebrate the birth of her brother's heir. She's not accustomed to all the finery, the intrigue, the scandal, and the backstabbing. However it's at this court she  meets Fernando, prince of Aragon, the one she is not only destined to rule with but also to unite their kingdoms . They have an instant connection but it seems for a time, fate has other plans. Their road to be together is paved by war and scandal. Isabella has to deal with her brother, King Enrique, who wants to marry her off to secure his kingdom. Defying him is an act of treason.
This novel has many ups and downs. It's a fascinating and emotional journey about one of the most famous queens in history. Gortner brings to light  fascinating details that help seal Isabella's historical legacy. This is a book I would recommend to all you history lovers out there. 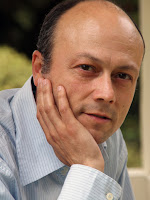 AUTHOR BIO:
C.W. Gortner is the author of The Last Queen, The Confessions of Catherine de Medici and The Tudor Secret.  He holds an MFA in Writing with an emphasis in Renaissance Studies from the New College of California.
In his extensive travels to research his books, he has danced a galliard in a Tudor great hall and experienced life in a Spanish castle. His novels have garnered international praise and been translated into thirteen languages to date. He is also a dedicated advocate for animal rights and environmental issues.
He's currently at work on his fourth novel for Ballantine Books, about the early years of Lucrezia Borgia, as well as the third novel in his Tudor series,The Elizabeth I Spymaster Chronicles (US) or Elizabeth's Spymaster (UK).
Half-Spanish by birth, C.W. lives in Northern California.  Follow C.W. Gortner on Twitter and Facebook