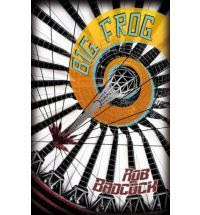 Summary:
The environment has gone crazy and most of the human race has escaped to a new planet billions of miles away.  The ones who have stayed live in vast domed cities that tower above the ruins of the old ones.  Outside the citidomes lie the dangers of a treacherous rain forest, giant elephants, and ruthless bounty hunters.
Rib Miskitoe, at fourteen, had run away from Milton Keyes Citidome where he was a student of Nanazoomology.  He now works on a lottery till.  One day he tells an old woman her lottery ticket was not a winner, but, in fact, it was.  He takes the $250 million winning ticket, gets it cashed, (with the help of his friend Kaddie) and becomes a fugitive on the run with a price on his head.
With the money in hand and a set of instructions that baffle him, the adventure begins.

Rib, although gullible at times, is a spunky inquisitive fourteen year old full of curiosity.  He is a thief with a conscience, a likable character and a friend to all he meets.
I liked how this book wound  my imagination up and let it loose as Rib traversed the rain forest and Middlemead on his way back home and to his mother.
Sometimes I got lost on this journey, but with a turn of the page I was back on track with Rib by my side.
Loving anything British, this book took me on a rollicking ride through a futuristic Britain.