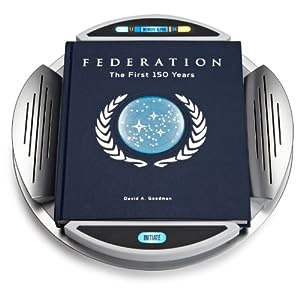 The worlds of the United Federation of Planets are revealed for the first time through a singular galactic endeavor: STAR TREK Federation: The First 150 Years (becker&mayer! On-sale: November 20, 2012; ISBN-13: 978-1612184173, ISBN-10: 1612184170, $99.00). This expansive history covers the first 150 years of the United Federation of Planets—the intergalatic democracy that governs the Star Trek universe. With more than 50 previously unseen documents—letters, treaty excerpts, and intelligence reports—highlighting historic moments that began it all, this gorgeously illustrated history of the Federation gives fans new insight into the Star Trek universe. 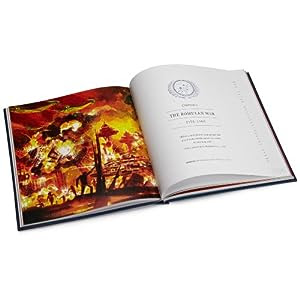 Calling all Trekkies! Becker and Mayer have the perfect Christmas gift for the Science Fiction junkie in your life, Star Trek Federation: The First 150 Years

Do you have a “Trekker”, notice I said Trekker and not Trekkie, on you gift list this Holiday Season? If so, this is a great gift. I am not a full-blown Trekker but consider myself knowledgeable. I’ve seen every episode of the original Star Trek series, as well as all of the Next Generation, and all accompanying movies for both, along with many episodes of Enterprise and Voyager, also. 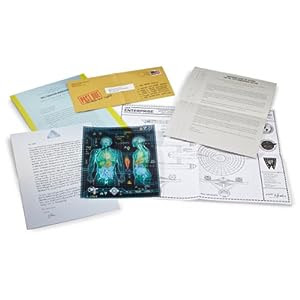 From Zefram Cochrane’s first warp-drive flight which fostered Earth’s “First Contact” with an alien species to the Romulan War to the creation of the Federation and Starfleet Academy, this book covers it all. It has beautiful artwork of a watercolor appearance that is bright and vibrant. It contains many historical documents of the time that correlate with the story. These are reproduced in great detail and when needed given a translation to English. There are many familiar characters mentioned (Kirk, Spock, Sarek, Khan) and many that you may have heard mentioned in one of the series.

A true fan could sit and devour this book for hours, nay, days even, and still not be completely satisfied. You would go back for more. I would love to just have the time to thoroughly go through everything in this book with the detail that the writers put into its creation. This book is a must-have for the Trekker in your life.

ABOUT THE AUTHOR
David A. Goodman was hand-picked by CBS to expand the Star Trek story. Goodman was writer and consulting producer for Star Trek: Enterprise, and after departing Enterprise, he was hired as Executive Producer and show runner on the revived hit animated series Family Guy. Goodman has also written for such notable shows as Futurama, for which he wrote the episode "Where No Fan Has Gone Before"—a half-hour segment that paid homage to the original Star Trek series, reunited the original cast, and was nominated for a Nebula Award. He wrote both the 2010 film Fred: The Movie and the upcoming sequel Night of the Living Fred. Goodman is a graduate of the University of Chicago and now lives in Los Angeles.

Mark McHaley is a commercial illustrator. His corporate clients include Disney, Kraft, Golden Books, and various others. Currently, he creates illustrations for properties held by Marvel, DC, Lucasfilm, 5finity, and more.

Cat Staggs has illustrated more than 130 cards for the Star Wars: Revenge of the Sith card set and works for Lucasfilm. She has produced exclusive prints for Star Wars Celebrations III, IV, and Europe, and has also illustrated short fiction for starwars.com. In addition, Cat works in the comic books and film genres, and she has completed card sets for The Lord of the Rings, Marvel Avengers, X-Men and DC Legacy, among others.

Jeff Carlisle is a lifelong Star Trek fan and freelance illustrator/concept designer for properties including Star Wars, Dungeons & Dragons, Pathfinder, Indiana Jones, Lord of the Rings, Doctor Who, and The Guild. His work has appeared across many platforms, including books, magazines, trading cards, posters, art prints, and even paper airplanes.

About becker&mayer
becker&mayer! LLC, the largest book packager in the U.S., creates innovative nonfiction books and book-plus products for adults and children in formats that integrate paper components, digital content, electronics, audio, and other specialty features for publishers worldwide. becker&mayer! books are published under clients' names, including, Scholastic, Chronicle Books, HarperCollins, Random House, and Simon & Schuster. Many of these books are created in association with licenses such as Disney, Lucasfilm, Pixar, MLB, NASCAR, and more. becker&mayer! also enjoys a long history of working in partnership with high-profile individuals, including Bob Dylan, Stan Lee, and David McCullough, and with estates representing legendary figures such as Kurt Cobain, John Lennon, and Audrey Hepburn. www.beckermayer.com