Goodreads Summary:
Traces the lives of Alexandra Greville, Jamie Ross, and others during the era between the World Wars through the observations of freelance journalist Martin Rilke.

My thoughts:
Circles of Time is the sequel to The Passing Bells. I have to say that I like this book just as much, if not more, than the first. The war is over and now begins the reconstruction not only of building, but also of lives. "The horizons have been expanded" in every direction. The line that divided the classes no longer existed. This is one of the major themes of this book: Exploring this new age. Once again the book focuses on Martin. He's from Chicago, but spent many years during the war as a journalist. He's written a book about the war that is getting a lot of publicity; both good and bad.
One of things I liked most about this book is that we learn a lot more about the Greville family through Martin. After the mental breakdown of their son Charles and the unconventional path led by their daughter Alexandria, the family is thrown into a sort of tailspin. The Greville family has always been set in their traditional ways. However with the tide of change they must learn to sink or swim.
Rock did an excellent job portraying the effect that the war had on people. The changes that England as well as many other countries went through. The horrors and the joys. This is a series I would recommend for anyone who enjoys shows like Downton Abbey, or books about World War I.

The Passing Bells
Circle of Time
A Future Arrived 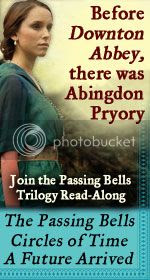