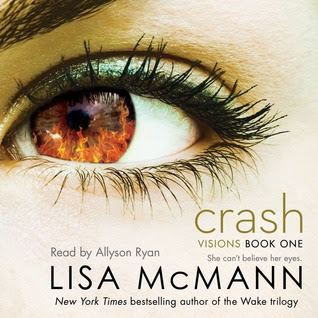 Jules lives with her family above their restaurant, which means she smells like pizza most of the time and drives their double-meatball-shaped food truck to school. It’s not a recipe for popularity, but she can handle that.
What she can’t handle is the recurring vision that haunts her. Over and over, Jules sees a careening truck hit a building and explode...and nine body bags in the snow.

My thoughts:
I've enjoyed several books by Lisa McMann, so I was excited to read Crash. Though this story was good, it was not great. The story line is easy to follow but it failed to captivate me. The story centers around Jules. She's a normal teen in every way except she has visions of a crash that involves her families nemesis and the boy she's had a crush on for the longest time. She struggles with telling anybody less they think her crazy. However the more she tries to ignore the visions the more intense they become.
Jules is a good character. She has a difficult situation. Jules's relationship with Sawyer kinda reminded me of Romeo and Juliet minus the poison and dagger. Their families have a tumultuous history with each other that leaves you wondering what exactly happened. The whole story centers around Jules trying to figure out a way to save the people in her vision. There were times that the book was rather slow, but the last few chapters of the book were really excited and had me on the edge of my seat. In fact it was the last half of the book which saved it for me. Overall it I liked this book, but it wasn't my favorite by this author.
I listened to this on audio. It's read by Allyson Ryan who did a great job. I thought she found her inner Jules really well.