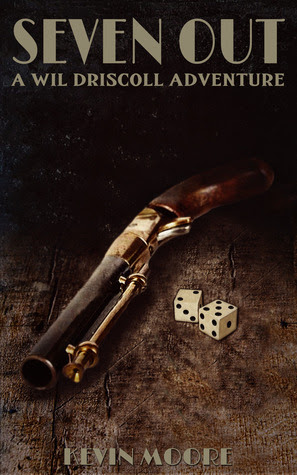 1. The title of your newest book is called Seven Out. Why did you choose this title for your book?
"Seven Out" is actually a term from the game of Craps. Most people think it's always good luck to roll a seven in Craps, but the majority of the time it's a bad thing. When you "seven out," the dealer clears the table of chips and takes all your money! Seven Out opens with Wil Driscoll and his partner in crime, Albert Crow, playing Craps in the casino on board a Mississippi riverboat while they wait for their contact who has information on a valuable historical artifact. That idea of "sevening out" is also a theme I carry throughout the story.

2. Describe the main character, Wil Driscoll.
Wil is a good guy at his core, but you would have to get to know him a long time before you would ever realize it. He's greedy, jaded about life, distrustful of others, a bit of a womanizer, and he has a penchant for being in the wrong place at the wrong time. Many heroes are almost Olympian in nature. What I mean by that is: they're infallible, they are the best at whatever it is they do, they always know the right thing to do at exactly the right moment and they always sail away into the sunset at the end. Wil certainly has his moments, but he's a broken hero. His moral compass doesn't point due North. Sometimes, he just isn't up to the task.

3. Why did you spell his name with only one 'l' instead of two?
I actually met a Wil with one "l" in college at about the same time I was writing Wil's origin story. I thought it was extremely unique, so I tried it on for a few pages and it fit perfectly.

4. Wil Driscoll seems like a scoundrel. What sort of shenanigans can readers expect from him in the future?
I hope to publish several more Wil Driscoll Adventures as short stories that can be read in one or two sittings. I think the action serial is a genre that has unfortunately been forgotten in reading culture for some time. The next short I plan on writing will take place in my hometown of Toledo circa 1930. I think that will be a fun little research project for me, and I hope it will be a fun read for members of the community. I also plan on taking Wil abroad and seeing how much trouble he can get into in a much larger work, but more on that in Question 7.

5. How has your love for history influenced your writing?
For me, there's a deep level of enjoyment when I write an historical fiction. LIke you said, I do have a love for history and I even chose to pursue a master's degree in it. I'm a nerdy guy who likes research. In fiction, I like being able to recreate an era that's no longer with us. You would be surprised how many things we take for granted that need to be double checked in an historical fiction. For example, Wil walks into a room and switches on the light. Wait a minute, this is the 1920s. Does his location have access to electricity? Research reveals that if he's in a major city, yes, but if he's in the country, no. I try to get things as historically accurate as possible, and in doing so I try to educate my readers in an entertaining way.

6. If you could have dinner with any historical figure, who would it be? why?
George Washington, hands down. He's a very interesting figure in what I think is one of the most interesting times in human history, the tail end of the Enlightenment. George Washington has been called "The Indispensable Man," the linchpin behind whom everyone could rally. He's kind of an unlikely candidate for a great leader. Yes, he was an elite, but he wasn't the intellectual powerhouse that Jefferson was and he really wasn't that great of a general. But there was something about his character that inspired people. Interestingly enough, with that same charisma, he could have declared himself king and ruled for the rest of his life, but instead he became the first man to willing surrender the power of Caesar at the end of his second term.

7. So far, all of your books have been short stories. Do you have any plans to write a full-length novel?
I am currently drawing up ideas for a full length novel, which I hope to write this summer. Wil and Albert are on their way to North Africa to track down a legend from the ninth century. I will likely release a couple more short adventures before I finish the novel. I'm inspired by the way Sir Arthur Conan Doyle utilized both novels and short stories to construct Sherlock Holmes and I want to adopt a similar approach to the Wil Driscoll "universe."

8. What is your favorite restaurant in Toledo?
As of late, I've been really liking a place called Balance Pan-Asian Grille, which has two locations in town. Their cuisine is a fusion of Korean, Chinese and Thai. It's pretty awesome.

9. What book are you currently reading?
I like to read two books at a time, one in audio during my commute and one in hard copy. The audiobook I'm listening to is Edmund Morris' The RIse of Theodore Roosevelt, which is the latest contribution toward my goal of reading a biography on each president. The other book, which I am physically reading, is The Arabs: A History by Eugene Rogan. I'll give you a guess as to why I picked up this five-hundred page monolith.

10. If you had to relocate to the moon, what three items would you make sure to bring with you?
Assuming I get to have my space suit as a freebie, I would take a Bible, the extended cut of The Lord of the Rings movie trilogy (plus associated equipment to play said trilogy) and one of those PODS moving containers filled with pens and paper for writing.
a Rafflecopter giveaway