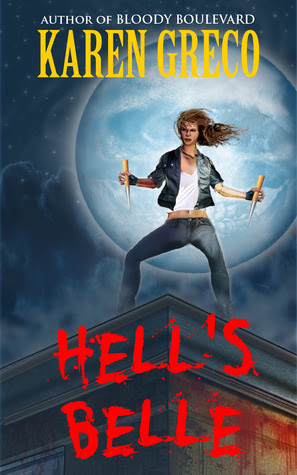 I don't always listen to music while I write, since it can be distracting, particularly when I am struggling with a section! But I do get inspired by it when I listen while working out, or driving, or taking a walk. A lot of the music that inspired this book is firmly rooted in the 90s. I suppose that's because that was the last time I lived in Rhode Island. Many of these songs blasted out of my radio as I cruised around Providence. Hope you enjoy listening to the songs as much as I do!

Mexican Moon by Concrete Blonde
This song really sets the tone for the whole novel. It really reflects Nina's life before Providence. Concrete Blonde was a huge influence on the tone and feeling of the novel, especially the sort of prequel that I have in my head about her life in Nevada, and living in the middle of the desert, and even her very brief experience as a small child in Mexico. This song evokes that.

Pretend We're Dead by L7
This is very much a "question authority" anthem, and I think it emulates what Providence has turned into. The city was overrun by supernatural factions because politicians didn't bother to clean up the financial and social mess that the city had become. The despair of a city calls out to the monsters, and they move right in and feed off of it.

Wonderwall by Oasis
This is a song about unrequited love, and I can't say who it belongs to without spoilers!

The Dolphin's Cry by Live
OK, same with this song. But this person does believe that love will win in the end. It's pure faith in both of them.

Tomorrow, Wendy by Concrete Blonde
I love this song. It was actually written about a woman who had AIDS. It was written a while ago, back in the late 80s/early 90s, when AIDS was still a death sentence. And I think this song is about Wendy accepting that she is going to die, and being ready for it, facing it head on. And that's how I see Nina. If anything, she's pragmatic. She knows that she's fated to a certain destiny. And she may not be happy about it, but she's not going to hide from it.

The Dresses Song by Lisa Germano
This is how Nina feels about Max when she first meets him. Nina's vampire hunter life dictates her wardrobe, so she is either in workout gear or some variation on jeans or cargo pants. And she's okay with that. She's comfortable with being her bad-ass self. But when she meets Max, she is suddenly aware that she's a woman.

I'm Too Sexy by Right Said Fred
Frankie is so totally hearing this song when he sees Max for the first time. Max is West Coast surfer boy hot with ripped muscles from riding waves. Frankie is completely threatened by him. So Right Said Fred is Frankie's way of mocking Max.

It's My Life by No Doubt
This is a cover of Talk Talk's song. Nina's a rebellious spirit, and she probably hums this a lot, especially when she's getting crap from Frankie, Babe and Dr. O for being too headstrong.

I Melt With You by Modern English
This is so the song that I imagine Nina playing when she's getting ready for her date with Max. This song reminds me so much of being a teenager and that feeling you get when getting ready for a date with a boy you thought was really cute. That's exactly how Nina feels at that moment.

Demons by Imagine Dragons
This is Max's song all the way, and I can't say much more without spoilers. But it turns out that he's not at all what he appears to be, and that comes as a shock to him as well as everyone else. And Nina may very well be the only person who can truly understand him, and potentially "heal" him.

Last Night Here by Kill Hannah
If there was ever a perfect song for the ride in the car to the farm house, at the end of the novel, this is it. Again, can't say much because of spoilers, but it's absolutely right for riding down a winding and deserted country road in the middle of a night in a snowstorm, particularly considering what they are riding towards. Unfortunately this track isn't on Spotify, but it's a good one. Well worth a Google search.

About the book:
Half-vampire, half-human, Nina Martinez spent most of her life underground as part of an elite secret team of government agents who quietly take down rogue monsters, the human world none the wiser. She moves back to her hometown of Providence, RI to keep an eye on the recent uptick in supernatural activity, and to help run the bar she co-owns with her aunt.

Her attempt at a “regular” life, not to mention a budding relationship with smoking hot FBI agent Max, is cut short because of a string of ritual murders targeting the city's community of witches.

But Nina's investigation unearths deadly secrets from her long buried parents. Now the target of supernatural assassins, could Nina be the most dangerous vampire hybrid to ever exist? No wonder she can’t get a date.

"A damn fun read and I enjoyed the ride!" David Johnston (Busted Jesus Comix, Mothra Is Waiting) Find out more about the author and her books by following her on Facebook and Twitter.

*Giveaway*
Karen Greco is generously giving away 5 e-copies of Hell's Belle to our lucky readers. You must be at least 13 years old to enter, but this book is better suited for a mature audience (18+). The e-copies are in .mobi format, so it will only work on a kindle of the kindle app. (It's  free if you don't have a kindle. Click here