The Rim of the Grand Canyon by Catherine Brophy

I’m puzzled by people who put limitations on their lives.   And more puzzled when they boast about it.
“I’ve never been outside  X (insert town/county/ state)” they say proudly as though people who travel are denying their roots.
“I’ve never read a book in my life.” They boast as though that makes them salt-of-the earth.
“Pop music is rubbish.”  They sniff as though that means their musical taste is impeccable.
I’d have thought that life flings us enough limitations without inventing more
They remind me a woman I met on the rim of the .     We were travelling in the western    We’d been to Yosemite, Mesa Verde, and our eyes were sated with beauty.   Next stop the .   But we hadn’t booked a room and as it was the start of the tourist season we feared that the hotels would be full and we’d have to keep driving.
We drove all day and at last began to see signs saying “Viewing Area.”  We must be close but the sun started slipping out of the sky and still we weren’t there.  We stopped at the next viewing point so that if we couldn’t get a room at least we’d have seen the .
Creaky from the drive we climbed to the viewing platform and…. I feel breathless remembering… we burst into tears.   The Canyon was so staggeringly awesome, so shockingly beautiful, such a furnace of reds and purples and oranges and golds… that we could not speak… we just let the tears stream down our faces.   “If I have to sleep in a ditch,” I vowed, “I am staying.”
We did get a room and next morning made for the rim of the canyon.  There are no words to describe it.   No music, no pictures, no photos no film can do it justice.  It’s something you just have to experience.   I sat on a bench at the edge just staring, filling my soul with the wonder.   A woman sat beside me. She faced away from the view.
“You have to turn round.” I said.
“No,” she replied, “I’m not going to look.”
“Why not?”
“I didn’t want to e here. My husband forced me to e so I’m not going to give him the satisfaction of looking.”
“But it’s one of the most spectacular sights on the planet! “
“I don’t care, I’m not looking.”
And she didn’t!    I hope it made her happy.


’s like that, when there’s all this fabulous stuff available why limit yourself to one or two types of writing?   There are so many treasures out there.  Until I got married I was a book snob, I limited myself to “good” literature and who-dun-its.   One night I went to bed to find my new husband reading a ic.  Gasp!  Shock! Horror! But he opened my head to graphic novels, sci-fi, fantasy, vampires and horror as well as science, biography, philosophy and travel -  anything in fact that’s well written.   And that wealth informs my own writing.   I don’t write philosophy or science I write edy and some fantasy.    My latest novel BURNING BRIGHT is a edy inspired by trash T.V.!   It’s about celebrity and money and it will make you laugh.   Give it a try. 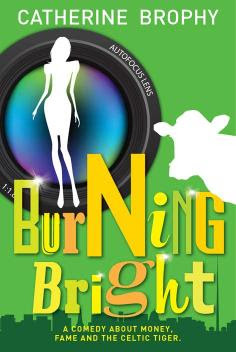 A COMEDY ABOUT MONEY, FAME AND THE CELTIC TIGER

The Celtic Tiger is in his prime and the Kerrigans are splashing the cash.  They have made it big time, so eat your heart out you small town snobs!  But Daddy’s-girl Kirsty wants International Celebrity and devotes herself to this dream. She crashes Madonna’s Christmas party but that doesn’t help.  She goes on Big Brother and causes a stir but doesn’t help either,  However, when a You Tube video of Kirsty goes viral, fame arrives with a bang.   But Tracey O’Hagan, a blast from a shady patch in the Kerrigan past, has appeared on the scene. She’s mad. She’s bad. And she’s definitely dangerous to know.
Burning Bright is told in the voices of Kerrigan family members and friends.   It’s funny. It’s believable. And it will definitely make you laugh.

ABOUT THE AUTHOR:   Catherine Brophy is a writer, story-teller and broadcaster.   She writes film, T.V. and radio scripts and she also writes short stories. Her previous novels are The Liberation of Margaret Mc Cabe and Dark Paradise.   She lives a blameless life in but escapes whenever she can.   She’s been rescued by a circus troupe in , had breakfast with a Zambian chief, ate camel stew in the , and was kicked by a horse on the Mexican plain.