Anyone But You Cover Reveal and Giveaway

Authors Kim Askew and Amy Helmes are excited to offer a sneak peak at the third book in their “Twisted Lit” series of Shakespeare-inspired YA novels. This time around, they’ve put their unique spin on Romeo & Juliet. Published by Merit Press, Anyone But You will be released in January, and is currently available for pre-order at Amazon.com, Barnes & Noble and Powell’s.

Anyone But You: A Modern-Day Spin on Shakespeare’s Romeo & Juliet
by Kim Askew and Amy Helmes
(Book #3 in the Twisted Lit series)

Summary:
Two Italian restaurants, both alike in dignity, in Chicago’s Little Italy where we lay our scene... After her family’s struggling eatery, Cap’s, falls prey to another of the Monte clan’s vicious and destructive pranks, sixteen-year-old Gigi Caputo finds herself courting danger during a clandestine encounter with Roman Monte, the very boy whose relatives have brought her family such grief. When the daughter and son of these two warring factions fall for each other, their quest to mend this bitter family feud turns out to be a recipe for disaster. Their story is irrevocably linked to the summer of 1933, when two twelve-year-olds, Benny and Nick, hop the turnstile at the Chicago World’s Fair. While enjoying some of the fair’s legendary amusements, Nick has a “love at first sight” encounter with Stella, a young girl who unintentionally causes a lasting rift between the two boyhood pals. Deftly winding its way through past and present day, this modern take on Shakespeare’s Romeo & Juliet has much to do with hate — but more with love.

To kick off this event, I have a copy of Exposure to giveaway to a lucky reader. Check out the details below: 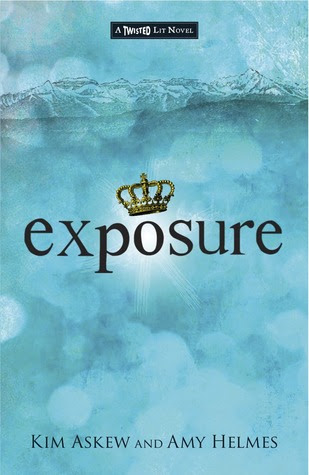 Double, double, toil and trouble. Sometimes, the quest for high school royalty can be deadly! In this emotionally-charged twist on Shakespeare’s Macbeth, a self-conscious shutterbug named Skye Kingston navigates a treacherous school year in Alaska fraught with unspoken secrets and tragic twists of fate. Along the way she encounters three strangely prophetic BFFs; one social-climbing, sociopathic cheerleader; and a heart-stopping hottie named Craig McKenzie: the man who would be Prom King. Can Skye save the boy she loves — and herself — before they get caught in the crosshairs?

Amy Helmes Anyone But You Cover Reveal giveaway Kim Askew