Doctor Who Rewatch, Season 1, Episodes 2 and 3

We're re-watching Doctor Who this fall to prepare for the big anniversary special. I know that Doctor Who has been around for 50 years, but for time sake we're going to start with series 1 of 2005. If you've not watched it, but have wanted to. Here's your chance. We're watching via Netflix, so join us if you can. This is week we're discussing Season 1, episodes 2 and 3.

Episode Summary: The Doctor takes Rose to view the end of Earth.  Literally. The planet is going to be destroyed. It's not as catastrophic as it sound, though. It's way, way, way into the future. The date is 5.5/apple/26. Yeah, I don't know what that means either. Earth has been emptied and it has been for some time. Somewhere between now and way into the future, Earthlings have found a way to live elsewhere. To boldly go where no man has gone before. So it's not as bad as it sounds, and Rose has a front row seat. However I loved the music choices they played for this: "Toxic" by Brittney Spears and "Tainted Love" by Soft Cell   And of course nothing is ever quid pro quo with the Doctor, so trouble ensues and he has to save the day.
There are a lot of aliens who have gathered to watch the implosion. Here are some of the more notable ones:

This is the steward of platform one, the satellite where the group of aliens are waiting to watch the end of the Earth. I think this is what smurfs evolve into in the future.

"Moisturize me." The Lady Cassandra. She's the last 'pure' Earthling. And a cautionary tale if I ever saw one. Ladies and gents take note of what happens when you get way too much plastic surgery. 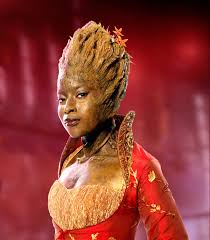 This is Jabe. A tree-like alien. In the beginning she exchanges gifts with the Doctor. She gives him a sapling of her ancestors and he gives her the breath of his lungs. And she's like, 'how intimate' and they proceed to flirt with each other. Jabe then asks the Doctor is Rose is his concubine or prostitute. Which I guess is not only common but also insulting.

The Face of Boe. We don't really know who this is, only that he's important. He's also accompanied by more Smurfs.

This is a really good episode. We get to see the Doctor's dark side a little bit. Also it brings up themes such as death, regret, and endings.

Episode Summary: After the last trip, the Doctor decides to take Rose back to the past to 1860, but instead they turn up in 1869. Where they happen upon Charles Freaking Dickens. Charles is giving a performance of A Christmas Carol when he notices a weird occurrence in the audience. Of course, the Doctor and Rose show up at that exact moment. Instead of being scared, they're exhilarated by it. Rose follows two suspicious character who we know as the undertaker and his

maid. "The stiffs are getting restless again" is never something you want to hear when dealing with corpses. Rose is abducted by the undertaker and Charles and the Doctor give chase. To make a long story short, the doctor, Rose, Dickens, the undertaker, and his maid hold a seance in which they find that aliens, the Gelth, are trying to break free. The maid, Gwyneth, is clairvoyant. She calls them her angels, but we learn they are anything  but angels. We learn some great life lessons in this episode, such as don't trust ghost-like creatures. EVER. And Charles

Dickens is a bit of a coward who loves flattery, but it would still be cool to meet him. And most importantly, there are a lot of people walking around on Christmas in 1860's. Also and most importantly, I think, is the phrase "Bad Wolf". The maid uses it when she 'reads' Rose. It's very mysterious, don't you think?

Doctor Who rewatch Episodes 2 and 3