We're re-watching Doctor Who this fall to prepare for the big anniversary special. I know that Doctor Who has been around for 50 years, but for time sake we're going to start with series 1 of 2005. If you've not watched it, but have wanted to. Here's your chance. We're watching via Netflix, so join us if you can. This week is Episode 1.

Episode Summary: Rose Tyler is attacked by plastic mannequins. She's saved by a mysterious man who seems to know something that she doesn't about the mannequins. He ends up blowing up the building and thus leaving Rose unemployed. This mystery man sets Rose's curiosity into overdrive. She starts to do a little investigating on her own about the man in the blue box and comes across a website of a man named Clive, who is also looking for the doctor. She goes to meet Clive with her boyfriend Mickey. While Rose is talking to Clive, Mickey gets attacked by a trash can. You read that right. He got attacked by a trash can. He's replaced by a plastic duplicate of himself. However Rose obviously isn't that observant and has no idea that her boyfriend is now a Ken doll. When plastic Mickey starts acting 'weird' the Doctor shows up just in time to save her. the Doctor explains to Rose they must find the Nestene Consciousness that is controlling the plastic or the human race is doomed. The Doctor and Rose, though mainly Rose, saves the day. The Doctor invites Rose to be his companion and after some contemplation, she accepts. This is a great introduction of this series to a new generation. It's a little corny but a lot of fun to watch.

Let's meet the characters of thus far of Season 1:

The Doctor:
The Doctor is played by Christopher Ecclecston. He's quite mysterious in this episode. We don't really know who he is or where he's from. He dodges questions about himself whenever Rose asks them. 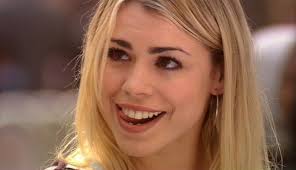 Rose Tyler
Rose Tyler is played by Billie Piper. She is around 18/19 years old. She's desperately looking for something different in her life. She doesn't realize that when a strange man grabs her hand and says 'run' her whole life if going to change. She has street smarts and a sense of adventure. Although not realizing her boyfriend is a giant Ken doll puts a strike against her.

Mickey Smith
Mickey Smith is played by Noel Clarke. He's Rose's boyfriend. I have no idea how long they've been together, but girl you could do better. In this episode Mickey is a coward. He clings to Rose like a child would his mother. Granted I think fear would be a definite reaction after learning that aliens do exists, but this guy needs to turn in his man card.

Jackie Tyler
Jackie Tyler is played by Camille Coduri. I really like Jackie Tyler. The first time she meets The Doctor she flirts with him! Anywho, she's kinda flighty but has Rose's best interest at heart.

The Tardis
We can't forget the Tardis. The Tardis may look like a police box that was used until the 1960's, but it's actually so much more. Tardis stands for Time And Relative Dimension(s) In Space. It's a lot bigger on the inside than on the outside. 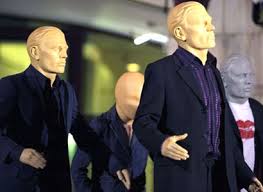 The Mannequins are the monsters in this episode. Actually they're called Autons and are controlled by the Nestene Consciousness. Which kinda sounds like a bad cold. And let's face it, they're creepy. Have you ever noticed that their eyes follow you  throughout the store. I bet they do come alive at night and terrorize people. This is not paranoia, this is vigilance. If you ever notice something strange, be sure to look for the man in the blue box.