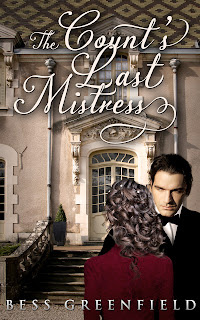 1. In 140 characters or less, please tell our readers about your novel, The Count's Last Mistress.

Paris, 1871. A French cavalry officer and an American painter become entangled as they try to solve a tragic mystery and decide the fate of an abandoned child.

(I have a more detailed summary available as well, but it’s more than 140 characters.)

Paris, 1871. In the aftermath of war and revolution, cavalry officer Olivier Valencourt, the comte de Chaumenay, only wants peace. But his discovery of his deceased brother’s child in a Montmartre hovel leads to a battle of wills with the lovely but evasive American struggling to provide for him. Determined to gain custody of his nephew, Olivier sets out to win the audacious bohemian’s trust with patronage and patience, but her courage, wisdom, and innocent sensuality divert his agenda.

Painter Jeanne Delancy has good reason to despise the portrait-worthy count before she ever meets him. She believes he’s the man who seduced and deserted her friend long ago. Unfortunately, the talented and persuasive Olivier is hard to dislike or resist in person.

Conflicted by loyalty to her missing friend and her duty to the abandoned six-year-old she’s vowed to protect, Jeanne feels obligated to give the war hero the opportunity to prove he’s worthy of knowing his son. But the independent woman who thinks herself immune to temptation underestimates Olivier in many ways and reveals far more than she ever anticipates. While the strong-willed opposites struggle to reconcile their deepest longings, dangerous alliances and scandalous secrets threaten a tragic repetition of history.

2. What is the biggest challenge you faced writing a historical romance?
Trying to get the historical descriptions exactly right was challenging. For instance, at the opening of my story, Paris is under reconstruction after the Franco-Prussian War and the Commune of 1871. I obsessed over those descriptive details.

I also found it challenging to stay true to nineteenth century attitudes and still create a likeable hero. Rich, aristocratic gentlemen in France at that time tended to be on the arrogant side because they were the privileged minority and they knew it. Come to think of it, I think we encounter that flaw occasionally in modern day America as well. There was also a great deal of chauvinism. These attitudes are off-putting by today’s more egalitarian standards, and yet as an author I didn’t feel I could pretend they didn’t exist.

3. Are any of the characters in this book based on or inspired by anyone living or dead?

Jeanne, my heroine, was inspired by Mary Cassatt, who was a remarkably bold nonconformist for her time. Jeanne’s mentor was inspired by several French painters I’ve read about, but I won’t name them since the association would not be flattering.

4. You're currently working on the sequel to this book. How many books do you have planned for this series?

I plan three in all, each centering upon a different member of the Valencourt family. The next is set mainly in Manhattan in the 1890s.

5. You've recently joined Twitter. What do you think are the pros/cons of this social media site.

As you may have noticed from my tweets, I’m a complete novice at Twitter. I like words and don’t like reducing my thoughts to 140 characters or less. Tweeting seems so random and out of context to me. Goodreads, on the other hand, appeals to me and seems to relate more directly to what I do so I spend more time there. The major con of social media sites in general is that they are time consuming and distracting.

6. You cycled through France when you were 14. That must have been really cool. What did you learn from this experience?

I was astounded by the generosity and kindness of the French farmers we met along the way. They waved to us and gave us water. Once, they even picked cherries for us. The experience made me feel connected to another culture, instilled a feeling of goodwill toward humanity, and gave me a lifelong love of travel. I’ve had even more amazing experiences like that in Brazil. I was invited into a family’s home, and they gave me a meal and helped me find lodging. Looking back on it, I guess I was a little too trusting of strangers, but I met some wonderful people because of it. I suppose it inspired some of the events in The Count’s Last Mistress.

7. Where is one place you'd still like to travel?

Ireland. I think I would enjoy the people, the architecture, and the greenery. I lived in England for two years with my family, and we never got around to visiting Ireland because there was so much to see in England and we ran out of time.

8. Who is your favorite author?

Thomas Hardy. I love his strong female heroines. They were unusual for that time period. The way he describes the struggle to rise above circumstance and fate and the devastation that comes with failure leaves me in awe. I’m also a big John Steinbeck fan for his descriptions of the land and his understanding of human nature.

9. What was the worst job you've ever had?

Working as a waitress at a so-so pizza restaurant for one summer when I was 16. It was my first real paid job besides babysitting and I chose poorly. It wasn’t hard work. It was just so boring. My co-workers were unenthusiastic, the atmosphere was dull, and the food was bland. I should have quit and found a job at a more interesting place, but I was a teenager and didn’t think I could get another job. My subsequent waitressing jobs (and there were many) were far more memorable.
10. What do you do when you're not writing?
I’m a lawyer and practice on a part-time basis. I’m also a mother of three so much of the rest of my time is devoted to my children. Each one is so different, and I want to help them become happy, productive, well-adjusted adults. It’s a challenging, ongoing project.

Also, we’re in the process of moving from Virginia to Colorado. The planning, preparing, and logistics of the move have taken up a lot of time and energy for the last six months. We’re ready to be done with transition and begin our new life in Denver.

To find out more about this author, visit: www.bessgreenfield.com
To purchase The Count's Last Mistress click here.