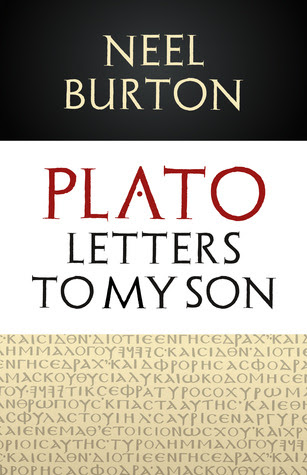 1. Please give our readers a brief description of this book.
‘Letters to my Son’ is inspired by an obscure and apocryphal fragment in Diogenes Laertius purporting to be Plato’s will, in which the great philosopher bequeaths all his belongings to his adopted son Adimantes. The book consists of the imagined deathbed letters from Plato to Adimantes.

2. Why Plato?
Plato is perhaps the most impressive of all thinkers, in fact, of all men. I first read him a long time ago whilst on holiday in Venice and it moved me to tears. He doesn’t offer only abstract ideas, but also real solutions to the problems of living. He is so much more than people think, so much more than just the cave or the Republic or the Theory of Forms. I really wanted to tell everyone about him, not just what he thought but also how he lived, how he became who he became, and how he saw the world. When you look at the world through the eyes of a man who lived more than 2,000 years ago, it tells you a lot about what the constants are, about what it really means to be human.

3. How hard was it to get inside Plato's head for this book?
I knew that I could write this book because I had already written a book on Plato. I had read all of his works line by line, and was intimately familiar both with the person and the period. I have a strong affinity with Plato’s thought: just like him I am a strong idealist, and when I was writing in his voice I had to be very careful not to blur myself with him—and also not to blur him with Socrates who was his teacher and major influence, and whom he often used as his mouthpiece.

4. How much research did you have to do? What was the most interesting thing you came across?
Given that this is a work of historical fiction, creating my characters involved a lot of painstaking research. The characters who really stand out are Plato and his teacher Socrates, but there is a large supporting cast of historical figures such as Aristotle, Diogenes the Cynic, and Xenophon. It was a tremendous challenge to bring such great characters to life. In particular, I really enjoyed portraying the relationship between Plato and Socrates. For example, did they or did they not sleep together?

5. If you were dying, whom would you write a letter to?
That’s a very interesting question. I think I have already written that letter in the form of a book entitled ‘The Art of Failure’. I wrote it for all those misfits who are struggling to find a better way to live.

6. You've written several nonfiction books, what made you decide to take the leap into fiction?
Yes, I have, and ‘The Art of Failure’ is one of them. I should start by saying that I did not choose writing, it chose me: it found its way into my blood like some sort of holy madness. In the beginning, I wanted to be a doctor, but, after qualifying, writing gradually got the better of me. First I started writing medical books, then self-help, then non-fiction, and, at last, fiction. I took the leap into fiction simply because I felt able to. I love living in my head, it’s the only place I find peace or sense; and, yes, I have a real need to communicate—and what better way to communicate than to tell a story?

7. You're a writer, psychiatrist, teacher, and philosopher. Out of all of these, which is the most challenging?
It’s so easy to be something or other, to define oneself, to limit oneself. The most challenging thing is to be no one, nothing: simply to be alive and in the moment, to commune with what it means to be human, to see the world through the eyes of eternity.

8. You're also a wine lover. What is it about wine that has made a lover out of you?
You’re full of great questions, thank you. When you open a bottle of, say, Lafite 1961 (I can always dream!), what you are drinking is the product of a particular soil, a particular climate, the weather in that year, and the love and labour of a man who has since died. The wine is still changing, still evolving, always different, so much so that no two bottles are ever quite the same. By now, the stuff has become incredibly complex, almost ethereal. Without seeking to blaspheme, it has become something like the smell and taste of God. Do you drink it alone? Never. The better a bottle, the more you want to share it with others: and that is the other incredible thing about wine, that it brings people together, makes them talk to one another, laugh with one another, fall in love with one another. That is what we remember on our deathbed.

9. I've never visited the UK before. Where is one place you'd recommend should I ever travel there?
Oxford is the most beautiful place, completely out of this world—and I mean that quite literally. The best thing about it is not the mediaeval spires or the countless churches and gardens, but all the interesting people that you meet. Here at last is a city that dares you to be provocative, dares you to be free.

10. What is a book (Besides one of yours) you think everyone should read?
The Phaedrus, by Plato.

Check out http://www.neelburton.com/ to find out more information on this author and his books.