Doctor Who rewatch Season 1, episodes 6 and 7

We're re-watching Doctor Who this fall to prepare for the big anniversary special. I know that Doctor Who has been around for 50 years, but for time sake we're going to start with series 1 of 2005. If you've not watched it, but have wanted to. Here's your chance. We're watching via Netflix, so join us if you can.  This week we're watching episodes 6 and 7.

Summary: So Rose and the Doctor receive a distress signal that leads them to a museum of sorts. The museum is really cool and creepy. It has a ton of alien artifacts in it. They find out

it's run by Henry Van Stratten who likes to collect one-of-kind artifacts. When is helicopter descends upon the museum the controller says, 'Bad Wolf descending,' Once again the phrase makes it's appearance in an episode. Anyway Stratten shows the Doctor his latest acquisition. It turns out that Stratten has the Doctor's nemesis, a Dalek. The Dalek is being tortured, but the Doctor doesn't have any sympathy for it. The Doctor proudly tells the Dalek that he helped destroy his race, and the Dalek is the last of his kind. As is the Doctor. The Dalek tells the Doctor that they are the same. Which is pretty much a slap in the face. Meantime, Rose is flirting with Adam, a guy who works in the museum. He shows Rose footage of the Dalek being tortured and it invokes Rose's sympathy. She goes to the room where the Dalek is and speaks with it. She touches the Dalek and it soaks in her DNA, which refreshes the Dalek.

The Dalek goes on a killing spree, but leaves Rose alive. The Dalek starts having feelings, 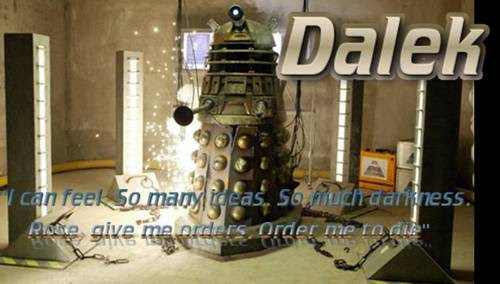 which freaks it out. While trying to get the Dalek back under control, the Dalek asks the Doctor for orders since he has nobody to take orders from. The Doctor tells it to kill itself, and the Dalek replies, "You would make a good Dalek," Which is another slam towards the doctor. The Dalek starts freaking out even more about its new found feelings. The Dalek needs direction and asks Rose what its orders are. Rose asks what it wants and the Dalek reveals it wants freedom. The Doctor is still on a rampage and is ready to kill the Dalek, but Rose stands in his way. You see the darkness that dwells within the Doctor and Rose as his savior. The Dalek reveals what he looks like inside the medal exterior. He's nothing but a small octopus-looking creature. The Dalek ends up destroying itself, and the Doctor and Rose  leave the museum with Adam in tow.

Life Lesson: Sometimes the good guys are bad and sometimes the bad guys are not so bad. If this Dalek doesn't invoke your sympathy, you're dead inside.

Also we could make a drinking game out of this series. Every time someone says run, take a drink. 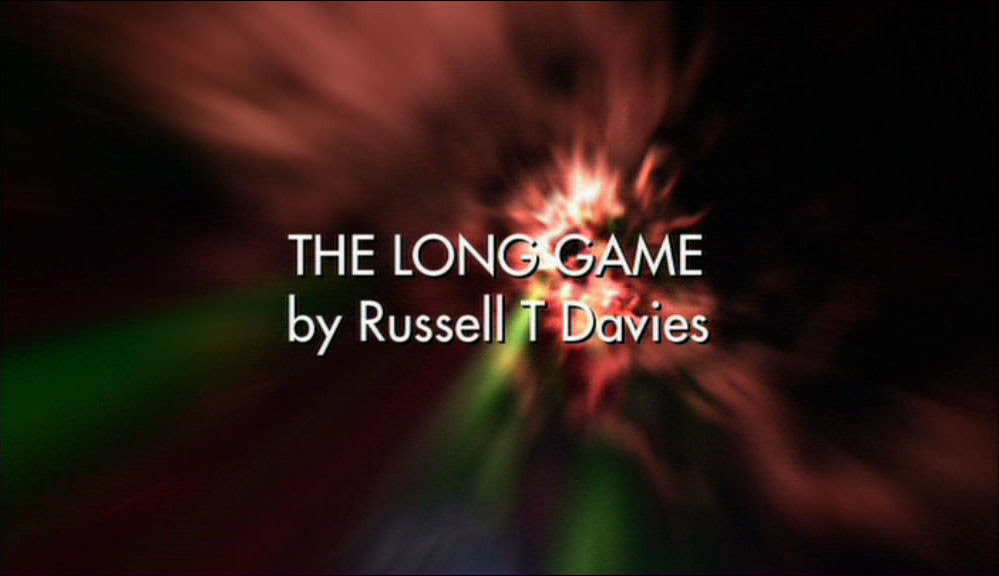 Summary: In this episode, Rose, the Doctor, and Adam travel to the year 200,000. They land in a sort of space station that also happens to be a news station that's called Satellite 5. Rose has now assumed a sort of tour guide attitude toward Adam. The group has a look around the station, and here's where the trouble ensues. The Doctor notices that the station is using out-dated technology, and this gets his Scooby-Doo vibe going. Although I have to admit, this is an interesting way to get the news, I wouldn't want it for myself.

They make it (the news), package it, and send it. Any way, Adam faints first thing. Which is kinda crazy since he worked for that crazy dude in the last episode. You would think he would be used to the 'unusual'. Anyway, Adam takes off to get his sea legs.  So Rose and the Doctor work together to figure out what's going on in the station. They try to elicit the help of  the lady with the laser in her head, Cathica. However she does not want to get involved. She has sort of a 'don't want to get involved' attitude. We'll come back to that in a minute. First let's get back to Adam. While wandering around he stumbles upon a place where he can have information beamed directly into his brain. He'll never have to study again. Poor fool. So he get's the deluxe model:

I've never been more attracted to anyone in my life!

So Adam does the stupidest thing he can think of and calls his parents. Only they're not home, so he leaves a message on the machine. Yeah, you know this is going to come back and bite him in the tush. Meanwhile there is someone who is monitoring the station. We find out that it's Simon Pegg! Or um the Editor, as he likes to be called. Anywho, he apparently is working for someone else, who is pulling the strings.

While Rose and the Doctor are snooping around they happen upon the Editor in his layer, so to speak. The Rose and the Doctor plead ignorance and they almost get away with it except for-you guessed it-Adam. Yep, as soon as Adam gets his upgrade, he 'logs in' to the database. All the info stored in his head is downloaded to the satellite. And now the Editor has everything he needs. And we get to meet his boss, which is this sexy beast:

But just when you think it's all over, an unlikely hero steps up to the plate and decides to hit a home run! So the Doctor who is really pissed at Adam takes him home. Gives him a scolding. Adam pleads with the Doctor to take him back, but the Doctor tells him:

Burn baby, burn! You have been dismissed!

Life lesson: There are actually a couple. 1. Don't surgically install futuristic hardware on your body. Anywhere. It will only come back to bite you in the butt!
2. The media is run by an alien overlord who is trying to control the human population. Don't listen to anything they say.
3. Promotions are not always a good thing.