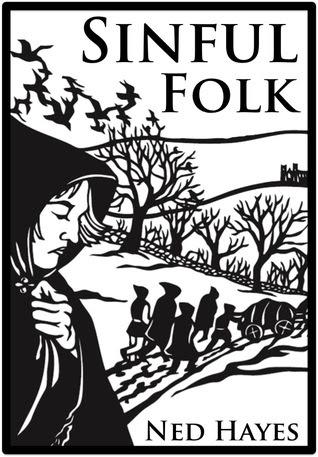 1) Please tell our readers about your journey into Sinful Folk.
One morning, during my long commute, I remembered a bit of history from the 14th century. Children died in a tragic house fire in a distant village. The families were in such agony that they took their dead children across England to the King’s throne to demand justice.

I could imagine their pain. The torture of losing your child. Their angry search for answers.

It is the first time I felt the truth of Alice Walker's idea that she is writing down the story of "ghosts" -- of real people who want their stories told in the present. I felt like I was hearing her in my own head: reading her own personal journal.

I heard Mear's voice so clearly and her story was so real to me, I needed to tell it.

SINFUL FOLK ultimately became her story -- a story of loss and tragedy that becomes Mear's very personal narrative of redemption and personal triumph.

2) Why do you prefer writing historical fiction?

All fiction is historical fiction in some manner, as you have to establish the history, back-story and grounded realities of your character's situation. When you're writing a fantasy novel, the challenge is actually harder, because you need to invent the complete world, and ensure it is a real-feeling construct and internally consistent.

I love historical fiction set in the real world, because I get to learn new and exciting bits of history. It was very interesting to me to learn a lot about the medieval era in writing this novel.

Here are a few small examples -- in the 14th century, the game Chess didn't exist as we know it today! And the idea of a toilet -- even an outhouse -- was a relatively new invention for English peasants. And finally, many women masqueraded as men for much of their lives. There was even a pope who was a disguised woman -- Pope Joan -- and this fact about womens' history gave me much inspiration for my novel.

3) What is your biggest challenge when writing historical fiction?

The hardest part of writing SINFUL FOLK is the fact that it is the story of a mute woman from the 14th century -- told from her perspective. However, I am a quite talkative 21st century man.
So for me, it took a great deal of work to ensure that I was being honest to Mear's perspective, her concerns, her sense of herself, her body and her time. I found it was quite challenging to find my way into her voice and her reality.


4) What inspired you to write Sinful Folk?

Originally, I was inspired by the mystery of the fire that killed the children. But as I wrote, the story rapidly became about one woman’s story. One mother loving her child. One tragedy. And her own relentless urge to find answers. I found the character of Mear, and her ability to be strong and courageous -- even in a very weak and subservient position -- to be very inspirational.

When I partnered with the wonderful NY Times bestselling author/illustrator Nikki McClure to put together the novel, her art inspired my revisions further -- her handcut black paper work inspired me to make the novel even stronger. You can find more about Nikki at http://SinfulFolk.com/illustrator/

5) Who was your favorite character?

I wrote SINFUL FOLK because I wanted to think deeply about children, mothers, families, and loyalty. How far would a mother go to protect her child’s memory?

6) What are you working on now?

GARDEN OF EARTHLY DELIGHT is my new work-in-progress. This is a historical novel set back in the Pacific Northwest... however, I have an idea that my main character in this novel may begin to learn about the Middle Ages, so I think I'll be writing some of the book from the perspective of a character in the 1400s. I am really drawn to that time period, and I keep finding ways to return to that era in my writing.

7) What is the last book you read?

I just finished Helene Wecker's marvelous new novel THE GOLEM AND THE JINNI (http://helenewecker.com). In her book, I like the way magical realism paints the real emotional reality of a situation, but keeps the characters grounded in historical reality. This technique is devilishly hard to pull off, but is quite rewarding when it works.

8) What is the most challenging thing about being a writer?

It is hard to keep writing each and every day: it is easier to just let it go and do something else that isn't as challenging or as mind-bending. Yet in his early book on the writing craft, Danse Macabre, Stephen King says that if you write just one page a day -- 300 words or so -- at the end of one year you'll have a novel.

And that has really helped to keep me going -- just add another 300 words today, and soon, you'll have a complete novel.


9) Which character gave you the most trouble?

I began writing the book from the perspective of my main villain -- I won't tell you his name, because that would give away a major plot point. But as I wrote the rest of the book, I found Mear pushing herself to the foreground, and I found it more and more difficult to find the voice and motivations of my main villain.

10) What is your favorite movie?

My partner Jill says I'm an honorary "girl," and I guess I show this through my movie choices. I love "Becoming Jane" (about Jane Austen's life) and I also love the movie "Chocolat" (based on the remarkable book by Joanne Harris) -- I really enjoy historical fiction that takes a (very slight) flight of fancy into magical realism. One of the movies that I find strikes this balance precisely is Terry Gilliam's very bizarre and interesting roller-coaster of a story -- "Brazil" -- which is another of my favorite movies.
11) Where can readers find out more about your work?

You can also follow join about 20,000 people and follow me on Twitter at http://www.twitter.com/nedwriting, or Booklikeshttp://ned.booklikes.com. A fan-generated set of photos based on the novel already exists on Pinterest... you can contribute at http://pinterest.com/nedhayes/book-quotes-new-novel-sinful-folk/