What made you decide to continue the adventures of Huck Finn and Tom Sawyer?

I had written two books previously, a historical novel (164,000 words), and a book of short stories (185,000 words). When I was trying to find and agent for either one of them, I was repeatedly told that they were two long for a first time author. After a year of trying, I got mad and said, “I can write 80,000 words if that is what you guys want.”

I had just finished reading HUCKLEBERRY FINN, so I sat down at the computer and banged out REDEMPTION in two months. It only took that long because I was still writing short stories and my computer died. It took me two weeks to get it fixed. I was angry! The story is, that within a month of finishing, I had one of the biggest agencies in the country in love with the book.

In Redemption, Huck and Tom are all grown up. How have their lives changed since they were kids?

When they were kids Tom was more in charge of things. But now Huck leads. They understand now that the world is a bigger place then they ever imagined when they were kids. They’ve met many different kinds of people and they now know that a man (or woman) is not to be judged by the color of his skin. I think that is the most important change about them.

What do you think is so appealing about Tom and Huck?

I did not make them appealing, Sam Clemens did. My Huck and Tom are completely different. Because adults are different then the children they once were. Huck and Tom grow up fast in my novel.

What do you think Mark Twain would think about Redemption?

I think Sam stood over my shoulder as I wrote. I think he was the instrument. It’s something he wanted said. When I finished writing, I barely remembered what I wrote. However, of course, after seven months of editing, I know most of it by heart now.

Have you ever considered growing a big, bushy mustache like Mark Twain? 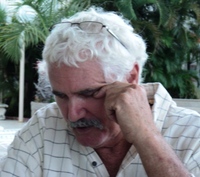 I have a mustache, just not as bushy. But I’m working on it.

Please, tell me a little bit about your canine companion Danny. Is he supportive of your writing?

Danny writes his own blog. He has almost forty stories to his credit. So no, he is not supportive; we fight for the computer all the time. (I included one of his stories below.)

What book (other than yours) would you like to write about?

That is a hard question to answer. May I get back to you on that?

If this book were made into a movie, who would you want to play Huck and Finn?

It’s funny you should ask that. My agent is negotiating with a producer to make it into a movie. But to answer your question: Matthew McConaughey as Huck and Leonardo DiCaprio as Tom. (In my book, Huck is the leader.)

Halloween is just around the corner. Have you ever had a 'paranormal' experience?

Yes. But it will take a little telling. (If you don’t have the space, you can edit this answer) Here goes: Many years ago, I was hitchhiking through Kansas and was let out in the middle of nowhere. There was nothing but prairie before me. I was 21 and healthy. I shrugged and started walking. It was the first thing in the morning. I was well rested and had just eaten breakfast. Within a few minutes, I stared to slow down. With every step, I found it harder to raise my foot for the next step. Within minutes, I could no longer move. I had no energy, none whatsoever. It was only with the greatest willpower that I did not collapse.

But within seconds, a car stopped and through the opened window the man offered me a ride. I somehow got the door opened and fell into the car. As we left that spot, my energy came back. With every inch we traveled I came back to normal. Then I forgot about the whole thing until 22 years later. That’s when I had the dream.

I was standing behind a covered wagon. I was dying. My family, at the front of the wagon, was already dead. We had been stranded on the prairie, why or how I don’t know. But we were dying of starvation. When you have no food, you have no energy. It was 1848. And in the dream, I came to realize that the place that I died in 1848 was the exact same spot where I lost all my energy in 1968 and could not move an inch. A true story. There are energy vortexes that do not dissipate.

What are you working on next?

Editing my two previous books because now I hope to sell them. The one thing that REDEMPTION has taught me. You can never edit enough. Oh, and I will be helping Danny get his book out there … THE DANNY CHRONICLES: Stories from Danny the Dog’s Blog.

Thank you very much for the invitation to talk,

As promised here is one of Danny’s blogs.

Hello all you dog lovers out there. It's me again, Danny the Dog. Today I want to tell you about Heather, she's my girlfriend. She lives on a sailboat a couple of slips down from my boat. Well, Andrew’s boat and mine. You remember him, he my hapless human.
First of all, I bet you all think Heather is a dog. Well she's not, she a human. I know, no one is perfect, except maybe me. But human or not, I think Heather is cool. We first met a few months ago when she brought her sailboat to the marina for repairs.
The first time I saw Heather, I was outside on the dock catching a few rays. I like to soak up a little sun in the wintertime, when it’s cool, to lighten my fur. I think it makes me look more attractive. Anyway, she came off her boat and scratched me behind the ear. It was love at first scratch.
I’m sure she feels the same way about me because she is always giving me “cookies” as she calls them. They’re really just dog biscuits, but what the hell. A few years ago, Andrew brought some home and I wouldn’t eat one of them. He eventually ended up throwing them out. But somehow, from Heather’s hand they are oh so sweet. She also gave me a water bowl.
Nowadays when I take Andrew for a walk, I run right up to Heather’s boat with my tail a waggin’ and I won’t move until she comes out and pats me on the head. Andrew doesn’t like the delay to his walk, but he’s well trained and he stands there until I’m ready to go.
But I’m sad as I write these words. You see Heather is leaving me. Her boat is repaired and she will be setting sail for the Islands in about a week. I would like to go with her, and she has offered to take me, but I can’t leave Andrew. He would be lost without me. He can’t even find his shoes in the morning without my help. And who would write his books for him? No. I can’t go away with Heather. I will miss her. And out of memory of her, I swear I will never eat another dog biscuit once she is gone.