The Birthplace of The Angel Connection by Judith Barton

By Marcie - October 14, 2013
The Birthplace of The Angel Connection
by Judith Anne Barton

Did you ever cross the threshold into an unfamiliar house and have it grab you by the roots of your hair and not let go? It happened to me when I first set foot in the cottage in Bucks County, Pennsylvania that would soon become my home. Little did I know that my novel The Angel Connection was gestating within those walls, and that I would give birth to it.

I’m not sure why the idea of moving to that historic area took seed in my mind. True, my brief second marriage was over and I needed a place to live. My kids were three thousand miles away, my career as I’d known it was stalled and the suburban roads I’d driven for thirty years were a sad metaphor for the rut of my life.

It was time for a change.

As a television journalist, I’d reported many stories from the bucolic towns and villages of Bucks County that nestled on the banks of the mighty Delaware River one hour north of Philadelphia. I’d spent idyllic weekends puttering in flea markets and antique shops, dining in historic inns, nestling into featherbeds in quaint bed and breakfasts. I loved the natural beauty of the area, the deeply rooted history that shaped early America. This was William Penn’s land; this was the home of the Leni Lenape tribe. This was where Washington crossed the Delaware. This was where Oscar Hammerstein wrote his musicals; this was where Dorothy Parker set her witty pen to paper, and this was the birthplace of the Pennsylvania Impressionist movement.

One Sunday my soon-to-be-ex and I set out to scour the area for a house for me to buy. As we drove down a winding country road, he told me about a delightful cottage in a tiny village nearby that a friend of his had once lived in. He said it would probably be impossible to find, but we finally meandered our way into a sweet patch of Town Square no bigger than a parking lot. There was an inn and a general store and a teeny post office. About a mile outside the village, my husband slowed the car to point out a charming cottage nestled by the side of the road. He told me it was the house where his friend had once lived. We drove on.

A week later I returned to Bucks County with a realtor, who had a list of houses to show me. I insisted on a pool to swim my laps, and-- need it be uttered--a dishwasher.

We wandered through a few houses complete with pool and dishwasher, but they left me unmoved. At lunch the realtor told me she was trying to get the key to a “historic gem” that was not even officially on the market. Later that afternoon, having tracked down the elusive key, she drove me down a country road, while I kept an eye out for the street address. Suddenly I spotted it, and we turned into the little driveway.

It was the house my husband had shown me a week earlier. And on this very day, it had come up for sale.

I approached the house with a sense of wonder. Once inside I was enchanted by the beamed ceilings, random width floors and cozy river stone fireplace. The kitchen window looked out over a vast back yard sloping down to a creek and beyond that, a wooded ridge. There was a large oak tree and an enormous weeping willow.

Then I noticed on the refrigerator an engraved invitation to a musicale. The name of the pianist was Barton--my name. I gulped.

Upstairs there was more charm and another bizarre coincidence. On the wall was a large framed poster from the Marmottan Museum in Paris, I’d stood in that off-the-beaten-track museum not three weeks before, galvanized by the visual feast of Claude Monet’s own palette. Now, my pulsing blood suddenly felt carbonated, my head ached. I grew dizzy. What was this house telling me? There was no pool, no dishwasher, and the only bathroom was downstairs, a long walk from the bedroom in the middle of the night. And yet…

Well, as I said, I didn’t buy the house, the house bought me.

A few months after settling in, I researched the deeds to the house, going back 148 years and learned that in 1913 a family named Barton had lived there. I tracked down their family grave site in the old cemetery in nearby Point Pleasant.

In the years that followed I used to say that walking into my sweet house was like walking into a hug. Within that hug The Angel Connection was born.

Judith Anne Barton is an author, actress, playwright and award-winning television journalist. The Angel Connection is her first novel. After a successful career in broadcast journalism in Philadelphia that spanned over a decade, Barton moved to Bucks County, PA where she worked with her mentor, the late JP Miller, author of the classic The Days of Wine and Roses. Her first play Opening Night received its world premiere at Philadelphia’s Lantern Theatre Company, and was named a finalist in the Sundance Film Lab competition. She is the co-author of The Best Letter Book Ever and is also a published poet. Barton now resides in Los Angeles where she also pursues an acting career in film and television. Her sons, William Wheeler (The Reluctant Fundamentalist) and Thomas Wheeler (Puss in Boots, Puss in Boots II) are successful screenwriters. http://judithannebarton.blogspot.com/ 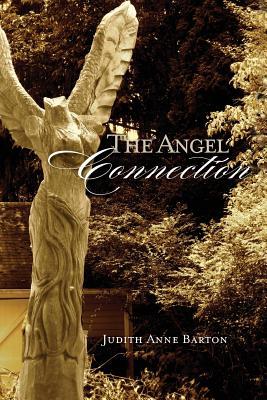 In 1996, after her reputation, marriage, career as a TV journalist and relationship with her adult son, Chad, are trashed, Morgan Reed starts over in Milltown, Pa., a village in beautiful Bucks County. She feels drawn there, particularly to the 200-year-old former rectory that she buys. In 1895, Evangeline Laury, minister’s wife and mother to a small boy, feels stifled in provincial Milltown. She misses the cultured life she’d led in Philadelphia and her painting, especially when she learns that a local American impressionist, the charismatic Daniel Duvall, is giving lessons. As Morgan, with the help of her handsome but mercurial neighbor Victor, works on a documentary about 1895 Milltown, she uncovers more spooky parallels between her life and Evangeline’s. Both women, desperate for love and connection, are guiltily caught between competing attractions and responsibilities, whether for a husband, lover, child or work, and both women will experience the tragic death of someone close. In her debut novel, Barton writes lush descriptions of beauty and desire, with interesting historical details, many of which seem borrowed from real-life American impressionist painter Daniel Garber and his Bucks County studio at Cuttalossa Farm. (Black-and-white historical photos in the book go uncredited.) Though the narrative works to account for Morgan’s needy self-pity and Evangeline’s blind desire, readers might feel less sympathy than the writer intends, especially since other characters pay the ultimate price for the women’s culpability. In particular, deeply emotional Evangeline’s self-punishing guilt becomes internal melodrama. When Victor very reasonably objects to involving sullen, hard-drinking Chad on the documentary project, it’s a welcome moment of sensibleness: “It is not my problem to save your son.”