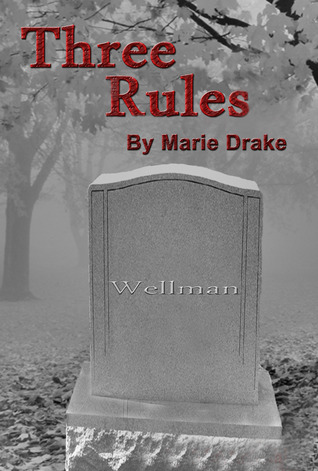 Hope Wellman has a childhood full of horrific memories, a bone chilling recurring nightmare, and a persistent paranoid sense of being followed that she would rather keep repressed. Is evil reaching from beyond the grave to capture the tattered remnants of her soul once and for all, is it only a machination of her disturbed mind, or is there something happening more sinister than even she can imagine?
Attending the funeral of her abuser is the first step in putting her life back together. She struggles with the fact she never told anyone what happened to her, and that the grave they are mourning over is empty. She'd find it a lot easier to move on and believe in the future if he were in the box, ready to be covered with dirt. She fears the last thread of her sanity has snapped when she sees Lucas everywhere she turns, and can't escape a recurring nightmare. Is her tormentor alive, or is she imagining it? Is her dream triggered by past fears or is it a prediction of the future?

Quoted from Three Rules:
“I have learned three rules in my life: 1.) The most dangerous people in the world are not always strangers. 2.) The scariest things imaginable are not those that can kill you, but those you can live through. And probably the most prominent: 3.) The most horrible possibility is not what could happen to you, but what you could become – I became a killer.”
~Hope Wellman

I want to spit on his grave, but I won't. That would cause the surrounding people to be offended and confused, all these people who didn't truly know him but honor him at this service. I hold my frame as stiff as a board beneath the dark, rumbling sky full of churning clouds – the perfect weather to send him off. I twist my buttons trying to make sure they all point in the same direction. It's a trivial thing to be focused on at a grave site, but my obsessiveness won't allow me to stop until I fix them all.
I guess most people would be sad attending two family members' funerals so close together. I'm not. We buried Grandfather Leonard not long ago. I didn't cry. I didn't know him. I didn't know what I was missing by not knowing him. I don't have any grandparents on my mother's side either. I wasn't his real grandchild anyway – and he never fussed over his own children – so why would he fuss over their children? I'm wearing the same black dress. My black hat covers my long blonde hair, fashioned into a bun. A veil conceals my face. I'm not crying for the loss of this man either, but no one can tell. Another rumble of thunder sounds and lightning crackles through the clouds. It seems appropriate that the sky swell up and spit on him for me. The pearly gates will not open to welcome him. No, he will not spend a single moment of eternity in a peaceful state.
There is no open casket, no public viewing. The authorities recovered his boat with evidence of some blood, a few strands of hair, and empty alcohol bottles. It was a logical conclusion that he fell, bumped his head, and went into the water. They did not recover his body. Too bad, I may find some morbid sense of satisfaction seeing him laying there in a coffin dead.
This ceremony over an empty grave seems very strange. Among all these tearful people mourning and sharing embraces, I separate myself. I look at them. I can see the fear in some of their faces. He died very young. They're afraid of death.
I scan the cemetery. So many headstones, so many graves, they all contain secrets – even the empty ones. I stand alone, twisting these buttons, counting the reasons I'm glad he's dead.

Marie Drake lives with her husband and their four wonderful sons in a small town near Lake Ontario. They take advantage of what others deem a vacation spot all year long. Camping and hiking are some of their favorite family activities. They also enjoy volunteering at the local animal shelter together, and recently rescued a Jack Russell/Corgi mix who made their family complete.
Marie is a crochet fanatic. She designs her own patterns and enjoys crocheting for friends, family, and charity. She loves to cook and bake, especially when making up a new recipe. Marie is an avid reader of romance, mystery, and suspense thrillers.
She is a woman of many interests - and maybe talents - but will be quick to tell you that her most important and proudest accomplishment is the part she played in the lives of children. She provided daycare for over ten years, and she and her husband fostered more than fifteen children over a five year period.
While juggling all her boys' sporting events, academic, musical, and other extra curricular activities, and running a small home based business designing crochet afghan patterns, Marie tries to squeeze in some time for writing each day.