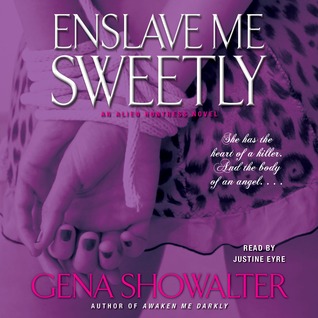 
Goodreads Summary:
Eden Black walks among humans, protecting them from the murderous evil of other-worlders who abduct and enslave. And though she appears to be human herself, Eden is an alien, a Raka, distinguished by her golden hair and skin, and gifted with the ominous ability to kill without remorse -- and with total accuracy. That is, until the fateful night she has one shot to eliminate her target, a human slaver -- and misses."Failure" is not in Eden's vocabulary. Neither is "partner" -- but that's what she is forcibly assigned after recovering from her disastrous mission. A sexy, steely-nerved human agent, Lucius Adaire enjoys nothing more than sparking the fury -- and rousing the desire -- of the fiery female assassin too proud to admit defeat. Locked in an assignment they cannot afford to lose, Lucius and Eden find themselves bound in two high-stakes, heart-pounding games: the sensual web of kill or be killed, and the erotic dance of seduction.

My thoughts on the audio:
Enslave Me Sweetly is narrated by Justine Eyre. Justine also narrated, Awaken Me Darkly, the first book in the Alien Huntress series. She has a raspy-just-woke-up-I-have-a-scratchy-throat type of voice. She does a decent job with the reading. I'm not in love with her voice and at times I find it slightly annoying, but overall I think she does a good job.

My thoughts on the story:
Eden Black is the alien huntress in this book. She's also an alien herself. Eden is a Raka, which is an extremely beautiful alien with skin and hair like gold. Her race his highly coveted. In Enslave Me Sweetly, Eden is working undercover to bust a human slave trade operation. She is paired with Lucius Adaire, a ball-busting human. They have a love-hate relationship from the get-go.

Eden and Lucius definitely have chemistry. They like each other from their first meet-up, but to cover up their attraction they sort of take the kindergarten mentality of 'I like you, so I'm going to be mean to you.' So they banter and flirt until they can't deny their attraction any more. Being with Lucius helps Eden uncover some of her alien abilities that she doesn't even know about.

The story line is good. Eden goes undercover and plays helpless. And, of course, whatever can go wrong, does go wrong. Which makes the story a little predictable, but still enjoyable. To me this Enslave Me Sweetly is better than the first book, Awaken Me Darkly. I felt like the story line was tighter in this book. Gena Showalter has a way of writing steamy relationships with an exciting story line that makes all her books a joy to read. Although I'm enjoying this series, Lords of the Underworld is still my favorite.