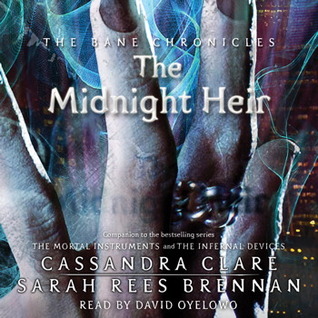 In Edwardian London, Magnus Bane discovers old friends and new enemies…including the son of his former comrade Will Herondale. One of ten adventures in The Bane Chronicles.Magnus thought he would never return to London, but he is lured by a handsome offer from Tatiana Blackthorn, whose plans—involving her beautiful young ward—are far more sinister than Magnus even suspects. In London at the turn of the century, Magnus finds old friends, and meets a very surprising young man...the sixteen-year-old James Herondale.

“...there was no spell to cure a broken heart that did not also destroy that heart's capacity for love forever.”

For fans of The Infernal Devices they will know the characters in this particular story very well. I, alas, have yet to read them so my impression is that of an outsider looking in. You can tell from the tone that there is a lot of history between the characters and some of it is very sad. However there is also a bond that can't be denied. In this book, Magnus meets up with Tatiana Blackthorn, who is a bit of a mystery. She's also had some issues in the past. She sends for Magnus to do her sinister bidding.

Thus far I have enjoyed The Bane Chronicles, but before now I didn't feel the need to read The Infernal Devices before diving into these. However this book changed all that. Now I wished I had. For if I did, the encounter with Magnus's old friends would have made more sense. However Clare did a great job of setting the mood for the scene. I'm really enjoying these books, and getting to 'know' Magnus more and more.

The narrator is David Oyelowo. He did an excellent job. He has a pleasant voice that I could listen to all day. I really hope he considers narrating more books.

Other books in this series:
What Really Happened in Peru
The Runaway Queen
Vampire, Scones, and Edmond Herondale