Goodreads Summary:
What? A princess??

Mia Thermopolis is pretty sure there's nothing worse than being a five-foot-nine, flat-chested freshman, who also happens to be flunking Algebra.

Is she ever in for a surprise.

First Mom announces that she's dating Mia's Algebra teacher. Then Dad has to go and reveal that he is the crown prince of Genovia. And guess who still doesn't have a date for the Cultural Diversity Dance?

My thoughts:
I've watched The Princess Diaries movie more times than I can count. I think it's an adorable movie, and my daughter and I love it. My daughter wanted to read the books as well, but first I wanted to check it out to make sure if was suitable for a nine-year-old. Because we all know that books to movies are rarely the same.

I did like the book. True to it's title, it is in the form of a diary. I enjoyed getting Mia's thoughts on what was happening in her life. It was very entertaining and humorous. And I think girls around the age of thirteen would really enjoy it. However I think my girl is still a little too young. There's nothing really too bad about it, it just has some older themes to it, such as kissing and drinking. A little heavy for my daughter right now.

Also this book is different from the movie. For starters. Where's Joe? I like Joe. I was disappointed he wasn't in the book.

Also Mia had blondish hair in the book, whereas in the movie she's a brunette. But I love Anne Hathoway, so they're forgiven. 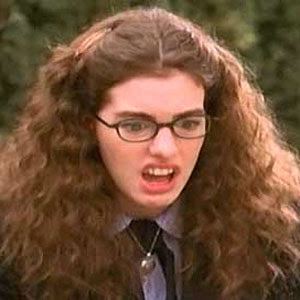 And for the biggest difference of all: In the movie Mia's dad is dead. In this book, he's very much alive and in her life. I have no idea why they left him out of the movie.

I still love the movie and book, but separately. The movie is an okay adaptation of the book. I love the casting in the movie and the story line is basically the same: girl finds out she's the princess and has a hard time with it. I think the movie is suitable for most audiences, while the book I would be suited more toward the preteen-teen age girls or boys.
book into movie Meg Cabot review The Princess Diaries