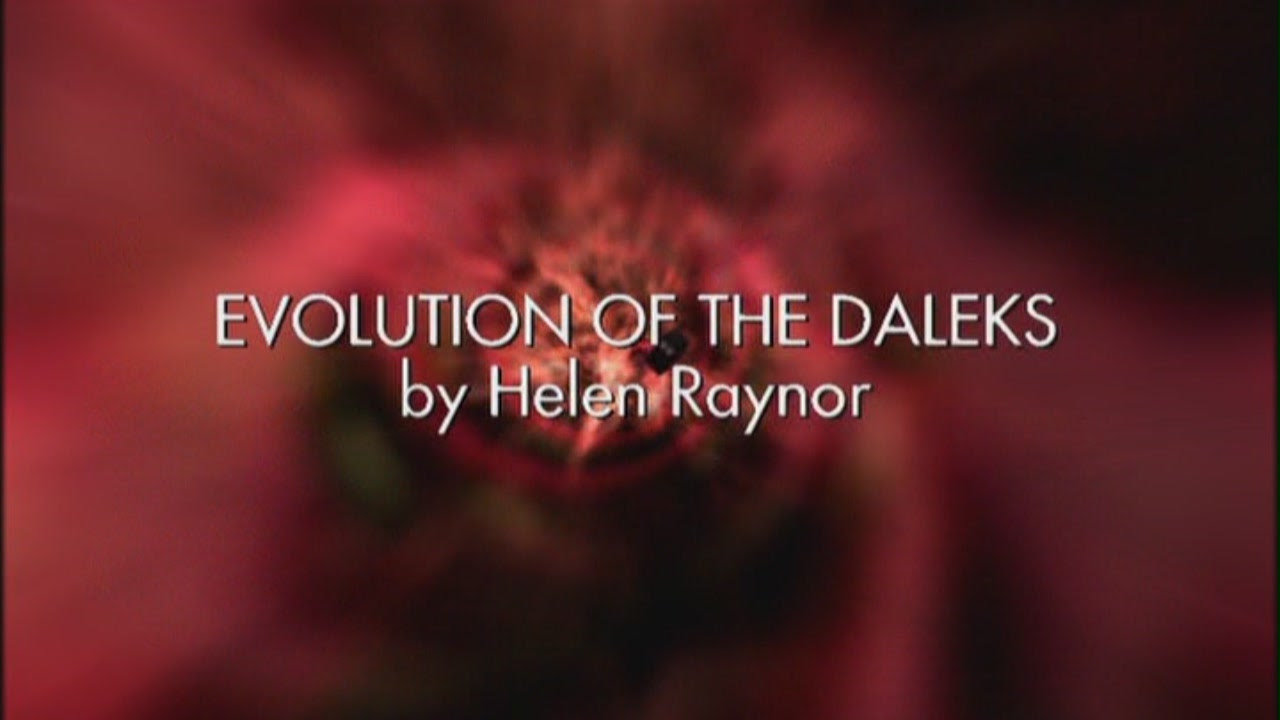 Title: Evolution of the Daleks
Written by: Helen Raynor
Directed by James Strong
Original Air Date: April 28, 2007
We left off last week with a huge cliffhanger. We've learned of the Dalek's master plan to take over the world. However this news is hardly shocking. Especially since they're always trying to take over the world. It would be more shocking if the Daleks just came by for a friendly chat and a cup of tea. Anyway, this time they're into genetics splicing. They're combining human and Dalek DNA. If you're wondering what that would look like, check out this beastie: 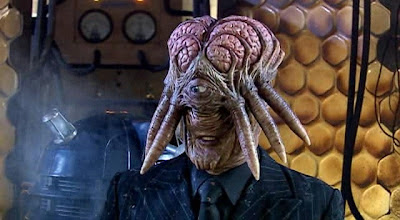 But hey, he's wearing a nice suit. Even Dalek's can look sharp in a good suit. So the Dalek's have been kidnapping New Yorkers and turning them into pigmen. Only they're not suppose to be pigmen. Although it's weird if you think about it. A Dalek looks more like this guys head and humans, well, we look like humans. Where do the pigs fit into all of this? 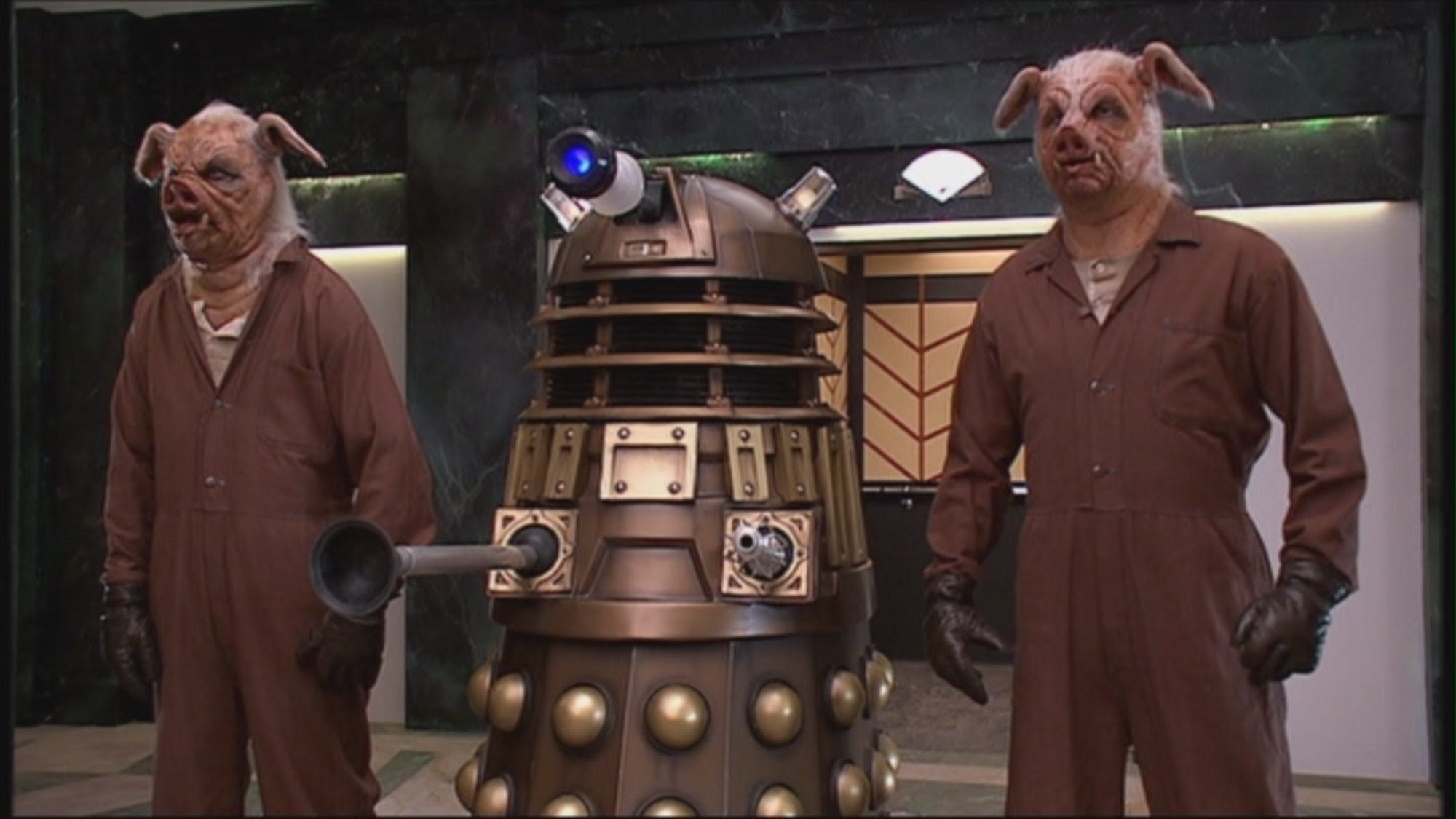 Okay back to the plot. The thing that throws a wrench into their plans is that Dalek Sec is starting to feel compassion towards the humans and decides to deviate from their original plan. Isn't that just like us humans? Throwing feelings into the mix? Anyway the rest of the Dalek crew isn't happy about this plan, so they vote him off the island. Dalek Sec, you are the weakest link. Goodbye. 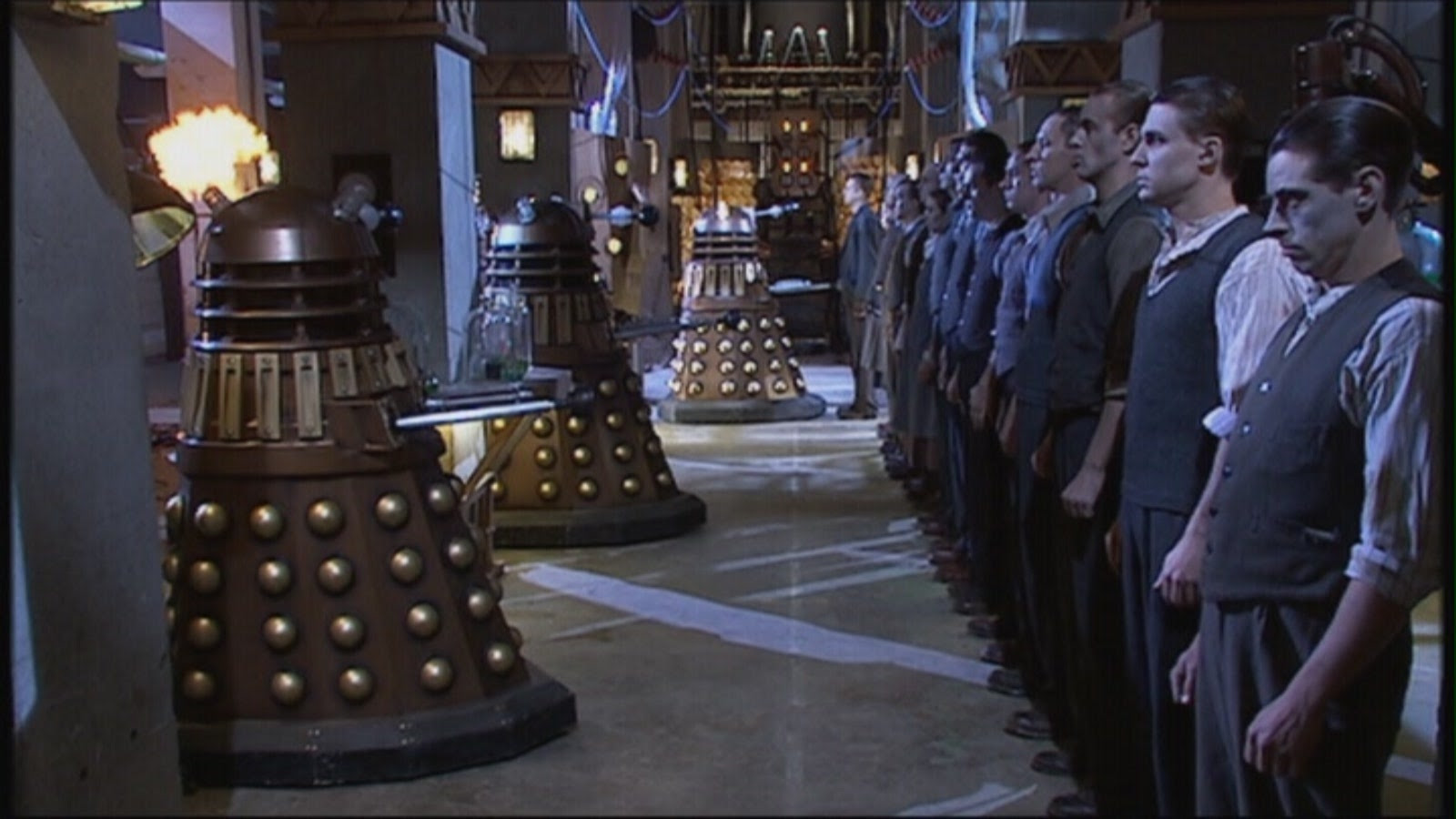 So Martha, Tallulah, and Laszlo, have to save the empire state building from the Daleks. The Doctor originally wanted to help the Daleks. After all, he knows what it's like to be the last of his kind. But after they betray Dalek Sec, he decides they need to go. So a big fight ensues and one of the Daleks escape. But it doesn't end in tragedy because at least the Doctor can save Laszlo. So all's well that ends well.

Life lesson: Seriously, stop with the messing around with DNA. Here lies another case of people messing with stuff they have no business messing with. Although in this case the guy just wants to rewind the years back and be youthful again. And really who can blame him. He's like 100 years old at the beginning of the episode.

He builds a machine and he becomes this: 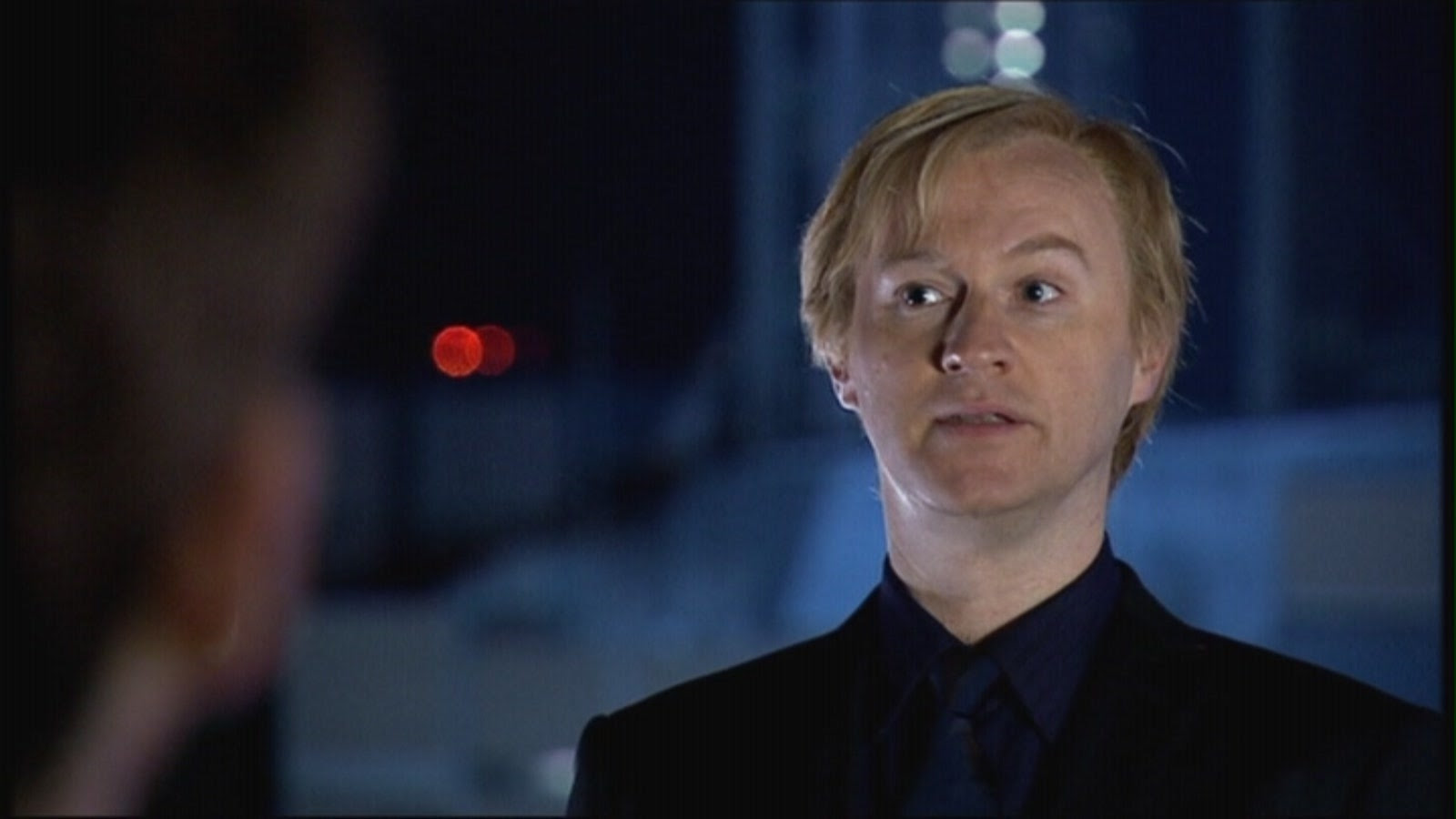 Oh, and I forgot to mention Martha's sister works for this guy. So her whole family is at the presentation of this 'fountain of youth' and Martha's mom does not like the Doctor. He doesn't do well with parents, does he.

Anyway everyone is all like 'ooooo' and 'ahhhhh', but then this happens: 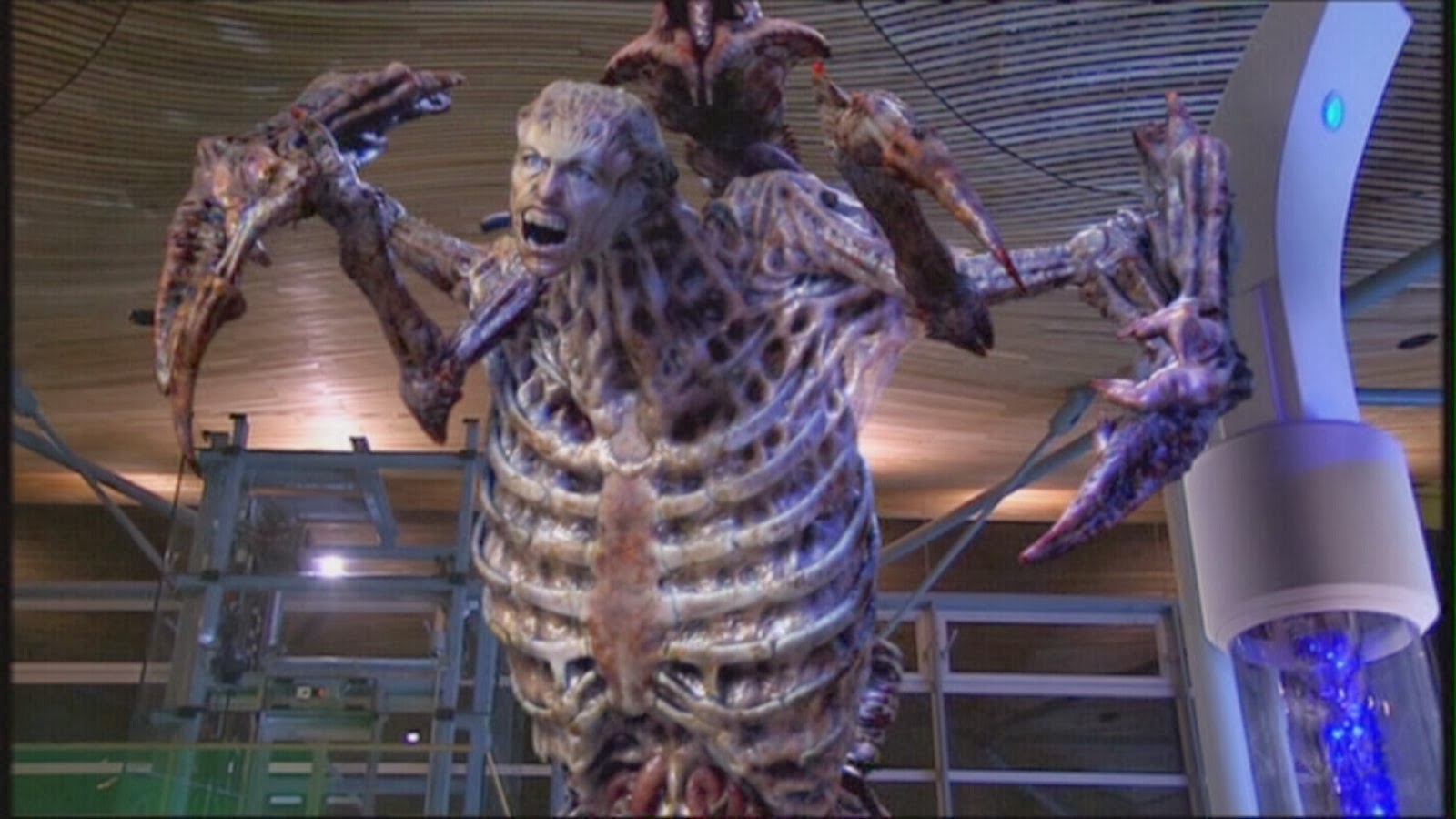 So clearly there's a problem with the machine. So everyone is running around trying to escape. Martha gets her family out, but then goes back in to help the Doctor. This does not please her mother. But Martha is totally infatuated with the Doctor, so she doesn't care. So they finally think they defeat the bug, but then they realize they didn't. Martha's sister joins in to go finish him off. I kinda felt sorry for the man-bug-thing. And though I wouldn't want to live forever, living an additional 50-75 years wouldn't be bad. Any way, this whole episode Martha has sort of an attitude with the Doctor. But at the end you finally realize what's going on. And by you, I mean the Doctor. Martha doesn't want to just be a fly-by-night companion, she wants the whole companion package. And of course he agrees because he likes Martha. He just doesn't like-like her. Did I just revert back to the third grade. Yes. Yes I did.

Life Lesson: Growing old can suck, but it's better than becoming a man-eating bug.