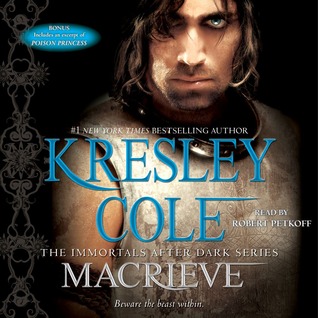 Goodreads Summary:
A Beast In Torment

Uilleam MacRieve believed he’d laid to rest the ghosts of his boyhood. But when a brutal torture revives those ancient agonies and destroys his Lykae instinct, the proud Scot craves the oblivion of death. Until he finds her—a young human so full of spirit and courage that she pulls him back from the brink.

A Beauty In Chains

Seized for the auction block, Chloe Todd is forced to enter a terrifying new world of monsters and lore as a bound slave. When offered up to creatures of the dark, she fears she won’t last the night. Until she’s claimed by him—a tormented immortal with heartbreaking eyes, whose touch sets her blood on fire.

A Full Moon On The Rise

With enemies circling, MacRieve spirits Chloe away to the isolated Highland keep of his youth. But once he takes her to his bed, his sensual mate becomes something more than human, evoking his savage past and testing his sanity. On the cusp of the full moon, can he conquer his worst nightmare to save Chloe . . . from himself?

My thoughts on audio:
Robert Petkoff has narrated several of the Immortals After Dark Series and I don't think I've given him enough credit. I've liked the work he's done in the past, but it occurred to me while I was listening to this, how versatile he is in giving each character his/her own identity. If you're a fan of this series, you know how many characters there are. So this is no small feat. I think Petkoff is a fantastic reader! They could not have gotten anyone better to narrate this series.

My thoughts on the book:
So I have a thing for Scottish accents. And the main character happens to have one. Score one for team MacRieve. Though I have to say, his accent was the only thing that saved him a couple of times in this book for me.

MacRieve had a traumatic experience as a child. He was in the snare of a succubus when he was just a child. That part was hard to listen to. Anytime a child is abused in a story, it's hard to read. MacRieve is haunted by events in the past. He tries to deal with it the best he can. Even his twin doesn't know how to help him. That is until he meets his fated bride.

Chloe is the most wanted of the lore. Her father had done unspeakable crimes against their kind, and they're looking to make him pay. They can't seem to find him, so they take his daughter instead. It's here that she meets MacRieve. They have an instant attraction, and Chloe is pretty cool about most everything. Then the unthinkable happens . . . she finds out she's a member of the lore . . . and a succubus to boot. This is when everything comes crashing down around her.

This is also when MacRieve turns into the biggest a**hole ever. Seriously, I don't know how Chloe didn't just end up punching him in the throat. I know why MacRieve was acting the way he was, but that didn't excuse his behavior. Chloe and MacRieve had a long road to travel to find peace with each other.

This wasn't my favorite IAD book. I hope Kresley Cole has many scenes in her upcoming books where MacRieve is still trying to make amends with Chloe. It has some tough issues to deal with, so people sensitive to them, probably shouldn't read this book. Also there is some major douchbagory. People sensitive to that issue, probably shouldn't read this book either. But for the rest of us, this book will do until we can get our next Immortals After Dark fix.