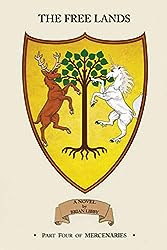 
About the book:
Despite sturdy pioneers, rich resources, fertile plains, and excellent prospects, the frontier province of the New Empire, increasingly plagued by banditry, separatism, and the old threat of the northern barbarians, may need some professional assistance to survive and prosper. The first three volumes of the Mercenaries series are a trilogy not only because of their number but because the story is a continuous tale. This book, Part Four, is a stand-alone volume. Events occur in a region barely mentioned in the trilogy and the story is complete. Many characters are new; many old characters are not present.

My Thoughts:
I recently had the privilege of reading and now of reviewing the fourth book of the Mercenaries series, The Free Lands by Brian Libby. I have read and reviewed the first three books and loved them. This book picks up a relatively short time after Resolution ends. As it is described above, this is a stand alone story. The previous three books were all part of a continuing story which concluded in Resolution. This story takes the Pelicans to the Free Lands, a new frontier for the Empire and mostly untouched in the books until now. The Pelicans are sent there to help deal with rampant banditry and to restore order and to insure the safety of the populace. While in the Free Lands, they uncover a much larger problem and are forced into a full out war for the very existence of the Free Lands. That’s all I want to say about the plot for fear of giving to much away.

The main characters of Andiriel, Lana, Dagget and of course the Sand Fox, Sandi are all back as well as the Pelican’s senior officers and a few other characters from the previous books. Most notably are Timos Feld, former vice-commander of the Sons of Bartin regiment (from Resolution), Sir Stefan, Sir Branlor’s former squire and Col. Tyvar Negrath, commander of the Black Lions Light Horse Regiment (from Resolution). Of the new characters the most prevalent is Saril Trell, the viceroy’s chief Privy Councilor. He is a lawyer but when the Free Lands needs him, he steps up his game and becomes the colonel-general to direct the forces against the bandits. All the characters that you get to know in this story are well written and developed. Libby does an excellent job of using the characters to get you invested in the story. Andiriel and her fervor for doing right, for the Empire and for her regiment are inspiring. There is deep emotion conveyed by the characters that makes you feel a part of the Free Lands.

Now, as to that story. This continues to be some of my favorite stuff that I’ve read in quite some time. The politics, the culture, the overall world-building that Libby does here is outstanding. The battles are once again told in exquisite detail and brought to a life of their own. The dense forests remind you that we are on the new frontier as far as the Empire is concerned. This is epic fantasy storytelling at its best.

I have truly enjoyed the Mercenaries series and sincerely hope that the author gives us more of Andiriel, Sandi and the Pelicans. I feel the need to quote my review of Storm Approaching again; “If you are looking for a good fantasy story without all the trappings of convenience found in most contemporary fantasy then this is a book you NEED to read.” Although this is a stand alone book, you would be doing yourself a disservice if you skipped the first three excellent books in this series. This is an absolute must for you fantasy lovers TBR stack.