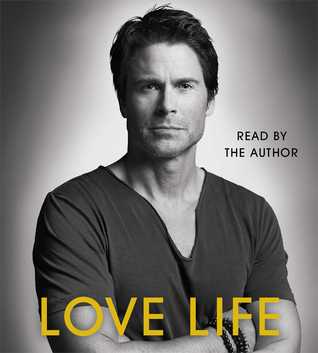 
Goodreads Summary:
When Rob Lowe's first book was published in 2011, he received the kind of rapturous reviews that writers dream of and rocketed to the top of the bestseller list. Now, in Love Life, he expands his scope, using stories and observations from his life in a poignant and humorous series of true tales about men and women, art and commerce, fathers and sons, addiction and recovery, and sex and love.
My thoughts on the audio:
Love Life is read by the author, Rob Lowe. I always love it when authors read their own books. They add perspective that only an author can give. They know all the emotions and feelings that the characters are going to give. This book however is not a work of fiction, but a memoir, so hearing Rob Lowe read his own book is like sitting down with him while he tells you some of the best and worst times of his life. In the beginning, it took me a while to get used to his voice. There is nothing wrong with it, but it was the first time I listened to him when he's not playing a character. It was odd at first and took a bit to warm up to what I guess is the real Rob Lowe.

My thoughts on the book:
By the title of the book you might assume that this book is full of dirty details of Rob Lowe's 'love life'. However it's not until you crack open the book when you realize that while it is a book about his love life, it's not dirty. Rob Lowe has a lot of loves in his life: his career, his family, his friends, and his wife. In this book he talks about them all. From his early days in Hollywood, to sending his son off to college.

There are moments in this book that I felt that Rob was being real, completely vulnerable and laying his cards on the table for all to see. He has some amazing stories to tell, and he does some great impressions of his friends. There are other times when I did question how 'real' he was being. Whether he intentionally vamped up a story to make it more interesting. Despite all that this was a great audio book to listen to. I can imagine that it is hard to open up the highs and lows of your life for scrutiny, and I appreciate his willingness to do so. He definitely has some amusing tales to tell. More than that, he has some heartwarming tales to tell. Especially about sending his first born off to college.

I'm very picky about the memoirs I listen to, and I'm so glad I chose this one. I did mainly because St. Elmo's Fire was and still is one of my favorite movies. Every time I watch that movie, it transports me back to the first time I watched it many years ago. So few movies do that to me. It was also my first introduction to Rob Lowe. Love Life gave me the chance to learn more about the actor behind the movie.