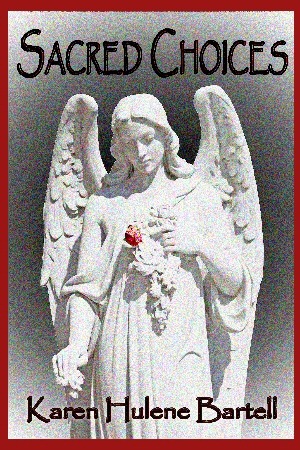 An inspirational love story centered on self-growth, Sacred Choices weaves together the lives of three resilient women. Ceren is a newly-married and pregnant professor who learns her husband is a bigamist who urges abortion. Judith, Ceren's colleague - an older, worldlier professor and pro-choice advocate - provides counsel based on her experiences. Judith's sister Pastora, a nun, provides the voice of reason. Written for, by, and about women who have had or are considering abortions, Sacred Choices is Ceren's journey - from her positive pregnancy test, through her decision whether or not to have an abortion - to an uncanny conclusion. Sacred Choices has an offbeat charm steeped in the supernatural. The protagonists' search for the answer to whether it is the Aztec goddess Tonantzin or Our Lady of Guadalupe who has been revered for the past 500 years is interrupted by a giggling, young girl, who appears only to Judith. Is she a figment of Judith's imagination, a vision - or could she be an angel, as Pastora believes? Set near Mexico City and incorporating present-day Hispanic and ancient Aztec beliefs, culture, and cuisine, Sacred Choices deeply celebrates the triumph of the spirit.

Born to rolling-stone parents who moved annually, Dr. Karen Hulene Bartell found her earliest playmates as fictional friends in books. Paperbacks became her portable pals. Ghost stories kept her up at night—reading feverishly. The paranormal was her passion. Wanderlust inherent, she enjoyed traveling, although loathed changing schools. Novels offered an imaginative escape. An only child, she began writing her first novel at the age of nine, learning the joy of creating her own happy endings.
Karen Hulene Bartell resides in the Texas Hill Country with her husband Peter and her ‘mews’—five rescued cats.

Alighting in Mexico City, she understood the reason for the festive passengers. It was November first. Día de los Muertos—Day of the Dead:
The city was vibrant in multi-color paper cutouts. Crimson, fuchsia, canary yellow, cerise, and chartreuse papers fluttered from every shop, cart, and street. Even at the early hour, the Zocalo was filling with people in costume, waiting for the Day of the Dead parades. More and more people began arriving, their faces painted to resemble skulls.
Rapt in her own world, Ceren had forgotten about the holiday. Fear caught her breath. What if the clinic wasn’t open or closed early? The urgency spurred her on, but the gathering crowds and ghoulish spectacle of the city slowed her stride.
At every corner, she saw sugar skulls and pan de muerto, bread of the dead, for sale. Rows of painted ceramic skulls lined the stalls around the Zocalo. Macabre skeleton dolls, carvings, caps, shoes, earrings, necklaces, and assorted kitsch vied for her attention.
For those not artistically inclined themselves, Calavera-Catrina and Catrine face painters had set up shop in front of the cathedral. Ceren paused, momentarily joining the onlookers. The artists created black hollows around their subjects’ eyes, painting black over the lids, eye sockets, and areas beneath the eyes. Whitewashing the rest of their faces clown white, the artists added a black triangle at the tips of their noses, and drew black ‘stitches’ over their lips. Some finished with black blusher under the cheekbones for a hauntingly hollow effect.
Everywhere, I see the face of death.
A few faces sported colorful flower shapes around their eyes with hearts and curlicues on their foreheads and cheeks. But it was the half-decorated faces that caught her eye, grins that began on natural features and crossed the face to become painted skull smiles.
Ceren stared at the half-skull makeup, the faces caught between life and death. She sniffed, twisting her mouth into a grimace. I can relate.
Smelling the fresh-baked pan de muerto, she realized she had left before sunrise without eating. She bought a loaf and hungrily tore off a bite, but as it touched her lips, she shivered. Still shaking, beads of perspiration broke out on her forehead. What am I doing, partaking in some kind of unholy communion with the dead? As she struggled to swallow the bread, she suddenly felt nauseous.
“Are you all right, miss?” asked the shopkeeper.
Ceren smiled wanly. “Just a little dizzy.”
The shopkeeper nodded knowingly. “I also get emotional on Día de los Inocentes.”
“Day to celebrate the lives of the innocents?” Ceren asked, unfamiliar with the phrase.
“Sí, los niños who died.”
“The children who died,” Ceren repeated softly. Now I understand. Her body sagged, and she leaned against a lamppost for support.
The entire country’s remembering the lives of their deceased children, and today, of all days . . . .
A wave of nausea quickly grounded her in the present. She took a deep breath to bolster her determination, referred to her map, and started off toward the nearest hospital. Surges of people wearing Catrina and Catrine faces passed her on the sidewalk, watching her with their blank, black eyes. As absurd as it seemed, she had the unreasonable feeling that the grinning skull faces knew her intentions and were jeering at her.