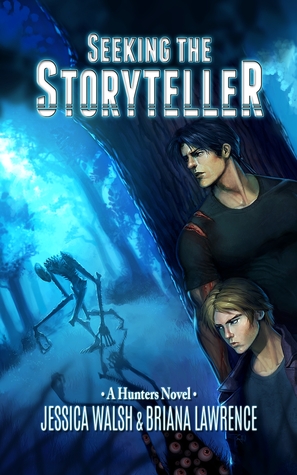 About the book:
I know of the Storyteller, it whispers into the man’s ear, I’ve met him. If you promise not to kill me, I’ll take you to him.

Alix Andre DeBenit and Randall Fagan are Hunters, part of a hidden network of humans who track and kill the monsters lurking in our world so everyone else can pretend they don’t exist. But when a living shadow mentions someone called the Storyteller, Alix hesitantly decides to learn more.


They say the Storyteller lives in a massive library full of books that tell every being’s life story. He can read
these books, rewrite them and change anything he wants, even if
it’s already happened. That’s the power Alix wants, the power to bring his murdered family back and he’s determined to make the Storyteller do it.

He just has to decide if working with the very creatures he’s supposed to kill is worth it.

1. Your book, Seeking the Storyteller, has an interesting premise. Please describe this book in 5 words or less.
Fantasy, Supernatural, Demons, Shadows, Rewriting
2. If you had the power to rewrite any story, which story would you choose?
Jessica: I actually love doing this and used to do it a lot in fanfiction, before I got back into original writing.  I think if I could rewrite any story it would be some old myth, like Pandora.
Briana:  I think retelling an old myth would be great, reimagining it to fit into today.  I think that’s sort of what Urban Supernatural does.  It’s supernatural creatures who we all may have already heard of: vampires, werewolves, shapeshifters, things like that... only it’s in our day and age, and how we’d deal with them today, and how those creatures would deal with modern times.
3. Tell us about Alix Andre DeBenit and Randall Fagan?
Jessica:  Randall Fagan hates his first name, so he’ll always go by Fagan.  He’s a carefree type who appears to not care about much, but he has a clear idea of where he wants to be and what’s ‘expected’ of him.  He easily falls into the mentor role but occasionally needs time alone to remind himself that he has control of the situation.  He’s the main Hunter of the group, the one Alix is learning from and partners with.  He knows how to use a variety of weapons to hunt down demons but he prefers the demonic sword Eegil.  Unlike his partner he doesn’t see all demons as evil, just the ones who mess with humans.
Briana:  Alix is completely different.  He’s pretty hard-headed and set in his ways.  He believes that all demons are bad, period.  Once Alix is focused on something he stays focused until the job is done.  He has his own reasons for being so jaded by demons and Fagan knows that, but that’s why they work so well together.  Fagan keeps Alix in check but doesn’t make Alix feel bad for his way of thinking.  Alix is good at what he does and is a good partner to have on a mission.  He will always have his partner’s back.
4. You are a writing duo. What advantages do writing with a partner have?
Jessica: For me, it makes the working out of ideas so much easier.  Before I write them, I usually explain my ideas to her and in the process sort them out in my head, so when it comes time to write I have a better idea of where I’m going.  It’s also a HUGE help when I hit writer’s block or can’t seem to get past a scene.
Briana:  I agree.  The way we work is that she writes it first, then I read over it and add things.  I’ve written books on my own and she actually read over them first before I even attempted to have them published, so for Storyteller it’s kind of reversed.  I do some writing too with it, I’ll add details and flesh things out sometimes that she may have missed, or I’ll make notes like, “What if we do this?”  It’s also great to have someone to discuss ideas with.  We’ll be driving and eating ice cream and suddenly someone is like, “Oh, what about this?”  And the person is like, “Yeah yeah!”  Or, “Hmmm... how about this?”  We have a lot of notes and emails between the both of us, and use different colors for when we change something.  It’s pretty great.  I feel like even if we disagree on something we work it out pretty quickly, just recently we mapped out the entire third book even if we’re still working on the second.
5. What's next for you?
Jessica: We’re working on editing Book 2 now, called “Beneath the Chapter”.  We have about 7 books planned for this series, so there’s a ways to go.
Briana:  On top of that we each have our own solo projects that we’re eager to get to.  Jessica has this great series planned and I have a few works, too.  We’re like a crazy writing team, I couldn’t ask for a better work routine right now.  You can actually see all of it here:  http://www.sewntogetherreflections.com/