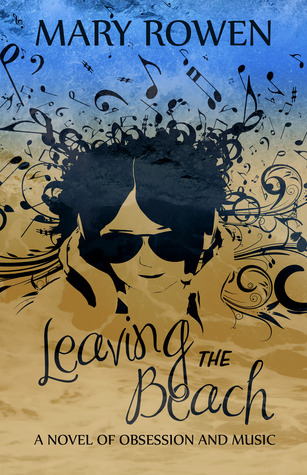 1. Leaving the Beach's main character deals with bulimia. Why did you give your character an eating disorder?
Well, I had eating disorders for many years--from about age 15 to age 30. During that time, I was both anorexic and bulimic (mainly bulimic). But I also went through brief periods of time when I ate fairly normally. And believe it or not, I don't think anyone--even my parents, best friends, and boyfriends--ever knew I was sick because I hid it all so well. In other words, I was living a fairly full life, despite my illness. So I really wanted to write a book about a character with a serious eating disorder, but who also has other things going on. Another way to say it is that I didn't want to write an "issue" book.
2. Erin's also obsessed with music: Jim Morrison, David Bowie, and Bruce Springsteen, to name a few. What is it about these musicians that resonate with Erin?
All of these musicians are strong, sexy, iconic, male singer-songwriters who have (or had, in the case of Jim Morrison) the ability to control an audience. This is real power. Erin, who lacks self-esteem and strong male role models, turns to these icons to fill the voids in her life.
3. Lenny Weir is a musician with a lot of problems of his own. What pulls Erin and Lenny together?
Erin is very drawn to Lenny because she sees herself--and her suffering--in him. But while she suffers silently, Lenny's suffering is done in public. Erin can hide in her house, eating and vomiting, but Lenny needs to go up on stage and perform, and the press documents his every move. Erin finds this both admirable and sad, and she wants to help him. As far as Lenny being drawn to Erin, well, when he meets her in the bathroom at the nightclub, he recognizes her inner beauty. But that's all I'll say about him, because I don't want to add any spoilers to this interview.
4. This novel has been described as "inspiring," "insightful," and "brutally honest." Would you agree with those descriptions?
Well, I hope it's inspiring and insightful, but I guess that depends on the reader. As for the brutally honest part, I do think that's accurate. I tried very hard to make Erin a real and vulnerable character. In regard to the elements of the story that deal with bulimia, I drew on my own experiences with that disease as much as possible. That wasn't easy in some cases, but I did my best to be accurate and honest.
5. What are you working on now?
The novel I'm currently working on (working title: Amateurs and Radios) is really different than Leaving the Beach or its "partner book", Living by Ear. Living by Ear and Leaving the Beach are both very woman-centric and music themed, and although the stories are quite different, they have a lot in common. But my new story is about a twenty-something woman who reluctantly befriends the 70-year-old ham radio operator who lives across the street from her. There's very little music in the story, and many of the chapters are written from the perspective of the man. That's a huge change for me, and a real challenge. I'm having a lot of fun writing it, though. I just hope other people will be interested in reading it!

Check out http://www.maryrowen.com/ to find out more about this author and her books!
Interview Leaving the Beach Mary Rowan