Cover Reveal: A Day Of Fire

By Marcie - September 17, 2014
I am excited to reveal the cover for “A Day of Fire: A Novel of Pompeii"! This is a book for historical fiction TBR piles everywhere—six authors (look at that list!), one volume, the gripping story of Pompeii’s final days. And now you can pre-order your copy so that, come November 4th, you won’t have to wait.

Pompeii was a lively resort flourishing in the shadow of Mount Vesuvius at the height of the Roman Empire. When Vesuvius erupted in an explosion of flame and ash, the entire town would be destroyed. Some of its citizens died in the chaos, some escaped the mountain's wrath . . . 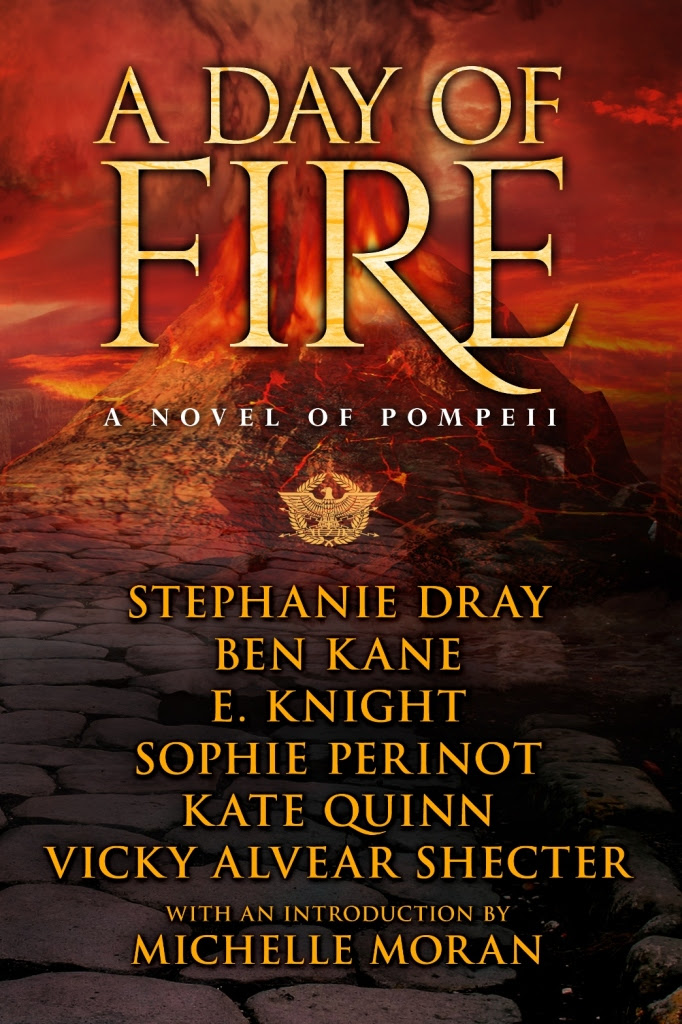 Six top historical novelists join forces to bring readers the stories of Pompeii’s residents—from patricians to prostitutes—as their world ended. You will meet:

A boy who loses his innocence in Pompeii's flourishing streets;
An heiress dreading her wedding day, not knowing it will be swallowed by fire;
An ex-legionary who stakes his entire future on a gladiator bout destined never to be finished;
A crippled senator welcoming death, until a tomboy on horseback comes to his rescue;
A young mother facing an impossible choice for her unborn child as the ash falls;
And a priestess and a whore seeking redemption and resurrection as the town is buried.

STEPHANIE DRAY is a multi-published, award-winning author of historical women’s fiction and fantasy set in the ancient world. Her critically acclaimed historical Nile series about Cleopatra’s daughter has been translated into more than six different languages, was nominated for a RITA Award and won the Golden Leaf. Her focus on Ptolemaic Egypt and Augustan Age Rome has given her a unique perspective on the consequences of Egypt's ancient clash with Rome, both in terms of the still-extant tensions between East and West as well as the worldwide decline of female-oriented religion. Before she wrote novels, Stephanie was a lawyer, a game designer, and a teacher. Learn more at www.StephanieDray.com

BEN KANE worked as a veterinarian for sixteen years, but his love of ancient history and historical fiction drew him to write fast-paced novels about Roman soldiers, generals and gladiators. Irish by nationality but UK-based, he is the author of seven books, the last five of which have been Sunday Times top ten bestsellers.Ben’s books have been translated into ten languages. In 2013, Ben walked the length of Hadrian’s Wall with two other authors, for charity; he did so in full Roman military kit, including hobnailed boots. He repeated the madness in 2014, over 130 miles in Italy. Over $50,000 has been raised with these two efforts. Learn more at http://www.benkane.net/

E. KNIGHT is an award-winning, indie national best-selling author historical fiction. Under the name, Eliza Knight she writes historical romance and time-travel. Her debut historical fiction novel, MY LADY VIPER, has received critical acclaim and was nominated for the Historical Novel Society 2015 Annual Indie Award. She regularly presents on writing panels and was named Romance Writer’s of America’s 2013 PRO Mentor of the Year. Eliza lives in Maryland atop a small mountain with a knight, three princesses and a very naughty puppy. For more information, visit Eliza at www.elizaknight.com.

SOPHIE PERINOT is the author of the acclaimed debut, The Sister Queens, which weaves the story of medieval sisters Marguerite and Eleanor of Provence who became queens of France and England respectively. Perinot has both a BA in History and a law degree. A long-time member of the Historical Novel Society, she has attended all of the group’s North American Conferences, serving as a panelist at the most recent. When she is not visiting corners of the past, Sophie lives in Great Falls, VA. Learn more at www.SophiePerinot.com

KATE QUINN is the national bestselling author of the Empress of Rome novels, which have been variously translated into thirteen different languages. She first got hooked on Roman history while watching "I, Claudius" at the age of seven, and wrote her first book during her freshman year in college, retreating from a Boston winter into ancient Rome. She and her husband now live in Maryland with an imperious black dog named Caesar. Learn more at http://www.katequinnauthor.com

VICKY ALVEAR SHECTER is the award-winning author of the young adult novel, Cleopatra’s Moon (Arthur A. Levine Books/Scholastic, 2011), based on the life of Cleopatra's only daughter. She is also the author of two biographies for kids on Alexander the Great and Cleopatra. The LA Times called Cleopatra’s Moon--set in Rome and Egypt--"magical" and "impressive." Publisher’s Weekly said it was "fascinating" and "highly memorable." Her young adult novel of Pompeii, Curses and Smoke (Arthur A. Levine/Scholastic), released in June 2014. She has two other upcoming books for younger readers, Anubis Speaks! and Hades Speaks! Vicky is a docent at the Michael C. Carlos Museum of Antiquities at Emory University in Atlanta. Learn more at http://www.vickyalvearshecter.com/main

To win a copy of A Day of Fire: A Novel of Pompeii please complete the Rafflecopter form. There are two copies (Ebook or Paperback) up for grabs. Giveaway is open to US & UK residents only.

Giveaway ends at 11:59pm on September 26th. You must be 18 or older to enter.
Winners will be chosen via Rafflecopter on September 27th and notified via email.
Winners have 48 hours to claim prize or new winner is chosen.

A Day Of Fire Cover Reveal