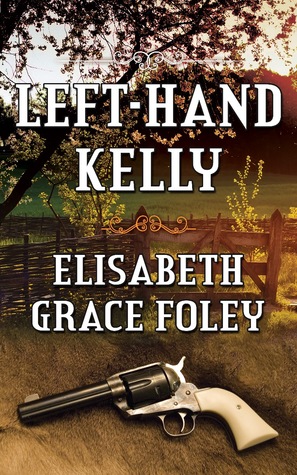 Sixteen-year-old Lew Kelly grew up idolizing his enigmatic ex-gunfighter father. Everyone thought Lew’s habit of practicing his quick draw was a harmless amusement—until the day when a boys’ hot-headed quarrel exploded into gunplay, with disastrous results.

Three years later, Lew is withdrawn and bitter—and he still carries a gun. When an unexpected twist of circumstances forces him to face again the memories and the aftermath of that ill-fated fight, will old wrongs be righted—or will the result be an even worse tragedy than before?

Author Bio: Elisabeth Grace Foley is a historical fiction author, avid reader and lifelong history buff. Her first published story, "Disturbing the Peace," was an honorable mention in the first annual Rope and Wire Western short story competition, and is now collected with six others in her debut short story collection, The Ranch Next Door and Other Stories. Her other works include a series of short historical mysteries, the Mrs. Meade Mysteries; and short fiction set during the American Civil War and the Great Depression. A homeschool graduate, she chose not to attend college in order to pursue self-education and her writing career.
Author Website: http://www.thesecondsentence.blogspot.com
Twitter: http://www.twitter.com/ElisabethGFoley
Goodreads: http://www.goodreads.com/author/show/5266694.Elisabeth_Grace_Foley
Purchase links
Amazon: http://www.amazon.com/Left-Hand-Kelly-Elisabeth-Grace-Foley/dp/1499377150/
Createspace: https://www.createspace.com/4795309
Excerpt:
Still nobody moved. Even Butch, pretty well sobered now by his scare, no doubt, was completely silent. Every eye in the room was fixed on the two brothers. I could hear Griggs’ quick excited breathing in the background.
Matt Kelly’s face showed no emotion, and he behaved as though the rest of us weren’t there. He stood looking at Lew, who had his head bowed as though he didn’t want to look his older brother in the eye. Matt kept his grip, though not a hard one, on the wrist he’d grabbed, and then after a minute he let it fall.
“I want you to go home,” he said quietly. “The horses are outside. I’ll be along shortly.”
Lew just barely nodded without looking up.
“Lew,” said Matt so quietly that only the few of us nearest to him heard it. Lew lifted his head and looked straight into Matt’s eyes for a second, and his brother’s look had some influence that straightened his shoulders and made his tense face look more normal. He nodded again, more naturally, and Matt drew aside to let him go. The silence in the room was the kind that comes when people are not exactly sure what they’re witnessing as we all watched Lew bend to pick up his gun and then slip out the door into the night.
A fairly small white-haired man came out of the corner where the solitary voice had spoken before. It took me a minute to realize he was the sheriff even after I saw the badge on his coat, because he had a mild, insignificant-seeming way about him you wouldn’t associate with a lawman—at first glance, anyway.
He approached Matt Kelly, who stood looking off toward the door where Lew had disappeared. “Matt,” he said, “you just came within an ace of seeing your kid brother hung for murder.”
“I know it,” said Matt, meeting the sheriff’s look straight.
You’d have been hard pressed to guess what, if anything, lay behind that cool voice. But Sheriff Clark evidently knew enough to be satisfied with the answer. All he wanted was to make sure his warning had been understood, and I guess he knew it had.
He moved away, but I didn’t see where he went because my eyes followed Matt Kelly. Matt turned and went out by the side entrance. As the doors swung back behind him the long-suppressed murmur broke out all through the room, as men put their heads together, not to pick up what they’d been saying a few minutes ago, but to talk over what had just happened.
Elisabeth Grace Foley Feature Left-Hand Kelly