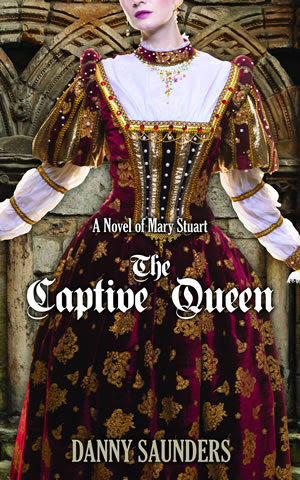 Political schemes, religious partisanship and unbridled love shake the Royal Court of Scotland at the end of the Stuart dynasty.

Witness to sordid murders, spy for Her Majesty among the Protestants of the infamous preacher John Knox, forced to give up her one true love, thrown out onto the streets then ruthlessly attacked by a drunkard, Charlotte Gray will do everything in her power to remain the sovereign’s lady-in-waiting.

As for the Queen of Scots, she faces turmoil of a completely different kind: prisoner in a castle under the command of her cousin, Queen Elizabeth I of England, Mary Stuart learns that she is the victim of a vast conspiracy and that her English counterpart has ordered her imminent execution.

Despite their hardships, Mary and Charlotte will keep their dignity throughout the storm. The two women will finally find serenity, one in the arms of a man and the other in the arms of God.

Interwoven with historical facts of the era, the thrilling The Captive Queen saga is worthy of the greatest royal intrigues that still fascinate us several centuries later.

1. This novel focuses on two people: Mary Stuart and Charlotte Gray. Compare and contrast the struggle of these two women.
Mary Stuart, Queen of Scots, is an unhappy woman. She lost her parents too soon and she was never happy in love. Its role as sovereign seems to be a burden. She trusted the wrong people. Charlotte Gray is a woman determined in all aspects of her life. She has no remorse. But she is loyal to Mary Stuart.

2. Why do you think this time period still fascinates readers?
This period was between the late Middle Ages and early Renaissance. Readers love the family stories of the Tudors and Stuarts. It was a turbulent time for England and Scotland.

3. You describe yourself as "European history enthusiast." What else are you enthusiastic about?
I am very interested in the monarchy and the nobility of Europe. History was written by the great queens and great kings. Europe is the cradle of Western civilization. I love this beautiful continent!

4. You're having a dinner party for a whose-who of historical figures (living or dead). Who are the first ten people you would invite?
Very interesting question! Mary Stuart (of course!), Queen Elizabeth I of England, King Robert the Bruce (of Scotland), King Henry VIII of England, Queen Victoria of Great Britain, Queen Catherine of Aragon, Queen Marie-Antoinette of France, Empress Catherine the Great (of Russia), Empress Sissi of Austria and King Richard the Lionheart (of England). Maybe a peace agreement between Mary Stuart and Elizabeth Tudor?

5. What's next for you?
I continue my book campaign and I was writing my next historical fiction..


Danny Saunders is a true European history enthusiast. He has always been keenly interested in royalty. Danny holds a bachelor’s degree in political science and also pursued communication studies at the university level. He has worked as a journalist for various written and electronic media. Of Scottish descent, Danny takes genuine pride in his British roots. The Captive Queen: A Novel of Mary Stuart is his first historical novel.

To find out more about the author Danny Saunders, you can visit his website at www.dannysaunders.com. You can also find him on Facebook, Twitter, and Goodreads.

Review at A Chick Who Reads

Interview at To Read or Not To Read

Review & Giveaway at A Bookish Affair

Review & Giveaway at Peeking Between the Pages

Excerpt & Giveaway at So Many Precious Books, So Little Time

Review at Princess of Eboli