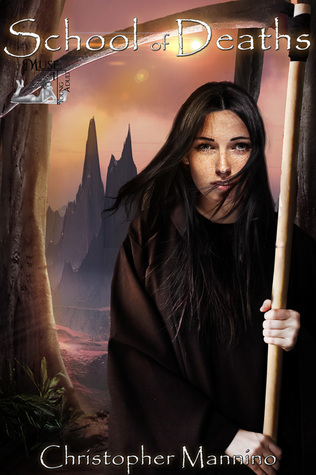 Thrust into a world of men, can a timid girl find bravery as the first female Death?

Thirteen-year-old Suzie Sarnio always believed the Grim Reaper was a fairy tale image of a skeleton with a scythe. Now, forced to enter the College of Deaths, she finds herself training to bring souls from the Living World to the Hereafter. The task is demanding enough, but as the only female in the all-male College, she quickly becomes a target. Attacked by both classmates and strangers, Suzie is alone in a world where even her teachers want her to fail.

Scythes hungry for souls, Deaths who subjugate a race of mysterious magicians, and echoes of an ancient war with Dragons.

As her year progresses, Suzie suspects her presence isn't an accident. She uncovers a plot to overthrow the World of Deaths. Now she must also discover the reason she's been brought there: the first female Death in a million years. 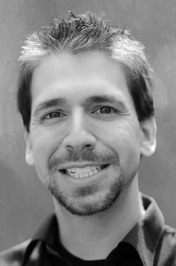 1. Your novel, School of Deaths, came out in May of this year. Please tell our readers a little bit about your book.School of Deaths is a story about overcoming bullying and isolation. It was inspired by a trip I took to Tintagel, in Cornwall, while studying at Oxford University. I became stranded in Tintagel, the legendary birthplace of King Arthur. After a sleepless night above a noisy pub, I climbed onto a rocky peninsula overlooking the Irish Sea at dawn. There were sheer cliffs on all sides, and no rails, or other people. I was completely alone, being struck by fierce winds which threatened to blow me into the icy water below. I envisioned a character completely alone, attacked by bullies and teachers.

This novel is the first novel in the trilogy "The Scythe Wielder's Secret".  School of Deaths is currently available as an ebook, and releases in print this winter. The sequel "Sword of Deaths" releases this coming spring.
2. Where does your fascination with the Grim Reaper come from?
I think Death is a misunderstood figure. We're so terrified of dying that we associate Reapers with fear, but being a Death would be a job, just like any other job. The idea of a single Death taking every soul that dies is even less believable to me than Santa Claus, so I pictured an entire world filled with many Deaths.
3. Suzie is training to be the next Grim Reaper. What are some of the pros/cons of the job?
Suzie's biggest obstacle is not that she's going to be a Death, but that she's the only female in their entire world. She suspects that her sudden appearance, after a million years without a female Death, isn't coincidence, and this starts her down a new and dangerous path, while she tries to uncover the truth.
When she begins to Reap, Suzie faces some serious cons. She has to see the last moments of a person's life, and feels deep empathy for the souls she transports. The world has some interesting pros, such as the ability to use a scythe, a tool able to slice through space and dimensions.
4. You have a background in theater. How has that inspired you?
My greatest strength as a writer is probably my ability to envision a story playing out in front of me. Before becoming a theatre teacher, I spent a number of years in theatrical design. The ability to picture images and abstract situations strongly helps me write memorable locations and settings. I also understand dialogue well because of my experiences as an actor and playwright.
Perhaps my biggest strength from theatre is the ability to start and stop the creative process mid-stream. During the school year, I have no set writing schedule, but am able to pick up and start a draft at will. I believe this comes from years of rehearsing scenes out of order, having to pick up a story in the middle and still have full characterization.
5. When can we expect the sequel to School of Deaths?
Sword of Deaths will be released by MuseItUp Publishing in Spring 2015.

Check out these sites to find out more about Christopher Mannino: