Q &A with Jack MacLean author of GLOBAL PREDATOR

By Marcie - November 20, 2014
Q &A with Jack MacLean
author of
GLOBAL PREDATOR 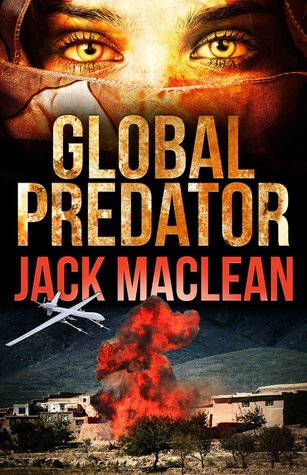 High above the mountains surrounding the beautiful Swat Valley in Pakistan a Global Predator drone circles, waiting to unleash its Hellfire missiles. In GLOBAL PREDATOR by Jack MacLean (Legend Publishing; $10.38 paperback; $2.51 Kindle), the National Security Agency pursues the trail of Osama Bin Laden’s deputy Ayman al-Zawahiri. When a recording reveals new clues about al-Zawahiri’s plans, the NSA’s hunt for the international criminal escalates. A special intelligence team, led by Faiza Azhad an agent on a personal vendetta, plots to catch him at a meeting of high-ranking al Qaeda leaders.

Meanwhile, the local Taliban have been stepping up their attacks on anyone who dares to educate women. The situation is growing desperate; foreign aid organizations have closed their doors to the Pakistanis. All except English aid worker Sally Hodges. Despite the constant threat of the Taliban, Sally remains in Pakistan determined to build schools to help young women achieve an education. All she lacks is capital, which is why she’s agreed to a gift from her old flame Wilkins—a man hiding his own dark reason for being in Pakistan. When Sally is taken hostage at her school, Wilkins has an opportunity to redeem himself—if only he can escape from his own Taliban captors.

As Faiza continues to hunt al-Zawahiri, the clock is counting down to the terrorist rocket attack. Can the Taliban be stopped? GLOBAL PREDATOR is an adrenaline-fueled race through the mountains of Pakistan to a shattering conclusion.

JACK MACLEAN is the pen name of a prize-winning former foreign correspondent for a British newspaper with firsthand experience of Asia. He is the author of eight non-fiction works.

1.      What inspired you to write GLOBAL PREDATOR?

I think there is not enough engaging fiction written that plunges the reader in the middle of current events so they are not just entertained but come away feeling they understand the world better than before. I was fascinated too with how we deal with data and surveillance – whether its banks or the CIA – and how corrupting that is and how we are manipulated by these masters of data.

I was familiar with Pakistan’s problems and Islamic terrorism so the challenge was to write about the technology behind the drones and its limitations. So finding people working in this area who could explain it to me was difficult. Then the problem was to cut down the information so it didn’t get in the way of the storytelling. It took me out of my comfort zone of foreign policy issues.
3.      Who is your favorite character and why? Is there a character that you related to as you wrote the novel?

Well, first I wanted to make sure it was not autobiographical in any way. Then the villains are real life terrorists. The central figure is Wilkins because I wanted to have an anti-hero, who is a rogue banker, initially unsympathetic and selfish but gradually matures and is transformed until he finds his better self. Also to make clear that The Global Predator in the title refers not just to the drone but also the crooked bankers, and terrorists.
4.      Is there a chance that Wilkins and Sally will return for another adventure? If so, where will they go next?

It is possible they could but the original idea was to have the Global Predator take on another mission in another part of the world, such as Iraq.

5.      Faiza Azhad completes her mission by the end of GLOBAL PREDATOR. Do you think she find a new purpose in her life? Where do you see her going by the end of the novel?

She could certainly feature in another field of conflict. I don’t think her lust for revenge has been satiated because Ayman Al-Zawahiri is still alive and going strong.  So she is very driven like the lead character in the TV drama, Homeland.
6.      When you were creating the character Rob Stoner, what aspect of his character was most important to you?

He is a clever schemer who is outwitted by everyone - his boss who sets him the task of finding his co-conspirator, by the Pakistan private investigator, and ultimately by Wilkins in a game of prisoner’s dilemma. So in the end you feel a little sorry for him.

7.      Have you ever been to Pakistan before? Where else have you travelled? What travel experience stands out to you?

Yes, I have been in Pakistan and Afghanistan before the recent wars when it was safe to be a backpacker. So I know the charm of the Swat Valley where most of the action takes place.

8.      Wilkins is featured playing a guitar in the novel. What kind of music does he like to play? Do you play an instrument?

He plays in a rock band and likes to play the blues. I can’t play the electric guitar – or any other kind – but my son does.

9.      How would you classify Wilkins and Sally’s relationship?

Well, Sally is the one the reader identifies with – she is doing something brave and worthwhile – but she is at the mercy of both the Pakistan Taliban – and of course her selfish ex-boyfriend Wilkins. So he tries to ignite her old feelings for him so he can escape but at the end realizes he does love her.

10.  What do you think Sally took from her experiences in Pakistan? How do the events that took place in Pakistan impact her view of the world?

Pakistanis want to educate their children, especially their daughters, and so education has become a key battleground between the violent Islamacists and the rest of the population.  So Sally knows that winning this battle is not only important for the people in the Swat Valley but everywhere.

11.  Malala Yousafzai was featured in the news recently after winning the Nobel Peace Prize for her activism in women’s education in Pakistan. Did her story influence or inspire your novel?

As it happens, I wrote the first draft of the book back in 2008 before she was shot but while the conflict in the Swat Valley was in the news.  So it is a fortuitous coincidence. I haven’t read her biography either so I don’t know how it matches up to the fictional Swat Valley – partly because I didn’t want to feel I needed to rewrite it. The key point is that I am making things up, this is not journalism.

12.  What are the most important pieces of information that you want your readers to understand about the politics in Pakistan? What perspectives on Pakistan do you hope your readers gain?

Pakistan’s government may be awful allies to deal with, and their tolerance of an Islamic agenda is reprehensible – but there are also plenty of decent honest and indeed heroic people there fighting for the right values. We need to help those people.

13.  There is a lot of stereotyping around Islam, especially after 9/11. How did you work with this issue as you were writing?

In the story, I don’t explore Islam very deeply either to condemn it or defend it– but I do try to explain the context – the tribal politics of Pakistan, especially the culture of the Pashtos, as well as the mentality of Al Qaeda people, and the class conflicts in rural Pakistan.  It is important in a story that you see why the actions of each character make sense to them, otherwise they are not credible.

14.  What was one of the biggest challenges in writing GLOBAL PREDATOR?

It was a huge challenge to move from writing journalism and non-fiction books to writing a thriller. It took me a very long time to learn the rules.

15.  What was your writing process like for GLOBAL PREDATOR?

Well I rewrote it many times, often cutting out large chunks of background stuff in between doing my normal work. It is quite frustrating because it could take a long time to  switch gears from researching facts to just sitting there and inventing things, imagining scenes, dialogues, and creating characters. It was very liberating in the end.

16.  There is a lot of different technology featured in GLOBAL PREDATOR. Do you like to stay up to date with the latest tech?

Yes, this was enjoyable, more akin to journalism.  I imagined my readers would be fascinated by this technology, but later I realized they are probably keener to find the main characters and their relationships engaging because that’s what keeps anyone turning the pages. Initially, I had a lot more stuff about the NSA which before the Snowden revelations was quite hard to research.  But I think readers want action, and too much background stops the story moving along.

17.  Were there any authors who inspired you as you were writing GLOBAL PREDATOR?

To be honest, I tried not to read thrillers during the writing process because I wanted to, and needed to, find my own voice rather than trying to copy somebody else’s style. So I like to read things like P.G.Wodehouse because open any page and you realize it couldn’t be anyone else, and you accept his world is real even though it bears only faintest relationship to any real events.

18.  What kinds of topics do you like to see covered in political-thrillers?

I think there is a growing appetite for good fiction about the Islamic world as we try to understand what is going on. It’s the new Cold War – but it’s a peculiar mix of 7th century theology and 21st technology.  But I think nobody really knows how much use this technology is in defeating such an alien mindset. We don’t get why it is so attractive to so many people.

19.  What kind of advice would you give an aspiring author trying to write a political-thriller?

Forget that it is a political thriller and just create vivid characters in whose fate the readers get interested.
20.  What scene was your favorite scene to write?

I think those scenes where a stranger walks into town – Wilkins arriving in the Swat Valley – or Stoner arriving in Islamabad – are fun because you see something exotic through their eyes. The second type of fun scenes is the scenes when the fighting starts and there are huge explosions. Action is much easier than the beginning where you have to set everything up and worry that you will lose the reader’s attention.
Q &A with Jack MacLean author of GLOBAL PREDATOR