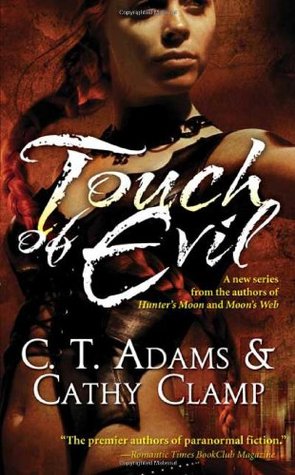 Okay, that’s trite.  But it was quite a while ago that TOUCH OF EVIL was written.  At that time Paranormal Romance was new and Urban Fantasy wasn’t big yet.  What books were out there generally featured vampires who were very, very, sexy.  Which was all well and good.

So we sat down and started saying “what if,” discussing what would be creepiest, scariest, and we would hate the most.

And the Thrall were born: parasites who share the top of the food chain with humans, infest human hosts and take control of their bodies by attaching to the spinal column and taking over space in the human’s brain.  Run by a group of queens, they have a hive mentality—and consider humans “prey” or, in very rare instances “not prey.”

Kate Reilly is Not Prey.   To get there she killed one Thrall Queen, and earned the undying enmity of another, Monica Mica.

Now Monica’s time is running out.  She needs to create her replacement, and wants revenge.  She has the perfect plan to achieve both—infest Kate and make her the new Thrall Queen.

Oh, that was creepy enough to send chills down my spine, and I was going to be the one writing the tale.

But this was a paranormal romance.  What about the love interest?  What kind of man could handle a woman that strong?  Who would be willing to stand by her in the midst of this kind of trouble.

Enter Tom Bishop.  A firefighter and member of the local werewolf pack he is everything Kate could want in a man . . . but is hiding a secret that could destroy her trust in him and any hope they may have for a future together.

So, in honor of Kate & Tom, and with Halloween coming up soon, I ask you:

What scares you most?

What kind of secrets would you not be able to forgive a lover for keeping from you?

Six years ago, the love of her life turned her over to the vampire parasites who call themselves the Thrall. Katie survives the powerful bite of the master parasite only to discover that the Thrall's venom, coupled with her own natural psychic ability, has transformed her. Now she is next in line to be the Thrall Queen--and each day might be her last as a human.

Tom, a handsome firefighter, arouses all of Katie's dormant senses, but her heart shies away. After Dylan's betrayal, how can she trust any man--even a seemingly perfect and terribly sexy werewolf?

Tom's sincerity--and sex appeal--begins to wear down Katie's defenses. But his increasingly insistent charm hides a potentially deadly secret: his werewolf pack is hiding the one person who can stop the Thrall from completing Katie's transformation into Queen--and they won't give her up.

About the authors:
Cie and Cathy's Bio:
C.T. Adams and Cathy Clamp began writing as a team in 1997. They quickly learned that their individual talents in writing created a dynamite combination in historical and paranormal novels!
Cathy resides in the Texas Hill Country with her husband, dogs, cats and 24 Boer/Spanish cross goats!
Cie is currently relocating to the Denver metro area with her dog and cats.
They love reading fan mail and anticipate a long and fruitful writing career.