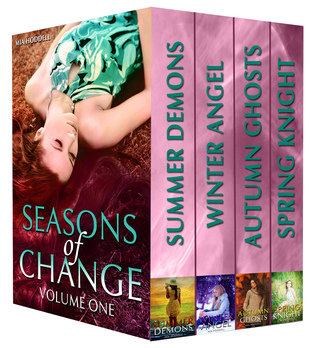 Blurbs:
You can now get all four Amazon best-selling novellas in the Seasons of Change series, plus two exclusive short stories, in one box set.
These feel-good contemporary romances follow the seasons as characters change for the better, find themselves, and overcome fears.
All of the novellas are standalone reads, but can be enjoyed as a series because characters overlap. This box set includes:
Summer Demons: Jenna Shaw jumped on a plane and flew to Portugal to try and forget her past. However, forced to deal with her memories due to an ill-timed joke, Jenna’s holiday is derailed by the charismatic Ethan Brooks. She sees him as an annoyance; he sees her as a challenge. And when all of his usual tricks only serve to push her away, Ethan has to work harder than ever if he wants to win over and help his mysterious girl.
Winter Angel: When Amy’s suggestion of a beach holiday is overruled in favour of skiing she couldn’t have predicted it might make her break the one, and only, rule she has: not to commit to a serious relationship again. The minute she sees Luke, she knows something’s wrong, and her desire to fix people means she wants to be the one to help him. However, she didn’t go on holiday to fall for someone, and whether or not she can move past her insecurities will depend on whether Luke can face his biggest fear.
Autumn Ghosts: Only one person knows what truly lies in Ellie Jeffords’ heart, and that’s herself. Hating the course she is studying, Ellie is failing and when a friend’s cousin, Justin, offers to tutor her, she jumps at the chance. However, as the pressure of exams starts to break Ellie, Justin wants her to confide in him. The only problem is that he can’t persuade her to talk without revealing his own dark secret, and forcing Ellie to choose between her parents’ dreams and her own will cost her something she loves.
Spring Knight: Kayleigh Barrow is most comfortable on stage where she can pretend she’s someone else, but when auditions for the latest production are opened up to the entire university, the lines between fantasy and reality start to blur. Thrown together with renowned player, Aiden Hanson, she can no longer hide her feelings for him. However, he’s never had a serious relationship and Kayleigh refuses to be another conquest. When her acting starts to become real and she can no longer hide behind her character, Kayleigh must decide whether Aiden’s worth the risk, or if he will end up breaking her heart.
Plus 2 exclusive short stories:Summer Revenge: Jenna promised she’d get Ethan back for his prank, and it’s time to cash in. Read about what happened after the couple left Portugal.Season of Love: There’s beach fun, flirting, and mischief as all of the Seasons of Change couples take part in a beach competition.

Guest Post - Overcoming Fear
In the Seasons of Change box set many of my characters have to overcome something in each book. Whether it’s dealing with guilt, grief, hard decisions, confidence, or an actual fear, all of my characters have been or are in the process of going through something and slowly change throughout the novellas.

I chose overcoming obstacles and changing as the main themes for the series because I think characters with some kind of problem makes for a more interesting read. I won’t go as far to say that all of the problems my characters face are things I’ve been through myself, but there are certain emotions and situations I have been in that I have used to develop the books. I will admit that they are exaggerated to what I experienced, so don’t think I’m a guilt-ridden, lacking in confidence person who is afraid of everything!  I just mean that there may be a minute grain of truth that the idea stems from—although I will probably never reveal what they are.

Anyway, in my books I wanted romance to help the characters through the situations, or for a romance to develop because of the fears they have to overcome. I think in certain situations it’s important to have people around you who understand, and can help you grow as a person. I wanted my characters to be challenged by not only their issues, but also by everything that comes with a new relationship. However, the main message I hoped to get across is that people can help and guide someone, but at the end of the day it’s down to the person to choose to change and overcome whatever problem they are facing.