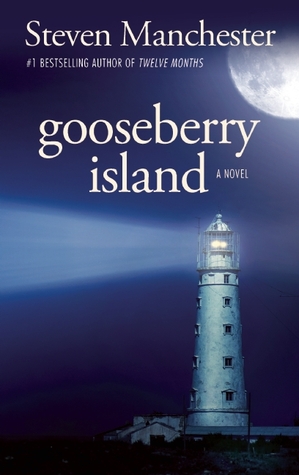 Brief Synopsis:
They met at the worst possible moment...or maybe it was just in time. David McClain was about to go to war and Lindsey Wood was there at his going-away party, capturing his heart when falling for a woman was the last thing on his mind. While David was serving his country, he stayed in close contact with Lindsey. But war changes a person, and when he came home very little had the same meaning that it had before – including the romance that had sustained him. Was love truly unconquerable, or would it prove to be just another battlefield casualty?

Gooseberry Island is the most nuanced, dramatic, and romantic novel yet from a writer whose ability to plumb the depths of human emotion knows few peers.

Author Bio:
Steven Manchester is the author of the #1 bestsellers, Twelve Months and The Rockin' Chair. He is also the author of the award-winning novel, Goodnight, Brian, as well as the critically-acclaimed novel, Pressed Pennies, A Christmas Wish (Kindle exclusive), Wilbur Avenue (novelette), Just in Time (novelette), The Thursday Night Club (novella) and Gooseberry Island. His work has appeared on NBC's Today Show, CBS's The Early Show, CNN's American Morning and BET's Nightly News. Three of Steven's short stories were selected "101 Best" for Chicken Soup for the Soul series. When not spending time with his beautiful wife, Paula, or their four children, this Massachusetts author is promoting his works or writing. Visit: www.StevenManchester.com
http://www.StevenManchester.com
http://www.facebook.com/#!/AuthorStevenManchester

David had been home for six weeks when he pulled into the market, preparing to locate everything on his mother’s grocery list. As he approached the store, he spotted a young teenage boy walking out; he was holding a brown bag. An older man approached the boy and reached out his hand. David gasped and his dizzy mind immediately raced back to Afghanistan and the horrific beating of the young Afghani boy:

There was movement three hundred yards out on the street below. Unusual, David thought. It was a teenage boy, maybe fourteen, carrying a burlap bag and hurrying home before dark. Never seen him before, David thought.
In a flash, a man—a Taliban fighter—jumped out of the shadows and grabbed the boy’s arm, pulling him to the street and spilling the contents of his sack. As the teenager yelled for help, another Taliban soldier emerged from the darkness. The boy screamed louder, but not a single soul came to his aid…

It only took a few seconds, but the whole scene played out in sequence in his mind—both men yelling and slapping the boy as he screamed for help; the slaps turning to a vicious beating until finally the boy was dead. He could almost hear Command say “Negative” again after he asked if he could intervene. He felt the anguish in his soul threatening to overwhelm him, but it was quickly replaced by a burning rage.
His eyes filled with tears, David returned to the present and started for the man in a mad rush. He was three steps from the shocked stranger when reality clicked in. It’s the boy’s father, he realized. He’s…he’s okay.
David’s body convulsed. He’d forgotten he was home, and the reality of it slapped him hard in the face.
The man pulled the teenage boy close to him; both of them were frightened by David’s sudden charge toward them.
“Sorry,” David said, though it sounded more like “Sigh.” Trying unsuccessfully to smile at them, he turned on his heels and hurried back to the Mustang.

For the next hour, David sat alone in his car, trying to calm the physical effects of his anxiety. Once he’d reined that in, he spent another two hours beating back the depression that always followed in anxiety’s wake.
His wasn’t sure whether the abyss existed within his heart or mind, but he knew that he was now filled with a great void—nothingness. There was no light there, only darkness. There was no hope, only despair. In time, he’d learned to embrace the silence, as the screams and whimpers of faceless victims became echoes that returned again and again, pushing the line of madness. Yet, the solitude was relentless, enveloping, merciless. It would have been better had I never existed, he thought, fearing another moment more than cashing in and leaving it all behind. No love, he thought, no peace. His memories were slanted in such thick negativity that his entire past would have been better off erased. And no one knows I’m dying inside, he thought, inviting another wave of panic attacks to crash onto the shore of his weary mind.
He closed his eyes tightly and tried to calm the short labored gasps. Just ride the wave, he told himself. Just ride the wave.
But in another room in his mind, he knew that even if he rode that wave—and didn’t crack his skull on all the rocks beneath him—he’d have to take the ride again and again. It didn’t take long before the jagged rocks seemed like the more merciful option.

Enough time had passed for Lindsey to realize David was not coming after her. He’s obviously in a lot of pain, she thought, and doesn’t want to burden anyone with it. She shook her head. But I care way too much about him to let him go through this alone.
With Craig’s permission, she slammed David’s front door behind her and marched through the living room into the kitchen. “Don’t you dare play the coward with me, David McClain,” she shouted before even reaching the room.
As she expected, David had been staring out the kitchen window into nothingness. With tear-filled eyes, his head snapped up. “Don’t you ever call me that word…ever!”
She stared at him for a few long moments before her heart softened. “Then go ahead, tell me that you don’t want to see me anymore and I’ll leave you alone forever.”
He looked at her with tormented eyes but didn’t say a word.
“But you can’t, can you?” she said, her entire insides starting to tremble.
“It’s not you,” he vowed. “It’s me. I’m just not…”
“Don’t you dare feed me that tired line! I spent a year praying for you…writing letters and wishing for us to…” She stopped, trying in vain to contain her emotions.
His face looked panicked, as his mind obviously spiraled out of control to gather the right words. “I don’t have the words,” he said in less than a whisper.
“After the first time I came here, I thought for sure you’d chase after me,” she said. “I’m not stupid, David. I realize something happened over there that has you all twisted up. But I also thought that once you saw my face, you’d…” She stopped again and began to cry.
David placed his hand on hers. She started to pull away, but he stopped her, intertwining their fingers. “Lindsey, please…please don’t say anything until I finish. Just hear me out. Okay?”
“Okay,” she said, her tears threatening to flood her face.
He took a few deep breaths. “I've given this a lot of thought, and I want you to know that I've never lied to you…and I don't plan to now.” He shook his head. “I’m so messed up right now, Lindsey, I can’t even explain it.” He could barely hold eye contact with her. “I really hope we can be together someday…more than you can ever imagine. But I’m just not ready yet. I…I need to heal,” he stuttered.
She took a deep breath and held it.
“Torn isn't even the word for what I’m feeling over this,” he babbled on. “The last thing I want to do is hurt either of us.”
“I don’t think we have to say goodbye, though,” she said, feeling the panic of desperation creep into her soul. “Don’t you remember the night we shared on that bench?”
His eyes grew even more distant. “I really wish things were different,” he said, “that life didn’t have to be so difficult.” He shrugged. “Time will tell, I guess.”
“You guess?” She returned his shrug to him, perturbed.
“Lindsey, I don't know what the future holds, but I do know that I don't want to destroy any chance we might have at it …just because I might not be ready for it yet.” He grimaced. “I need time to find myself, okay?”
Lindsey, the child of a PTSD victim, shook her head. “You don’t have to find yourself, David. You just have to remember who you are…who you’ve always been.”
He nodded, tears streaming down his face.
Lindsey took a deep breath and surrendered. “David, I’ve told you the way that I feel for you and what I want for us. That’s all I can do. The rest is in your hands.” She peered into his dull eyes. “I can only hope that you’ll think of me every day, as I will you. I hope a lot of things, David.” She paused to collect herself. “Most of all, I hope the day will come when Afghanistan is behind you and we can fall in love all over again and catch up on all the things we’ve missed.” Mimicking him, she shrugged. “Maybe you’re right. I guess time will tell.” She pulled her hand away from his and felt her heart rip clean out of her chest. “Until then, you’ll be in my thoughts,” she whispered.
“I’m so sorry, Lindsey,” he sobbed, his shoulders rocking.
“I love you, David,” she said and, with one final attempt, grabbed his chin and forced eye contact between them. “Now tell me you don’t want to see me and I’ll leave you alone,” she whispered.
As he looked at her, Lindsey could clearly see the anguish in his eyes.
“You can’t, can you?” she said, hopefully.
His tears continued to leak down his cheeks. “I don’t want to see you…for now,” he said, and turned his eyes away from hers.
It felt as though someone had just slugged her in the gut. “Okay,” she gasped and ran out of the house crying harder than she’d ever cried before.

Long after Lindsey had run out of the kitchen, David remained catatonic—until he grabbed a drinking glass off the counter and threw it onto the floor where it broke into a hundred pieces. Enraged, he began smashing everything he could get his hands on in the kitchen. At the end of the violent outburst, he collapsed to the floor and began to weep. With his head in both hands, he screamed, “I love you, too, Lindsey.”
Day turned into dusk and, like most nights, just beyond the sobs and sniffles the world turned quiet and black.

After four or five weeks of self-imposed solitary confinement—a punishment filled with death-defying panic attacks and long, treacherous tunnels of depression—David decided to reach out to the men he had served with. They’re the only ones who can relate, he thought. And I wonder how they’re doing…really doing?
Excerpt Gooseberry Island Steven Manchester