Review and Giveaway: Death Of A Dishonorable Gentleman 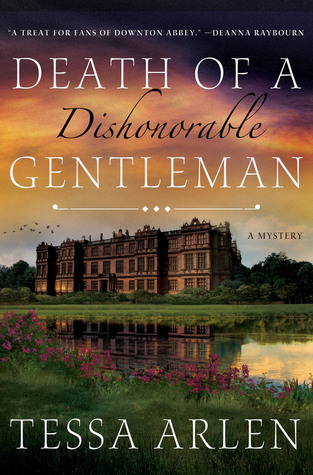 Lady Montfort has been planning her annual summer costume ball for months, and with scrupulous care. Pulling together the food, flowers and a thousand other details for one of the most significant social occasions of the year is her happily accepted responsibility. But when her husband’s degenerate nephew is found murdered, it’s more than the ball that is ruined. In fact, Lady Montfort fears that the official police enquiry, driven by petty snobbery and class prejudice, is pointing towards her son as a potential suspect.

Taking matters into her own hands, the rather over-imaginative countess enlists the help of her pragmatic housekeeper, Mrs. Jackson, to investigate the case, track down the women that vanished the night of the murder, and clear her son’s name. As the two women search for a runaway housemaid and a headstrong young woman, they unearth the hidden lives of Lady Montfort’s close friends, servants and family and discover the identity of a murderer hiding in plain sight.

In this enchanting debut sure to appeal to fans of Downton Abbey, Tessa Arlen draws readers into a world exclusively enjoyed by the rich, privileged classes and suffered by the men and women who serve them. Death of a Dishonorable Gentleman is an elegant mystery filled with intriguing characters and fascinating descriptions of Edwardian life—a superb treat for those who love British novels.
A Party for Winston, the second book in the series to be released in January 2016.

My Thoughts:
Death Of a Dishonorable Gentleman is the debut novel by Tessa Arlen.  It's a new mystery series in the style of Downton Abbey or Upstairs Downstairs.  Lady Montfort is the star of this novel. After spending an inordinate amount of time planning her summer costume ball, her world comes to a screeching halt when one of the guests is found murdered the morning after the ball. She fears the murderer might be someone she is very close to, so she enlists the help of her housekeeper, Mrs. Jackson, to help her solve the mystery.

Mrs. Jackson, however, is not as keen. She feels by helping and confiding in her mistress, she is breaking the class barriers. But eager to solve the mystery of the murder, she accepts. Not to mention a house guest and a maid have gone missing which adds to the drama. Both women--one upstairs, one downstairs--begin to unravel the mystery and put together the pieces.

Death of a Dishonorable Gentleman will keep you guessing as to who the murderer is until the last page. Arlen has written fantastic characters in a fantastic setting. Lady Montfort and Mrs. Jackson work well together. They could be the next Sherlock and Watson. Although for the sake of justice the killer needed to be found, I thought the killer should have been rewarded. Mostly because every fact that came out about the victim--if you can call him a victim--was heinous. The murderer did the world a favor.

I think readers will enjoy this new mystery series, even if you're not a fan of Downton Abbey. This book will keep you on your toes looking for clues. I'm looking forward to the next book in 2016.

Praise for Death of a Dishonorable Gentleman

“Tessa Arlen has a worthy debut with Death of a Dishonorable Gentleman. With a deliciously gruesome murder and an unlikely pair of sleuths, this is a treat for fans of Downton Abbey who will want to devour it with a nice steaming pot of Earl Grey.” —New York Times bestselling author Deanna Raybourn

“In her debut novel, Tessa Arlen weaves an evocative tale of the passions, loyalties and ambitions that divide and unite two classes, upstairs and downstairs, in a stately home. She instantly transports the reader to Edwardian England.”—Christine Trent, author of Stolen Remains

“A dash of noblesse oblige sparkles between the upstairs/downstairs world of Lady Montfort and her housekeeper, Mrs. Jackson, as they work together to unmask the identity of a killer at large on the Montfort’s country estate. As sharp as a Nancy Mitford novel, Tessa Arlen’s sophisticated Death of a Dishonorable Gentleman deserves its place among the Great and the Good of classic mystery.”—Lyndsy Spence, founder of The Mitford Society and author of The Mitford Girls’ Guide to Life.

“Thoroughly enchanting. Arlen’s debut will appeal to fans of Downton Abbey, with its vivid descriptions, firm grip on the intricacies of the time period, and skilled portrayal of the often complicated relationship between upstairs and downstairs.” —Anna Lee Huber, author of the Lady Darby mystery series

TESSA ARLEN, the daughter of a British diplomat, had lived in or visited her parents in Singapore, Cairo, Berlin, the Persian Gulf, Beijing, Delhi and Warsaw by the time she was sixteen. She came to the U.S. in 1980 and worked as an H.R. recruiter for the Los Angeles Olympic Organizing Committee for the 1984 Olympic Games, where she interviewed her future husband for a job. DEATH OF A DISHONORABLE GENTLEMAN is Tessa’s first novel. She lives in Bainbridge Island, Washington.
For more information please visit Tessa Arlen’s website. Read Tessa Arlen’s blog at Redoubtable Edwardians. You can also connect with her on Facebook, Twitter, and Goodreads.
Subscribe to Tessa Arlen’s Newsletter.

I have a paperback copy of this book to giveaway to a lucky reader. Check out the rules below:

– Must be 18 or older to enter.
– Giveaway is open to US residents only.
– Only one entry per household.
– All giveaway entrants agree to be honest and not cheat the systems; any suspect of fraud is decided upon by blog/site owner and the sponsor, and entrants may be disqualified at our discretion.


Review & Giveaway at To Read, Or Not to Read
Spotlight at The Never-Ending Book


Review at Buried Under Books


Review at With Her Nose Stuck in a Book


Spotlight & Giveaway at Passages to the Past


Spotlight at Just One More Chapter


Review at Musings of a Bookish Kitty


Review at A Literary Vacation
Spotlight at CelticLady’s Reviews


Review at A Book Geek


Spotlight at What Is That Book About


Review & Giveaway at The Calico Critic


Spotlight at I Heart Reading