Interview with Sharon Reamer and a giveaway 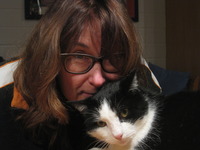 1. Tell me about your love for speculative fiction.

It's obsessive. I know, as a writer, I should read widely; I *should* be reading outside of the genre. But I don't want to. My desire to get lost in someone else's world and accompany their characters through their trials is what I live for when I'm not writing. I also learn a lot by reading speculative fiction - not only SF. Also fantasy. Swords and swordcraft, herbal magic. Horses! There are always a lot of horses it seems in fantasy. Castles! I live in a land (Germany) with a lot of castles but you can never have enough of them, really. But it's mainly being somewhere I can't possibly go. I'm currently rereading LotR for the...fifth time and there's a lot of stuff I never *saw* before. I'm up to the middle of The Two Towers and as anxious as I was the first time I read the trilogy.


2. You recently finished The Schattenreich series. How does it feel?

I have mixed feelings. I miss my characters. They are in my dreams a lot of late, and maybe that means they miss me, too. I picture them doing things that aren't in the books. I have to resist the urge to start writing about those things right now. We need a time out from each other so I can do other things. Like the laundry. Or cleaning out my sock drawer. I think there are strange creatures hiding in there. And I need to meet new characters and learn to love them, too. It's a really good feeling to have the series really finished. I'm not saying I tied up all the disparate threads. After five books, that would be near impossible. But I answered all the major questions. It was a relief. It's important to have closure. For the reader and especially the writer.

3. A lot of your readers really connect with Caitlin. Why do you think that is?

I can only try to explain from my perspective - why I like Caitie. She makes mistakes. She's honest with herself (most of the time) about her mistakes and about her...desires. She knows she's not beautiful and it doesn't really bug her except when she compares herself to the type of women that her boyfriend Hagen usually goes in for. She's smart but not in a look-down-your-nose kind of way. And she has regrets about her past, about what happened to her and her brother. Caitlin is also vulnerable and knows how to hide things - both from herself and everyone else - but sometimes she doesn't hide things very well. I think all those things make her seem a lot like us, like real women dealing with growing up (she's a thirty-something but still having to deal with how to be an adult - like most of us). She's also a scientist in a man's field - geophysics - and has never let that slow her down. She likes men (a lot) and is comfortable with them but doesn't get intimidated by men easily, even men who want to intimidate her. She fights backs - not with karate kicks or bigass swords - but with her intellect. And, on occasion, with blue suede pumps.

4. What is your next writing project?

I'm working on getting a few short stories into shape for publication. There are a few Schattenreich-related short stories, including The Raven's Curse, the (historical) source story for the series (originally published in the anthology, The Phantom Queen Awakes from Morrigan Books). I'm also working on a series of shorts that are offshoots of my main series, a couple of which feature Hauptkommissar Miriam Richter and her immortal guardian who lives in contemporary Cologne. A couple of those stories are also historical in nature. A novella about the Schattenreich villain Dagmar Abel is also in the works.

I also am finishing up a science fiction novel. It's an experiment and a totally new direction.

5. What do you do when you're not writing?
When I'm not writing, I'm thinking about writing, or taking notes or thinking about characters and plots and world-building. I'm also a semi-voracious reader. If I had my way, I'd read all the time during my free time - both fiction and non-fiction. But then I'd never get anything written, so I have to rein in my obsession. I also like to garden, and I like to cook. I have a day-job as a part-time scientist and lecturer at the University of Cologne. Working part-time is not the best way to make a career as a scientist, but I'm way past that so I can just relax and continue to enjoy what I do. The arrangement suits me because I also have enough time to write, and the perks include getting to travel to interesting places to go to meetings or traipse around in ancient ruins. If I gave up my day-job, I think I would miss it. Maybe not for long, but being a scientist is an essential part of who I am.

Sharon Reamer is giving away an e-copy (available in mobi, epub and pdf ) of her first book in the Schattenreich series, Primary Fault. This giveaway is for US only. You must be at least thirteen years old to enter. Please read the giveaway/contest rules before entering.

Geophysicist Caitlin Schwarzbach, out of work and weary of small-town Texas, leaves home. For good.

Separated from her beloved brother Gus at age seven when their parents divorced, she moves to Cologne, Germany to be with him.

Instead of meeting her brother upon her arrival, a Gus lookalike attempts to kidnap her by pulling her into a wall of glass. His accomplice: a curvy Nordic beauty dressed in black taffeta and lace and swarmed by ravens. Caitlin believes her experience to be a product of jet lag and disorientation.

Later that evening at a university reception, Caitlin learns her seismologist brother has included her in a research project with Hagen von der Lahn, amateur archeologist, stylish aristocrat, and dangerously attractive.

After Gus is called away by an earthquake, the deranged Gus doppelganger again tries to drag her away. Hagen rescues her and spirits her to his castle near the Rhine.

A novel of supernatural suspense, Primary Fault tells the tale of a woman's quest to save her brother. The mixture of science meets magic pits beings from a Celtic Otherworld against atheistic Druids and will delight fans of a tightly plotted fantasy with richly drawn characters.