The mystery behind crop circles is solved! 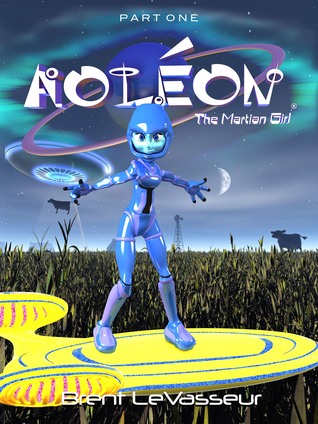 Curious, Gilbert ventures out to discover the source of the light and stumbles into a beautiful Martian girl sitting in a crop circle. Farmer Johnson also investigates the strange light, and thinking that Gilbert and Aoléon are vandals, he chases them. But they sprint to Aoléon’s saucer and escape only to be pursued by the U.S. Air Force.

Gilbert has never been attacked by swarms of giant killer robots. Never met strange aliens from other worlds. Never skyboarded across a megalopolis hidden deep inside an extinct volcano. Never trekked across a vast Martian desert. And never been eaten alive by a gigantic slor (well, almost never, unless you count Billy the fat bully at school).

And luckily, he has never ever confronted an evil ruler of Mars bent on conquering the Earth to steal its cows.

This may be the adventure Gilbert always wished for.

If only he can survive.

My Thoughts:
Aoleon is a Martian girl out for a “practice” run for her pilot’s test by buzzing Earth. While here making crop circles, she picks up Gilbert (a farm boy from Nebraska,) outruns the Air Force, and escapes with Gilbert to Mars and this all happens in just the beginning of the book. Many more adventures await them once they arrive on Mars.

This is a really fun book, filled with fun, colorful illustrations. The two main characters are lovable and you want to get to know them more. Gilbert is trapped in his Nebraska farm life in a family that fights a lot. He dreams of going to distant planets and fighting killer robots. He knows there is something or someone out there for him. Aoleon is a girl with a sense of adventure, just what Gilbert needs. This is a great opening to the series. I’m in the second part now and have a review coming on it tomorrow but as for part one, I’m really digging this series and can’t wait to continue on. If you like middle-school series or have a middle-school age child, this one needs to be in your TBR pile.