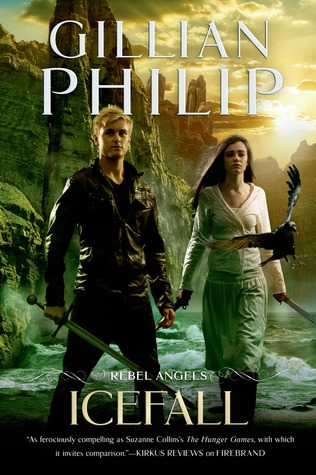 New York, NY—Tor Books is excited to announce the on-sale availability of a new hardcover and e-Book title, ICEFALL by Gillian Philip (ISBN: 978-0-7653-3325-4; $25.99; March 24, 2015), the fourth and final novel in her critically acclaimed Rebel Angels urban fantasy series.
The story began with Firebrand in the 16th century on the far side of the Veil that protected the Sithe’s peaceful world from our own troubled one. But Sithe Queen Kate NicNiven had her eyes set on more than her own kingdom and determined to tear down anything in the way of her ambitions. Seth and Conal MacGregor are two brothers with a complicated relationship who end up on the wrong side of both the Veil and Queen Kate. Firebrand followed the two as they fought to survive in a foreign land embroiled in religious wars, as well as protect the Veil and reclaim their birthright from the Queen.
Bloodstone found the brothers in modern day England after spending centuries hunting for a mysterious gem demanded by Queen Kate. But in those years they also managed to slip through the Veil on a few occasions—and cause no small amount of violent havoc. Meanwhile, a young thief named Jed Cameron gets swept up in the struggle between worlds and is thrust into the fray of intrigue and betrayal. In the collision of two worlds, war and tragedy are inevitable, especially when treachery comes from the most shocking of quarters.
In Wolfsbane, the drama reached a shocking fervor. Rory, the son of Seth MacGregor, was angered by his house arrest and the looming death threat from Queen Kate—so the prophesied savior of the Sithe followed the footsteps of his father and crossed the Veil. On the other side he met Hannah Falconer, who would do anything to escape her worldly woes, even if it meant taking up with the strange and wild Rory. Meanwhile, Seth struggled ever more against the wicked Queen and when years of stalemate were shattered by a surprise attack, he was devastated to learn just who had betrayed him.
Now, in ICEFALL, the final installment in the Rebel Angels series, death stalks Seth MacGregor’s clan in their otherworld exile. Kate NicNiven is close to ultimate victory, and she is determined that nothing will keep her from it. Not even the thing that took her soul: the horror that lurks in the sea caves. But Kate still needs Seth’s son Rory, and his power over the Veil. And she’ll go to any lengths to get him. Seth’s own soul is rotting from the wound inflicted by Kate, and survival for his loved ones seems all he can hope for. But might a mortal threat to his brother’s daughter force him to return to his own world to challenge Kate? And will Rory go with him? Because Rory suspects there’s a darkness trapped in the Veil, a darkness that wants to get out. But only one Sithe knows how near it is to getting its way: Seth’s bound lover, the witch Finn. Nobody gets forever. But some are willing to try...
Rendered with complex characters full of life and a world fraught with intrigue, Philip has exquisitely brought the Rebel Angels urban fantasy series to a thrilling end.

More Praise for the Rebel Angels series:“This new world is made more familiar with the return of self-deprecating Seth and his adored older brother Conal and their snappy dialogue, but a whole new younger generation makes the family drama even funnier.... The fairie qualities of the Sithe and the otherworld remain strong and compelling for fantasy lovers.”
—RT Book Reviews (4 Stars), on Bloodstone
“…ferocious tangle of family politics and passions…. Still, patient, persistent readers will be rewarded with a conclusion of terrifying savagery and reassuring precision.”
—Kirkus Reviews on Bloodstone“Setting the stage for more conflicts yet to come, Philip’s second series entry (after Firebrand) is a compelling tale of love and deceit that may have a broad appeal to fantasy readers.”
—Library Journal on Bloodstone

GILLIAN PHILIP was born in Glasgow, lived for twelve years in Barbados, and now lives in the north of Scotland with her husband, twin children, three dogs, two sociopathic cats, a slayer hamster, three chickens, and a lot of nervous fish. She is the Carnegie Medal-nominated author of Crossing the Line and multi-award nominated Bad Faith. Philip also writes the New York Times bestselling middle grade series Survivors as Erin Hunter. For more info on the author, please visit: http://www.gillianphilip.com.

Thanks to Tor/Forge I have 3 hardcopies to giveaway. You must be at least 13 years old to enter. Giveaway is open to US/Canada addresses only. Please read our giveaway policy before entering.