Review and Giveaway: Inspector of the Dead 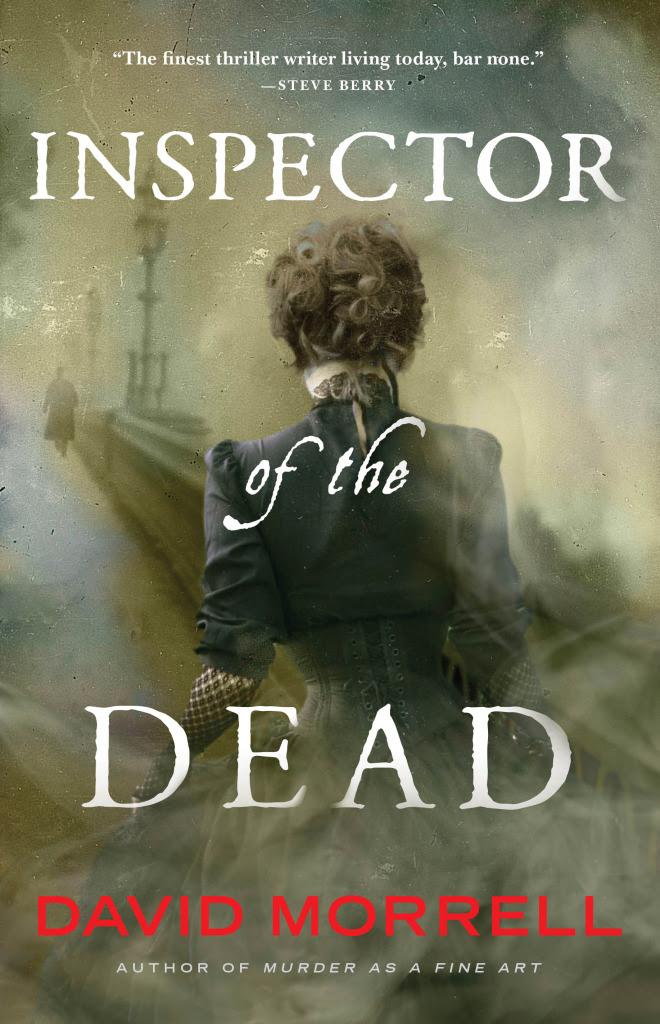 David Morrell’s MURDER AS A FINE ART was a publishing event. Acclaimed by critics, it made readers feel that they were actually on the fogbound streets of Victorian London. Now the harrowing journey continues in INSPECTOR OF THE DEAD.

Thomas De Quincey, infamous for his Confessions of an Opium-Eater,confronts London's harrowing streets to thwart the assassination of Queen Victoria.
The year is 1855. The Crimean War is raging. The incompetence of British commanders causes the fall of the English government. The Empire teeters.

Amid this crisis comes opium-eater Thomas De Quincey, one of the most notorious and brilliant personalities of Victorian England. Along with his irrepressible daughter, Emily, and their Scotland Yard companions, Ryan and Becker, De Quincey finds himself confronted by an adversary who threatens the heart of the nation.

This killer targets members of the upper echelons of British society, leaving with each corpse the name of someone who previously attempted to kill Queen Victoria. The evidence indicates that the ultimate victim will be Victoria herself. As De Quincey and Emily race to protect the queen, they uncover long-buried secrets and the heartbreaking past of a man whose lust for revenge has destroyed his soul.

Brilliantly merging historical fact with fiction, Inspector of the Dead is based on actual attempts to assassinate Queen Victoria.


I wanted to read this book for mainly two reasons. One, though I've not read Confessions of an English Opium-Eater, I'm vaguely familiar with its author, Thomas De Quincey. Two, Inspector of the Dead is 'based on actual attempts to assassinate Queen Victoria'. And, well, there might as well be a third: I love mysteries and historical fiction. So with my trifecta of reasons, it sounded like the perfect book for me.

It's dark, gritty, and I love it! Inspector of the Dead is told from the third person p.o.v, so you get to see the story from several perspectives including the killer's. From the very first page I was hooked. I enjoyed Morell's writing style and his ability to keep you wrapped up in the story line. Morrell displays the tumultuous life of an addict. The cravings and the struggle with them. This is a great book that I highly recommend.

David Morell is the author of many mysteries and thrillers. Though sadly this is the first book I've read by him. I didn't even read the first book in this series. Yet. After I read this book I purchased the first book, Murder as a Fine Art. I believe it will be every bit as good as this book.


Praise for Inspector of the Dead

“Riveting! I literally thought I was in 1855 London. With this mesmerizing series, David Morrell doesn’t just delve into the world of Victorian England—he delves into the heart of evil, pitting one man’s opium-skewed brilliance against a society where appearances are everything, and the most vicious killers lurk closer than anyone thinks.” —Lisa Gardner, New York Times bestselling author of Crash & Burn and The Perfect Husband

What the Victorian Experts Say:

“Even better than Murder as a Fine Art. A truly atmospheric and dynamic thriller. I was fascinated by how Morrell seamlessly blended elements from Thomas De Quincey’s life and work. The solution is a complete surprise.” —Grevel Lindop, The Opium-Eater: A Life of Thomas De Quincey

“The scope is remarkable. Florence Nightingale, the Crimean War, regicide, the railways, opium, the violence and despair of the London rookeries, medical and scientific innovations, arsenic in the food and clothing—all this makes the Victorian world vivid. The way Morrell depicts Thomas De Quincey places him in front of us, living and breathing. But his daughter Emily is in many ways the real star of the book.” —Robert Morrison, The English Opium-Eater: A Biography of Thomas De Quincey

“I absolutely raced through it and couldn’t bear to put it down. I particularly liked how the very horrible crimes are contrasted with the developing, fascinating relationship between Thomas De Quincey and his daughter, Emily, who come across as extremely real. It was altogether a pleasure.” —Judith Flanders, The Invention of Murder: How the Victorians Reveled in Death and Detection and Created Modern Crime

David Morrell is an Edgar, Nero, Anthony, and Macavity nominee as well as a recipient of the prestigious career-achievement Thriller Master away from the International Thriller Writers. His numerous New York Times bestsellers include the classic espionage novel. The Brotherhood of the Rose, the basis for the only television mini-series to be broadcast after a Super Bowl. A former literature professor at the University of Iowa, Morrell has a PhD from Pennsylvania State University. His latest novel is INSPECTOR OF THE DEAD, a sequel to his highly acclaimed Victorian mystery/thriller, Murder as a Fine Art, which Publishers Weekly called ”one of the top ten mystery/thrillers of 2013.”

I have one print copy, open to US residents only. Here are the rules:
– Must be 18 or older to enter.
– Giveaway is open to US residents only..
– Only one entry per household.
– All giveaway entrants agree to be honest and not cheat the systems; any suspect of fraud is decided upon by blog/site owner and the sponsor, and entrants may be disqualified at our discretion

Monday, March 30
Review at Oh, For the Hook of a Book
Spotlight at Tales of a Book Addict

Tuesday, March 31
Interview & Excerpt at Oh, For the Hook of a Book

Wednesday, April 1
Review at With Her Nose Stuck in a Book
Guest Post at Mina's Bookshelf

Wednesday, April 8
Interview at Back Porchervations
Spotlight & Giveaway at Words and Peace

Wednesday, April 15
Review at So Many Books, So Little Time

Tuesday, April 21
Review at A Book Geek
Review at Books and Benches

Thursday, April 23
Spotlight & Giveaway at Passages to the Past