Anyone who knows me knows that I’m not exactly what you would call a ‘romantic’. So it’s ironic that I write Romantic Comedies where the heroine almost always falls in love with Mr.Right. There’s just something about romantic comedies that I adore.

It’s not the cheesy declarations of love, though I will admit scenes from certain Nancy Meyers films will bring a tear to my eye, but the hilarious element beneath them. I find joy in watching and reading scenes where the hero is about to do something that makes you cringe and laugh out loud at the same time. Where she, or he, says something so spot on about a situation that you can’t help but relate to it and shout ‘I SO get it!’

Romantic comedies can be fun, another reason why I love them. Despite the dramas and the plot twists encased in the story you can always depend on a few good laughs when reading one. Whether it’s a one liner or the hero creating a mess so ridiculous you cannot help but laugh through it.

I love how romantic comedies can bring you into scenarios that you’ve only dreamed about; candle light dinners at the mountain side or gala events where the dress you wear is so captivating everyone’s eyes are on you. I especially love how real romantic comedies can be. The heart-wrenching breakup that you never seem to get release from, the dread of being forever alone while everyone around you gets married or engaged and even the fear of leaving someone who you know is just not ‘the one’. There are always elements in these stories that can ring true in anyone’s life. That can make them ‘relatable’ and trace over our own anxiety’s just a little.

Most of all I love the secondary characters in these stories. The best friend who is always at the hero’s side, the group of girlfriends who help the hero go up against any obstacles standing in her way and even the hero’s family. As a reader I love stumbling upon one of these characters that reminds me of my best friends or one of my sisters. As much as I enjoy reading about them, I enjoy writing them. They can bring so much more into the story when written well, and their relationship with the main character can tell you quite a lot about hero.

These ‘Chick Lit’s’ never get enough credit in my opinion, and I hate the way they can be so easily dismissed as nothing but cliché. There is so much more in a romantic comedy than just the meet cute and dance of attraction between the hero and heroine.  Like Wild by Cheryl Strayed or Eat, Pray, Love by Elizabeth Gilbert, romantic comedies can often times instill hope just the same.

That’s why I truly adore them.  As I find myself saying quite often, ‘sometimes what a girl needs is to sit in the tub with a glass of wine and a great romantic comedy.’

*Vivian Brook’s first novel, All Because Of You, was released before Christmas 2014. You can find it via Amazon for your e-reader or in paperback+. She is also on twitter at @VivianB_Books * 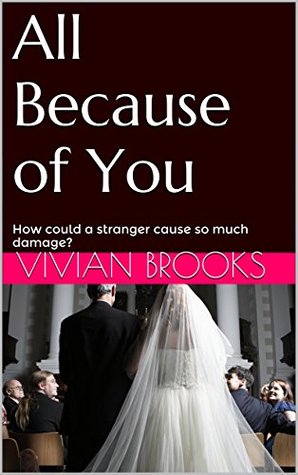 On the day of Nelly Morgan’s wedding, everything was going great. She had even forgotten the small fact that it was a rush wedding; her groom had a tendency to change his mind a lot. When an attractive foreign stranger ruins everything by professing his love for Nelly in the church full of family and friends, she is completely stunned. She would never cheat. She is the most trusting woman in the world!


After failing to prove to her fiancée that she has always been faithful
Nelly develops a plan to make her wedding crasher admit that they are strangers.
The only problem is, the wedding crasher is very positive they have met
and they did fall in love. Nelly is sure that the man is lying. She would remember if
she had been in love before wouldn’t she have? Wouldn’t anybody?

Soon Nelly finds herself in the middle of a battle with her psychic sister in law, caught
up in the middle of a string of robberies and being a victim of a ‘Cat-napping.’ Still, she
is as determined as ever to prove her love for her fiancée, and the lies of a handsome foreigner.
Vivian Brooks- Why I Love ‘Chick Lit’ Novels