Because hyenas are creepy looking?

Kidding. It’s actually a reference to Douglas Adams’s The Hitchhiker’s Guide to the Galaxy. In the Tertiary Phase (third season) of the radio show, the Hitchhiker’s Guide informs us (the listener) that according to the census, “every single person in the galaxy has 2.4 legs and owns a hyena.” It goes on to tell us that “Arthur Dent is strictly two legged and does not own a hyena that he knows of.” Well, I am also strictly two legged and do not own a hyena. And so there it is.

2. Your first book Critical Hit-On just came out in February. How nervous were you?

Reasonably nervous. I was pretty excited, but I was also nervous. Did I do this right? What if I messed that up? Did I spell check enough times? [Insert other random questions here.]

I’m still nervous, but I’m still excited, too. This self-publishing thing is a lot to take in, but it’s also a lot of fun.

3. In your own words, please tell our readers about your book.

It’s a contemporary-ish, new adult-ish romance about gamer geeks who fall in love through common interests and a lot of pop culture references. In a nut shell, it was a ton of fun to write. Fandom people and Big Bang Theory fans—this one’s for you.

4. What are some of the elements that you enjoy while reading a romance book? Did you include any of these when writing CHO?

Well, there’s the HEA, which I included because it’s a romance. Beyond that, I like romance series that include a close group of friends who stay close as each finds their other half. That’s a big part of CHO that will continue in the rest of the series.

5. I love a good romantic comedy. What are some of your favorites?

I don’t know if they are strictly romantic comedy, but The Stephanie Plum books are always fun. Neanderthal Seeks Human by Penny Reid is also quite awesome. 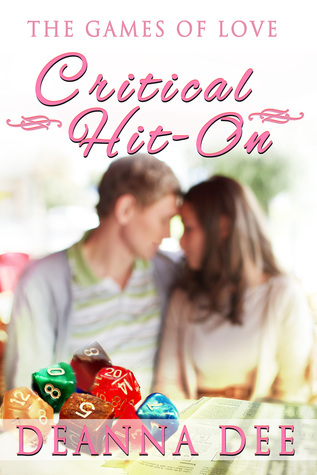 Molly Moreau used to be a geek with the best of them—role playing games, multi-user dungeons, trading cards—the works. Then she found her long-time boyfriend in a dark corner with a girl dressed as Lara “boobs and guns” Croft. That was it for the relationship and for her geekiness. After moving back home, she got a job at a normal bar and grill with normal people to live a normal life. That is until Craig shows up with his RPG character sheet.

Craig Lawrence has been rolling 1s on the relationship front ever since his last girlfriend broke up with him because he apparently spent too much time playing guardian to his rebellious little sister. When he meets Molly, he wants more than anything to win her heart, and this time he’ll do anything to keep his family problems from interfering.

When fate (Molly’s best friend) brings Craig and Molly together (sets them up on a date), will this relationship roll yet another 1? Or will it score a critical hit?

For a Thursday night, A’s Tavern is dead. All the better. We don’t need an audience for the not-so-drunken debauchery to follow. I stroll inside and head for the hostess desk, not bothering to hold the door for Parker. He’s a big boy. He can handle himself.
There’s a crash behind me, followed by a string of curses.
Or maybe he can’t. Should’ve known better. Parker’s a klutz. I’m a good friend, though. I keep walking and snicker.
Parker catches up to me and punches my shoulder. “You, my friend, are chimera excrement.”
I shrug. “I’ve been called worse. Keep up next time.”
“Two?” The host, clad in black pants and a red shirt—poor bastard—greets us and grabs a couple of menus.
“For now,” I say. “We’re expecting three more.”
Host pauses, and his eyes go glassy as if two plus three is calculus. Then he grabs three more menus. “Follow me.” He leads us to a rectangular table for six, where he practically drops the menus and silverware. Dude’s dex score is down with his int. “Your server will be right with you,” he says and then scurries back toward the front of the restaurant.
I mumble a thanks and sit. The tables around us are empty, so I pull my chair way out and make myself comfortable. In my twenty-one years, A’s hasn’t changed. The place looks like one of those old train stations. The top halves of the walls are white tile, and the bottoms are dark wood, a match for the tables and chairs. Monochrome tiles make up the floor, and a black-lacquered bar stretches the length of the restaurant. In honor of the recent Star Trek movie, there’s a neon sign over said bar advertising Free Tranya. I don’t know why they have free tranya, considering that line was from the original series and not the most recent movie, but there’s the sign. Only the second r is out. So it reads Free Tanya.
“Free Tanya.” Parker sits across from me and runs a hand over his black hair, which just makes it stick up more. Between that and the glasses, all he needs is green eyes instead of blue and a lightning scar on his forehead. “Now that, I can get behind.” And a less Weasley personality.
I scoot up to the table and am about to smack him over the head when a hand grabs my water glass and scares the hell out of me. I hit the back of my chair and look up at our waitress…our really hot waitress. Damn, how have I not noticed this girl before? Her brown hair reaches her shoulders, and her curves make the tasteless white-shirt-and-black-skirt ensemble of A’s uniform look good. My kind of girl.
“How you boys doing tonight?” she says in a strong, confident voice.
Definitely my kind of girl.
“Magnificently,” Parker says.
“Yeah?” She replaces my water glass and goes for Parker’s. “What can I get you to drink?”
Parker points to the bar. “I shall have the free Tanya.”
I kick him under the table.
He squeaks like a little girl. “Tranya.”
Waitress nods as if dorky twenty-something guys order free females all the time. “And you?” She turns to me, and her brown eyes meet mine. They’re the kind of eyes dead white guys wrote poetry about.
I’ll be a dead white guy someday. Perhaps I should join their ranks. Or perhaps I should order a drink before she notices I’m staring. “Have you had the tranya?”
“I have. I relished it.”
Whoa, girl knows her Star Trek. She and I might be the only twenty-somethings in 2009 America to know that episode. That decides my drink order. “As much as I will.”
Her eyes go wide, reflecting my amazement. Then, without warning, they’re serious again. “Two tranyas. Can I see some ID?” She barely glances at the cards before handing them back. “I’ll have those right out, and my name’s Molly.” She dashes toward the bar.
Well, so much for that.
“Critical miss,” Parker says, patting my arm. “Better luck next time.”