Review: Aoléon The Martian Girl: The Great Pyramid of Cydonia 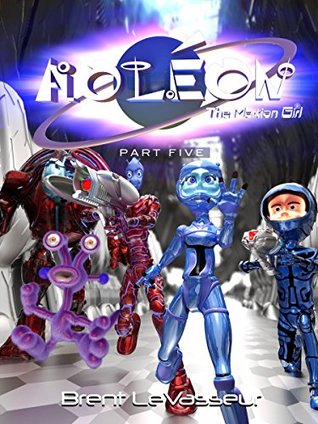 Aoléon, Gilbert, Bizwat, Helios, and Zoot make it to their final destination - Cydonia where Aoléon’s parents are being held captive. They infiltrate a secret underground base and are confronted by a small army of sentrybots.

Bizwat lends Aoléon and Gilbert some of his advanced combat skills via a psionic brain dump. However, this may not be enough to save them from overwhelming hostile forces that will do anything to stop them.

They finally meet Pax - the Martian who originally set them out on the mission to discover the truth about the Luminon and his plans to invade Earth. However Pax is not who he seems to be, and through a turn of events, they uncover the true power behind all that has been happening on Mars.

Will they be able to rescue Aoléon’s parents and save Earth from invasion?
Read part 5 to find out!

My thoughts:
Our intrepid heroes have finally made it to their final destination, or so they think. They are at the Great Pyramid of Cydonia. The action is fast and furious in this last installment of Aoleon the Martian Girl. Can they rescue Aoleon’s parents; can they stop the Luminon before the Earth and Mars are destroyed? You’ll have to read to find out, but let me tell you it’s worth every minute.

LeVasseur continues to amaze with a brilliantly told story. Even with the non-stop action, you continue to learn about and grow to love these characters. Gilbert continues to grow in his courage and his abilities. Aoleon’s compassion for all of her companions, especially Gilbert, deepens and is displayed beautifully. I really loved this story and found the episodic format enjoyable. Breaking it into smaller almost novellas makes it easy to stick with and makes you want to come back to it for more. I think its intended audience of middle schoolers will like it as well. This was one of the most fun books I’ve read in a while. I would love to see more from this author and from Aoleon and Gilbert.

Mr. LeVasseur enjoys crafting good stories based on lovable characters designed to translate well to multiple media formats such as books, games, movies, and toys. He lives in New York when he is not commuting between Southern California and Olympus Mons, Mars. His hobbies include writing, 3D animation, musical composition, and intergalactic space travel. He also enjoys various sports such as skiing, running, and exospheric skydiving.