The Scoundrel and the Debutante Excerpt and Giveaway 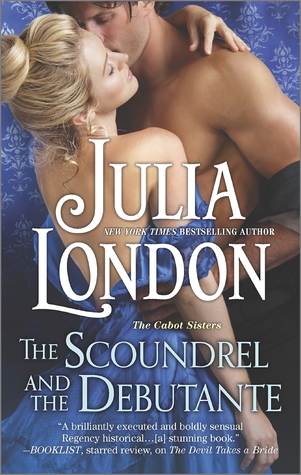 “London’s story is satisfying as it builds on the excellent chemistry of the leads, gracefully unfolding with the perfect amount of tension.” –Publishers Weekly

“This phenomenal story is written to perfection. The characters are endearing, smart, funny and full of emotion.” –RT Book Reviews

“As always Ms. London has created characters so real that you think you could call them up and have a conversation with them.” –Harlequin Junkie

“London weaves her usual magic with a deft touch and a sense of fun.”  –Romance at Random

It was an unspoken truth that when a woman reached her twenty-second year without a single gentleman even pondering the possibility of marriage to her, she was destined for spinsterhood. Spinsterhood, in turn, es- sentially sentenced her to the tedium of acting as com- panion to doddering dowagers as they dawdled about the countryside.

A woman without prospects in her twenty-second year was viewed suspiciously by the haut ton. There must be something quite off about her. It was impossi- ble to think otherwise, for why would a woman, prop- erly presented at court and to society, with means of dowry, with acceptably acknowledged connections, have failed to attract a suitor? There were only three possible explanations.


She was unforgivably plain. She was horribly diseased.

Or, her older sisters’ scandalous antics four years past had ruined her. Utterly, completely, ruined her.

The third hypothesis was presented by Miss Pru- dence Cabot days after her twenty-second birthday. Her hypothesis was roundly rejected by her scandalous older sisters, Mrs. Honor Easton and Grace, Lady Merryton.

In fact, when her older sisters were not rolling their eyes or refusing to engage at all, they argued quite vocifer- ously against her theory, their duet of voices rising up so sharply that Mercy, the youngest of the four Cabot sisters, whistled at them as if they were the rowdy pup- pies that fought over Lord Merryton’s boot.

Her sisters’ protests to the contrary notwithstand- ing, Prudence was convinced she was right. Since her stepfather had died four years ago, her sisters had en- gaged in wretched behavior. Honor had publicly pro- posed marriage to a known rake and bastard son of a duke in a gaming hell. While Prudence adored George, it did not alter the scandal that had followed or the taint it had put on the Cabots.

Not to be outdone, Grace had endeavored to entrap a rich man into marriage in order to save them all from ruin, and somehow managed to trap the wrong man. It was the talk in London for months, and while Grace’s husband, Lord Merryton, was not as aloof as Prudence had always heard, his entry into the family had not im- proved Prudence’s prospects in the least.

Nor did it help in any way that her younger sister, Mercy, had a countenance so feisty and irreverent that serious thought had been given to packing her off to a young ladies’ school to tame the beast in her.

That left Prudence in the middle, sandwiched tightly between scandals and improper behavior. She was squarely in the tedious, underappreciated, put-upon, practically invisible middle where she’d lived all her life. This, Prudence told herself, was what good manners had gotten her. She had endeavored to be the practical one in an impractical gaggle of sisters.

THE SCOUNDREL AND THE DEBUTANTE

The dust of the Cabot sisters' shocking plans to rescue their family from certain ruin may have settled, but Prudence Cabot is left standing in the rubble of scandal. Now regarded as an unsuitable bride, she's tainted among the ton. Yet this unwilling wallflower is ripe for her own adventure. And when an irresistibly sexy American stranger on a desperate mission enlists her help, she simply can't deny the temptation.
The fate of Roan Matheson's family depends on how quickly he can find his runaway sister and persuade her to return to her betrothed. Scouring the rustic English countryside with the sensually wicked Prudence at his side—and in his bed—he's out of his element. But once Roan has a taste of the sizzling passion that can lead to forever, he must choose between his heart's obligations and its forbidden desires.

Julia London is the New York Times and USA Today best-selling author of more than thirty romantic fiction novels. She is the author of the popular Cabot Sisters historical series, including The Trouble with Honor, The Devil Takes a Bride, and The Scoundrel and the Debutante. She is also the author of several contemporary romances, including Homecoming Ranch, Return to Homecoming Ranch and The Perfect Homecoming.
Julia is the recipient of the RT Bookclub Award for Best Historical Romance and a six-time finalist for the prestigious RITA award for excellence in romantic fiction. She lives in Austin, Texas.

Thanks to Media Muscle, I have one copy to giveaway to a lucky reader. You must be at least 13 years old to enter. Giveaway is open to US addresses only. Please read our entire giveaway policy before entering.