The Villain As Hero by Lisa Jensen

The Villain As Hero Lisa Jensen

I always thought Captain Hook was a lot more fun than Peter Pan, who just seemed like a cocky little boy with an attitude. But when I went back and re-encountered Peter Pan as an adult, I started to realize how horrible it must be for Hook, a grown man, to be stuck forever in this world of perpetual childhood, run by 11-year-old boys. That would be my vision of Hell! So I began to ponder the plight of Captain James Benjamin Hook, a witty, educated Restoration-era privateer cursed to play villain to a pack of malicious little boys in pointless war games that never end.
What, I wondered, had his life been like before the Neverland—as a child, a young blood about town, a gentleman privateer, a pirate? What on earth had he ever done to deserve this fate, designated nightmare to generations of storybook-reading children?
Long before I ever had a particular story in mind, I was writing dozens of scenes about the Neverland from Hook's perspective—which, as you can imagine, is very different from Peter Pan's. Turns out Hook had very strong, caustic opinions about the Neverland and its inhabitants: the Indian tribes, the diabolical fairies, the sinister mermaids. And, of course, The Boy.
The original Peter Pan story ends with Hook falling overboard and getting eaten by the crocodile, while all the children cheer. I thought this was a terrible ending for a character with so much potential. Suppose he didn't die? Suppose he was cursed to live forever, fighting bloody battles against the boys over and over again?
And then I started to wonder: what if he had one last chance to get out?
I realized I would need a new plot, not the same old story about the Darling children and Tinkerbell. I wanted my story to be James Hook's journey out of the fear and rage that have ruled his life for so long in the Neverland. For that to happen, I needed a catalyst, a new character J. M. Barrie never thought of.
The best way to shake things up would be to introduce into the little boys' club of the Neverland that most feared, mistrusted, and unexpected of creatures—a grown-up woman. Someone wise and forgiving enough to see the good in Hook as no one else ever had, but also open-hearted enough to appreciate the wondrous magical forces at work in the Neverland, forces that Hook has always thought were his enemies. Someone who could be a bridge between the two.
So my plot revolves around the new character I invented, Stella Parrish, a grown woman who dreams her way to the Neverland in defiance of the boy's rules against "ladies."  In James Hook, she sees someone far more complex and sympathetic than the usual storybook villain. With her help, he dares to cooperate with his "enemies," and risk everything for love, and for the chance to finally earn his release. To finally become the hero of his own story. 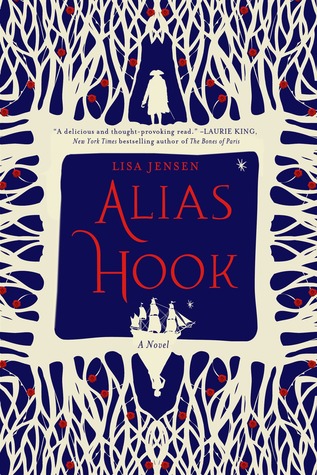 "Every child knows how the story ends. The wicked pirate captain is flung overboard, caught in the jaws of the monster crocodile who drags him down to a watery grave. But it was not yet my time to die. It's my fate to be trapped here forever, in a nightmare of childhood fancy, with that infernal, eternal boy."


Meet Captain James Benjamin Hook, a witty, educated Restoration-era privateer cursed to play villain to a pack of malicious little boys in a pointless war that never ends. But everything changes when Stella Parrish, a forbidden grown woman, dreams her way to the Neverland in defiance of Pan's rules. From the glamour of the Fairy Revels, to the secret ceremonies of the First Tribes, to the mysterious underwater temple beneath the Mermaid Lagoon, the magical forces of the Neverland open up for Stella as they never have for Hook. And in the pirate captain himself, she begins to see someone far more complex than the storybook villain.


With Stella's knowledge of folk and fairy tales, she might be Hook's last chance for redemption and release if they can break his curse before Pan and his warrior boys hunt her down and drag Hook back to their neverending game. Alias Hook by Lisa Jensen is a beautifully and romantically written adult fairy tale.

“Jensen’s wonderful imagination and devotion to history and myth allow the reader to fly with her through this outstanding adventure – no fairy dust required.”
—Publishers Weekly
“Scintillating description and deep characterization make Jensen’s (Witch from the Sea) Neverland a psychologically intriguing place to visit. Following in the footsteps of Gregory Maguire, Carolyn Turgeon, and Frank Beddor, Jensen offers a humanized take on Captain Hook that will be sure to entertain…”
—Library Journal
Alias Hook Guest Post Lisa Jensen